The Economic Costs of Congestion in Metro Vancouver

GLOBE-Net, March 9, 2015  – The C.D. Howe Institute, in collaboration with Clean Energy Canada and the Real Estate Foundation of British Columbia, has released an important E-Brief on the Economic Costs of Congestion in Metro Vancouver.

The E-Brief, authored by Benjamin Dachis, a Senior Policy Analyst, at the C.D. Howe Institute, concludes that the economic costs of congestion – both the hidden and the visible costs – are large.

Reducing the hidden costs alone, notes Dachis, would enable broader agglomeration economies, and new job opportunities, that could raise the incomes by up to $950 per worker per year. This increase in incomes is complementary to the visible savings from reduced congestion.

By way of background, in an upcoming plebiscite, voters across the 21 municipalities in Metro Vancouver will soon decide whether to approve a Mayors’ Council Transportation and Transit Plan designed to improve and expand the region’s transit and transportation system to be financed with a region-wide 0.5 percentage point increase in the Provincial Sales Tax. 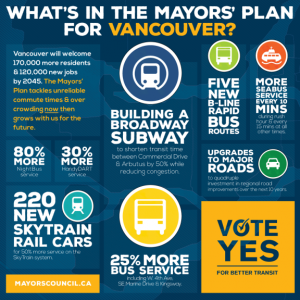 The Mayors’ Council Plan estimates traffic congestion will be reduced by 20%, allowing drivers and transit users to save 20 to 30 minutes per day on commutes through some of the region’s most congested corridors.

This would mean drivers would spend less time stuck in traffic and improved transit services would offer a real alternative to driving. Transit users would benefit from new and more frequent bus services and an expanded rail system.

What are the economic costs of congestion in Metro Vancouver?

When congestion causes people to not travel it stifles the key benefits of living in a city: learning face-to-face, finding better jobs, and sharing services and infrastructure. Because of congestion, workers do not take jobs that are the best fit for them. Companies lose out, because the pool of workers they may draw from is shallower than would otherwise be the case.

Dachis estimates that on top of the cost of congestion due to slower travel, these wider, hidden costs of congestion range between $500 million and $1.2 billion per year for the Metro Vancouver area.

He cautions that the costs of congestion from the Mayors’ Council estimates and the wider, hidden costs of congestion he has calculated cannot simply be added to one another. They are based on separate studies employing different approaches that, while complementary, are not cumulative.

Do the Total Benefits of Reduced Congestion Outweigh the Cost of New Taxes?

Summing up, Dachis concludes that if the one-third reduction in the cost of congestion as a result of the Mayors’ Council’s plan were in place today:

Overall, with a number of caveats related to how the additional $750 million per year in investments envisaged by the Mayor’s Council Plan are to be financed above and beyond the estimated $250 million of tax revenue the province will collect from the increased provincial sales tax, Dachis concludes that the economic benefits of the Plan far outweigh the costs of the new taxes.

It is of note that the economic calculations that support the E-Brief do not include environmental or health benefits arising from reduced congestion and a more efficient transportation system.

The full E-Brief is available here.

Energy-related emissions stalled in 2014 – Is this a sign of change?