Water has emerged as the target of choice for the robber barons of globalization. As freshwater supplies dwindle, global investors are scrambling to own what’s left. The World Bank already values water privatization at $1 trillion and predicts that many of the wars of the 21st century will be fought over water.

And the wars have already begun as citizens in South and Central America have fought back against water moguls whom they regard as bullies trampling democracy and basic human rights. When Bechtel, in 2000, privatized the Bolivian city of Cochabamba’s water and then raised rates high enough to threaten the lives of poor residents, the city erupted in deadly violence.

The “Bolivian Water War” ejected Bechtel and toppled the city government. Control of Syrian waters by corporate agriculture during a prolonged drought helped trigger the current rebellion there. Today, Chile is effectively a neo-colonial vassal after the Pinochet dictatorship sold her rivers (along with her forests, minerals, and even roads, railroads and airports) to foreign syndicates. Chile’s leading human-rights lawyer recently told me, “Today, Chile has only the trappings of democracy, since we have no sovereignty over the resources of our nation.”

Could this happen in the United States? It already is. Chinese and European sovereign wealth funds and global private-equity firms are taking control of America’s waterways by purchasing the assets of industrial companies which once held hydropower licenses granted by the Federal Energy Regulatory Commission (FERC), which, ironically, was established to keep the nation’s waterways in public ownership and to assure that the waters are used for public not private benefit.

These machinations are reminiscent of the Gilded Age, when aluminum and steel companies dammed America’s rivers to power their smelters, routinely corrupting state legislatures and federal officials to win exclusive licenses to privatize public waterways. Teddy Roosevelt warned in 1915, “Keep your eye on the aluminum company that is trying to get control of your water powers. I have no objection to big business making money but I do not want it to make it at the expense of the public interest.”

Like most Americans of his era, Teddy Roosevelt regarded the control of our nation’s waterways as a central concern of democratic governance. Commonwealth assets like rivers and streams, he believed, should not be held by private interests for private gain.

In 1920, Congress heeded his warning and passed the Federal Water Power Act. Renamed the Federal Powers Act in 1935, this statute created the Federal Energy Regulatory Commission (FERC) to protect the public interest. The law recognized that a permit is a giving away of public treasure, and provided that rivers could only be dammed and water diverted to private users when it served a compelling public benefit.

In return for permits to build privately owned dams and divert waterways from traditional recreational, agricultural and drinking-water purposes, FERC required proof that these plants would bring jobs and prosperity to watershed communities. But, since 1935, FERC has never refused to renew or transfer any hydropower license. And, as the old permits expire, the enfeebled agency is allowing industrial companies to close their factories and effectively sell our rivers to foreign investors without any meaningful demonstration of a public benefit.

Here is an example of how it works: In the 1950s, FERC issued the Aluminum Company of America (Alcoa) a 50-year license to operate five hydroelectric dams on the Little Tennessee and Cheoah Rivers. The project’s primary purpose was to support Alcoa’s aluminum smelter and rolling-mill operations in Alcoa, Tennessee, which were the region’s principal sources of employment.

To win the FERC license, Alcoa had to prove that its hydroelectric facilities would drive economic activity and bring prosperity. The license gave the company ample time to recover its capital investment. The license also limited free access to river water for citizens, towns and other users at a particular level, and required them to pay Alcoa to divert river water above that level for drinking, agriculture or industrial needs. FERC permittees effectively owned the river.

Alcoa applied to renew its license in February 2003, and on January 25, 2005, FERC awarded the company a new license without requiring any written guarantee that the company would maintain its manufacturing jobs, which were worth $400 million to the local economy. Subsequently, Alcoa shuttered the bulk of its facility and laid off 450 workers.

In 2010 Alcoa refurbished one of the dams with $12 million in federal subsidies. Then, in March 2012, the company suddenly shuttered the remainder of its Tennessee smelter plant and sold its newly minted license and its hydroelectric facilities for $600 million to Brookfield Asset Management. Brookfield now owns 25 percent of the Alcoa facilities. The remaining 75 percent is owned by global institutions and foreign governments, including China, whose investments Brookfield manages.

The new owners have no obligation to benefit the region’s economic interests. Private control of public water resources will inhibit economic growth, and the project will no longer drive industrial activity in Tennessee and North Carolina. As water becomes more scarce and electric rates rise, the new owner will charge local governments, farmers and water consumers higher rates.

With no control over the bulk of river flow, localities will lose the flexibility to deal with extended water-shortages. The dams will simply enrich Brookfield and its global investors by producing wholesale power for sale to the highest bidder. The profits will leave the United States.

With $200 billion in assets, and more than 10 percent of FERC licenses in its portfolio, the company has acquired over 130 hydropower generating-stations and 30 river systems in the United States – more than any other FERC license holder. And Brookfield is only one of a spate of foreign-owned private equity firms racing to privatize America’s waterways for profit.

Alcoa appears to be re-deploying the same strategy it used on the Little Tennessee and Cheoah Rivers on North Carolina’s Yadkin River. In 2007, Alcoa closed its Yadkin smelter, fired its workers, and began selling electricity from the Yadkin’s four dams outside North Carolina, generating $30 million for the company last year alone. Despite fierce local opposition, Alcoa is applying to renew its Yadkin power license.

FERC will almost certainly give Alcoa kneejerk support to relicense its dams and then sell the river to the highest bidder. Since the passage of the 1935 Federal Power Act, FERC has never refused to renew or transfer any hydropower license.

FERC ’s practice, in contrast, has been to grant exclusive use of our water resources to private companies and foreign governments and corporations to generate hydroelectricity and seize de facto control of public waters for 30 to 50 years, without regard for the mandates for public benefit the Federal Power Act stipulates. 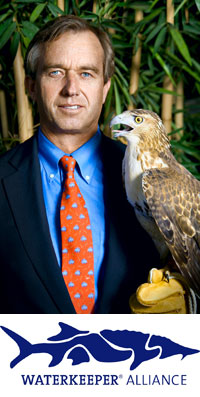 Robert F. Kennedy, Jr., Founder and President of Waterkeeper Alliance. The Waterkeeper Alliance (www.waterkeeper.org ) and its members fight every day around the globe for their local waterways and landscapes and embody the 1935 Federal Power Act’s original intention to “promote the development of safe, reliable and efficient energy infrastructure that serves the public interest.”

A keynote Speaker at GLOBE 2014, Mr. Kennedy serves as Senior Attorney for the Natural Resources Defense Council, Chief Prosecuting Attorney for the Hudson Riverkeeper and President of Waterkeeper Alliance. He is also a Clinical Professor and Supervising Attorney at Pace University School of Law’s Environmental Litigation Clinic and is co-host of Ring of Fire on Air America Radio. Earlier in his career he served as Assistant District Attorney in New York City. This article first appeared in the March 2015 edition of the GREEN MONEY JOURNAL, and is reprinted here with the kind permission of the author.

The Rise of Triple-Bottom-Line Businesses