GLOBE-Net, April 25, 2013 – Six countries – the US, Japan, UK, France, South Korea and China have been named by KPMG International as the most active in using tax as a tool to drive sustainable corporate behavior and achieve green policy goals.

The finding is contained in the first KPMG Green Tax Index, launched today at the 2013 KPMG Asia Pacific Tax Summit in Shanghai. The Green Tax Index* explores how governments are using their tax systems to respond to global challenges including energy security, water and resource scarcity, pollution and climate change.

The Green Tax Index is intended to raise corporate awareness of the rapidly evolving and complex global landscape of green tax incentives and penalties, and to encourage tax directors and sustainability chiefs to work together to factor green tax considerations into investment decisions. 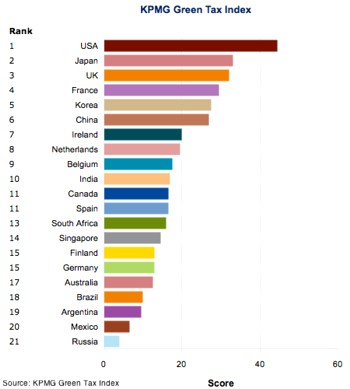 “A multitude of challenges are facing tax functions worldwide. And, yes, this is an area of tax management requiring time, effort and dollars. However, if addressed with knowledge and pro-activity, the challenges can be opportunities.”

“Our analysis shows that at least 30 new green tax incentives, penalties or significant regulation changes have been introduced in the countries we studied since January 2011. A pro-active approach to green tax can help companies reduce the cost of strategic investments, drive innovation, improve efficiency and secure competitive advantage.”

The KPMG Green Tax Index shows that governments are using tax beyond the policy areas of energy and carbon to address resource efficiency more broadly and to spur green innovation. Simply being aware of all the relevant instruments in place in all the markets where a company operates is in itself a significant challenge, particularly for multinationals. Resources and attention are often focused first and foremost on compliance with penalty legislation.

This means that, too often, insufficient importance is attached to strategic responses that could reduce exposure to those penalties. Without a proactive approach to green tax incentives, opportunities can be missed and the sums involved can be significant.

The study notes there are big opportunities to be grasped beyond cost reduction. Green tax incentives can make projects feasible that will help companies reshape their business and develop new markets, products and services.

More details on the report findings from the KPMG Green Tax Index can be found here.

*The  KPMG Green Tax Index attributes scores to green tax incentives and penalties according to arguable value and potential to influence corporate behavior. Scores should be taken as indicative, not absolute, in providing a view of governments with the most active and developed green tax systems in place.