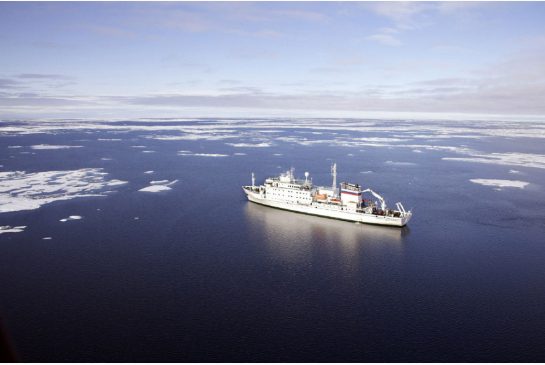 LONDON, 4 August, 2015 – The disappearing Arctic ice cap will boost trade between north-west Europe and countries such as China, Japan and South Korea by making the sea routes far shorter, according to economic analysts.

The new sea route will alter world trade, making northern countries richer, but causing serious problems for Egypt, which will lose a large chunk of revenue currently gained from ships coming through the Suez Canal.

One advantage to the environment − according to a discussion paper from the Netherlands Bureau for Economic Policy Analysis − is that ships will burn far less fossil fuel to reach their destination.

However, this gain will be offset when the volume of trade increases because of the shorter sea route, making climate change slightly worse.

The northern sea route is already open in the summer months, but the paper predicts that it will be available all year round by 2030, or possibly sooner. It says that Arctic ice is melting faster than predicted by scientists.

To police the new route, the Russian government has already formed a federal state institution and is building 10 “relief ports” along the Siberian coastline for ships that might need repairs or supplies. China has signed a free trade agreement with Iceland in anticipation of regularly using the route.

The paper estimates that trade between north-west Europe and China, Japan and Korea will increase by 10% as a result of the opening of the route, but that this will happen gradually.

The northern route will become one of the busiest shipping lanes in the world, increasing the economic and political importance of the Arctic

Since 90% of world trade by volume is carried by ship, the distance between ports is a vital consideration. The northern route reduces the distance from Japan to north European countries by 37%, from South Korea by 31%, China 23%, and Taiwan 17%.

The advantage of shorter distances applies only to countries in northern East Asia. For countries south of the equator, such as Singapore and Indonesia, the southern route via Suez is still shorter.

Similarly, southern European countries do not gain because they remain roughly the same distance away from their trading partners whichever route they use.

The countries in Europe that will gain most from the new sea route are those with access to ports on the North Sea and the Baltic. These include Austria, Belgium, the Czech Republic, Denmark, Estonia, Finland, Germany, Ireland, Latvia, the Netherlands, Poland, Slovakia, Sweden, the UK and Norway.

Some countries in eastern and southern Europe would experience a drop in trade because of the comparatively longer distances their exports and imports would need to travel, according to the report. These include Bulgaria, Croatia, Hungary, Italy, Romania and Slovenia.

The report says that roughly 8% of world trade goes through the Suez Canal, and that two-thirds of this volume will go via the shorter Arctic route. The northern route will become one of the busiest shipping lanes in the world, increasing the economic and political importance of the Arctic.

At the same time, it will put huge economic pressure on Egypt and Singapore, who rely heavily on shipping using the southern route.

Over time, the opening of the Arctic route will have knock-on effects on jobs and prosperity in all the countries concerned, but it is predicted that this will be a gradual rather than sudden process. – Climate News Network

Is Canadian hydropower the solution to Northeast’s high energy prices?

Venture capital activity surges for first half of 2015