GLOBE-Net, September 8, 2016 – Air pollution has emerged as the deadliest form of pollution and the fourth leading risk factor for premature deaths worldwide says a new World Bank report. Those deaths cost the global economy about US$225 billion in lost labor.

The total number of deaths attributable to air pollution was estimated to be 5.5 million in 2013, roughly 2.75 million of which were of people over the age of 70. 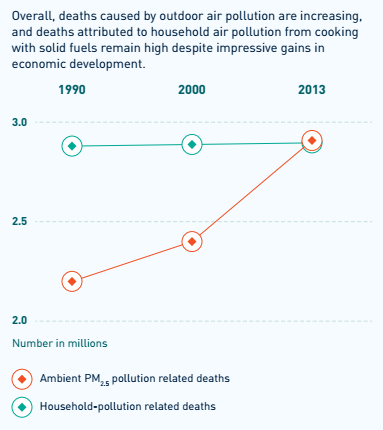 The study, The Cost of Air Pollution: Strengthening the Economic Case for Action, was carried out in partnership with the Institute for Health Metrics and Evaluation.  It details several key challenges that make air pollution so tricky to recognize as a health risk.

The first challenge is that air pollution targets poor countries, and the predominantly the poorest citizens of those countries.

The second is that those who die first as a result of air pollution are the young and the elderly. For the working age population bad air conditions accelerate deaths.

While the loss of life from air pollution is huge, the economic consequences of poor air quality are generally not well understood by policy makers.

As noted by Laura Tuck, Vice President for Sustainable Development at the World Bank, “Air pollution is a challenge that threatens basic human welfare, damages natural and physical capital, and constrains economic growth. We hope this study will translate the cost of premature deaths into an economic language that resonates with policy makers so that more resources will be devoted to improving air quality.”

Deaths by household air pollution have remained steady despite gains in health care. Burning wood, charcoal, coal and even dung indoors to cook and warm houses is highly detrimental to human health.  Such practices are widespread among the poorer populations of lower and middle income countries. 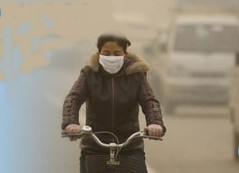 Outdoor ambient pollution is usually the result of fine particulates such as carbon, sulfate, nitrate and occasionally heavy metals. Deaths from ambient pollution have risen sharply, mainly in the developing world. This is another face of climate change.

Fine particulates, which measure roughly 1/30th the width of a human hair can penetrate the body’s defenses to reach the blood stream, causing lung cancer and heart disease among other health problems.

World Health Organization guidelines state that less than 10 micro grams per cubic metre is safe, but there are large areas of the developing world in China, India and Africa, where particulate levels are above 35 micro grams, and in many areas higher than 10 and 35 micro grams. 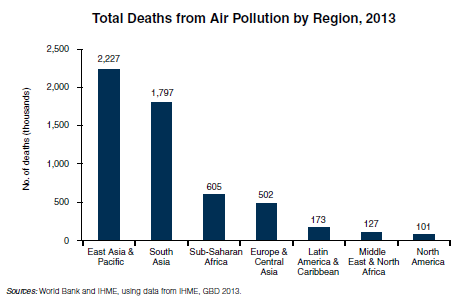 In 2000, estimated labour output losses were 163 Billion USD. In 2013 the losses grew to an estimated 225 Billion USD. Despite improving quality of healthcare and rising wealth, air pollution is growing steadily and with it, economic and social losses. The graph below shows as a percentage of GDP, how much each region is losing. 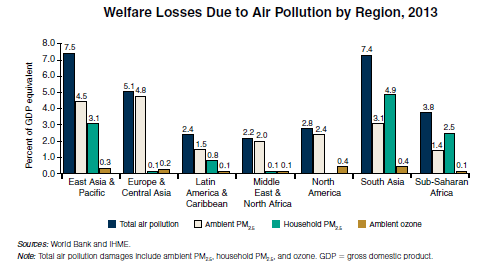 The results can be devastating, especially for South Asia, where the loss of nearly 1 percent of GPD annually represents 66 Billion USD. This measure reflects only lost output by labour earnings.

When the calculations are expanded to include a wider variety of inputs, such as consumption, leisure time, good health, and even simply being alive, the economic costs become much more significant. Measured below as a percentage of GDP by region, the total global cost for 2013 was 5.11 Trillion USD.

This is a problem of the commons, as the particulate pollution is so fine that it is hard to measure, and the solid fuels is use today have been used for a very long time. Solving this problem means changing status quos, challenging long held traditions and regulating and reducing use of cheap, easy sources of power such as coal.

Dr. Chris Murray, Director of IHME noted, “Of all the different risk factors for premature deaths, this is one area, the air we breathe, over which individuals have little control.”

This is a problem for policy makers, and the World Bank hopes this report helps provide the economic arguments and backing to be heard in a world where resources are scarce, and where there are many other pressing demands.

The Majority of the World’s Population Lives in This Circle