Carbon capture and storage, if it proved possible, would help to make the main greenhouse gas harmless. American scientists say they are making progress.

LONDON, 20 April, 2015 – Two groups of US scientists are exploring new ways of capturing carbon dioxide from the atmosphere. One technology mimics the tree by using artificial photosynthesis. The other exploits a membrane that is a thousand times more efficient than any tree.

Although the nations of the world agreed in 2009 to attempt to limit the global warming temperature rise this century to no more than 2°C above pre-industrial levels, colossal quantities of the greenhouse gas carbon dioxide are still being emitted into the atmosphere.

So some researchers have been exploring the technology of carbon capture and storage (CCS): ways of trapping CO2 as it leaves the power station chimney or machinery exhaust and storing it for burial or reuse. Others have proposed “artificial trees” that could remove the gas from the atmosphere.

Now a team from the Howard Hughes Medical Institute, the Lawrence Berkeley National Laboratory, and the University of California at Berkeley report in the journal Nano Letters that their “potentially game-changing” technology could capture CO2 emissions before they get into the atmosphere and then use solar energy and water to turn the captured gas into the chemical substance acetate.

Once in acetate form, the substance could be the basis of pharmaceutical drug manufacture, biodegradable plastic feedstock, or even liquid fuel.

Direct solar-powered production of value-added chemicals from CO2 and H2O, a process that mimics natural photosynthesis, is of fundamental and practical interest. In natural photosynthesis, CO2 is first reduced to common biochemical building blocks using solar energy, which are subsequently used for the synthesis of the complex mixture of molecular products that form biomass.

Nanotechnology – engineering at precisions of a millionth of a millimetre – exploits a “forest” of light-capturing “nanowire arrays” dosed with selected populations of a bacterium calledSporomusa ovala to filter the flue gases for carbon dioxide. This inventive double act of silicon and a carbon-based life form then performs a conjuring trick called photo-electrochemistry: from the captured gas it delivers acetic acid, and it can go on doing so for about 200 hours.

A second bacterium – genetically engineered Escherichia coli – can then get to work on the product and turn it into acetyl coenzyme A as the starting point for a range of valuable chemical products. These could range from a precursor to the anti-malarial drug artemisinin to the fuel butanol.

“We believe our system is a revolutionary leap forward in the field of artificial photosynthesis,” said one of the authors, Peidong Yang of the Berkeley Lab. “Our system has the potential to fundamentally change the chemical and oil industry in that we can produce chemicals and fuels in a totally renewable way, rather than extracting from deep below the ground.”

The research continues. Right now, this sample of solar-powered green chemistry is about as efficient as nature’s original chemical plant: the leaf. But another team, according to Physics World, have a prototype that is a thousand times better than a tree as a “sink” for the carbon in carbon dioxide.

Klaus Lackner of Arizona State University’s Centre for Negative Carbon Emissions and colleagues are testing a synthetic membrane that can capture carbon dioxide from the air that passes through it.

The technology is based on a resin that works in dry atmospheres (in humid environments it actually releases the carbon dioxide, so it wouldn’t work everywhere). Prototype collectors trap between 10% and 50% of all the carbon dioxide that blows through the membrane.

A novel synthetic material that is a thousand times more efficient than trees at capturing carbon dioxide from the atmosphere was presented by Klaus Lackner, director of Arizona State University’s new Center for Negative Carbon Emissions.

The trapped CO2 could then be stored in a container, and either shipped off for deep, long-term burial or exploited in some way, perhaps as the raw material for liquid fuel. How the technology could be exploited demands a little further investigation. There are plans to test the membranes on the laboratory’s roof in Arizona.

But it is one thing to efficiently collect carbon dioxide: another to deal with it. Dr Lackner estimates that it would demand about 100 million receptacles the size of shipping containers to hold the carbon dioxide now emitted from the planet’s factories, vehicles and power stations. 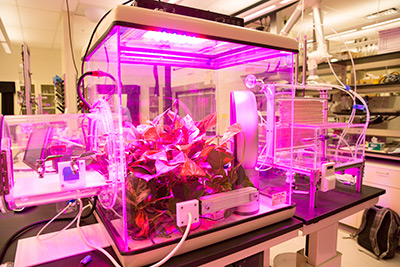 “I believe we have reached a point where it is really paramount for substantive public research and development of direct air capture,” he told the American Physical Society meeting in Maryland. “The Centre for Negative Carbon Emissions cannot do it alone.” – Climate News Network