Former key figure in UN climate change policy-making says economists now see that development without destroying the environment is the only way forward.

LONDON, 2 November, 2015 − In a world entirely divorced from the politics and rhetoric surrounding the continuing climate change negotiations, countries are quietly getting on with rapid development combined with environmental protection. 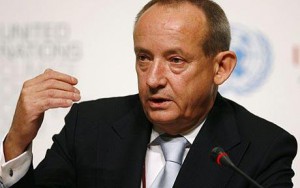 former executive secretary of the United Nations Framework Convention on Climate Change, has found renewed hope and a different perspective as the Director-General of the Global Green Growth Institute, which he is running from Seoul in South Korea.

“People in Asia have moved away from the idea that development comes first and then we can then worry about the environment,” he says. “Here, there is terrible poverty, but they have realised that the development, social inclusion and protecting the environment must go hand in hand.”

He said it was clear from talking to economists at the International Monetary Fund and the Organisation for Economic Co-operation and Development in Paris that they too realise that clean development is not just the best way forward but the only way.

“In the last decade, their economic thought has advanced light years,” he told Climate News Network.

“Everyone is now thinking how they can avoid the mistakes that Europe made and China copied. How can we develop without destroying our environment? As renewables get cheaper and cheaper, it gets more and more possible.”

The Institute is working in countries as diverse as China, Ethiopia, Fiji, Jordan and the United Arab Emirates to advise governments on twin development and environment plans.

“Countries are now demonstrating how to do this on the ground,” De Boer said. “China, for example, fully understands that it cannot continue with development that poisons its water and its air and uses up and degrades its agricultural land. It is tackling the problems and using them as a spur to clean development.

“At the other end of the scale, Fiji has a fast-growing economy that is protecting its environment at the same time.”

He said that despite the fact that the forthcoming climate change negotiations in Paris seem to be dominated by what the big players − the European Union, the US and, to a lesser extent, China – will do, he is hopeful about the talks.

“Paris seems to be shaping up well, and I say that conscious of the fact that there are many, many, areas of disagreement,” he said. “The biggest issue of all is finance. If that can be resolved, then a lot of other problems can be far more easily overcome.”

Although pledges from the industrialized world for green funds to help the developing world adapt to climate change and adopt clean technologies are short of required targets, De Boer believes there is “plenty of capital available”.

He said that with interest rates at rock bottom − sometimes even negative − and government bonds giving no yields, pension funds that used to invest in fossil fuels are looking for new safer places for their money.

“With the right signals from politicians − and Paris is the right place to do it − then the capital will follow,” he said. “It is all down to political will, and it is easier now to have the political courage because everybody now understands the climate science and the impacts of climate change are becoming much clearer.”

He said it was also easier because the cost of renewables has dropped so rapidly, making them the sensible option and a choice for investment.

Despite his optimism about Paris, he said it was still clear that all the pledges that nations had made were not sufficient to keep the temperature from increasing above the danger level of 2˚C. “The challenge,” he said, “is to find the economic arguments that allow you to be environmentally courageous.” – Climate News Network

How 5 Global Brands Use Renewable Energy

The Top 3 Ways to Accelerate Growth and Dominate Your Market