Electricity from renewables now as cheap as fossil fuels

31 August 2015 – The cost of producing electricity from renewable sources like wind and solar has been falling for several years.

Now, a new report provides in detail the contrasting costs for different power generation technologies around the world and shows that renewable sources can produce electricity at close to or even below the cost of new fossil fuel-based power stations.

The report, Projected Costs of Generating Electricity: 2015 Edition, also shows that new nuclear power plants generate electricity more cheaply than other established “baseload” sources such as coal- and gas-fired power plants over the full lifetime of facilities when financing costs are relatively low.

The report, a joint project by the International Energy Agency and the Nuclear Energy Agency, calculates the cost of producing electricity from different types of new power plants.

Compared with the previous edition published five years ago, Projected Costs of Generating Electricity: 2015 Edition details a significant drop in the price of solar and wind generation costs, especially for solar photovoltaic (PV) installations, as a result of sustained technological progress. That drop, as well as a plateauing in the price of new nuclear energy plants, helped arrest cost inflation in electricity generation over the past five years.

The cost drivers of the different generating technologies remain both market- and technology-specific. As such, there is no single technology that can be said to be the cheapest under all circumstances

No single technology proves the cheapest form of electricity generation under all circumstances: many factors determine the final cost of any investment, principally local influences such as market structure, policy environment and resource endowments.

Projected Costs of Generating Electricity: 2015 Edition looks at generation costs at more than 180 plants – from large nuclear and fossil-fuel facilities to wind farms to residential-sized solar PV installations – in 22 countries, including Brazil, China and South Africa.

The data were used to project, country by country and for the different technologies, what it would cost to generate electricity over the lifetime of a plant built to enter service in 2020. The report’s standardised form of analysis, levelised cost of electricity (LCOE), displays the cost range of generation in each country for each technology, based on three discount rates.

While the costs of renewable technologies in some higher priced markets can be well above that of coal- or gas-fired plants, the report details how utility-scale solar PV and especially onshore wind power are comparable and often lower in countries featuring plentiful resources and appropriate market and regulatory frameworks. 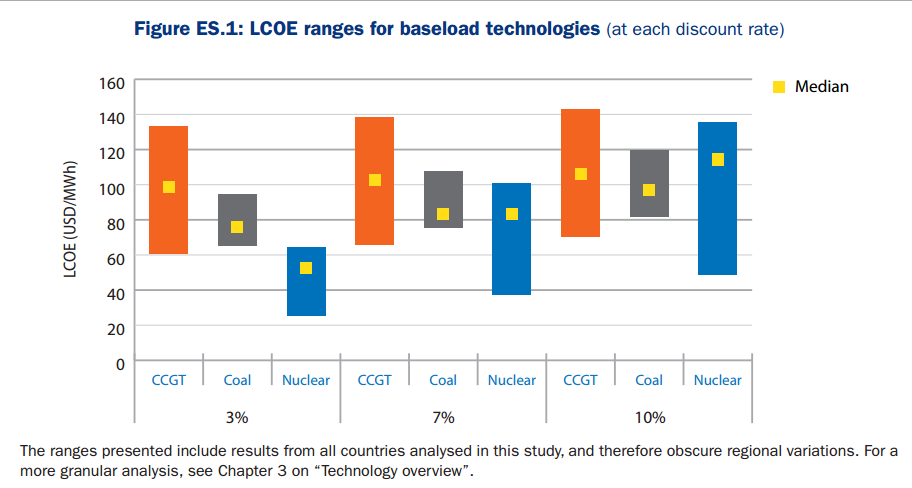 Further, while more significant regional variations remain than for baseload technologies, variable renewable technology costs continue to converge towards international benchmarks at the lower end of their cost range.

Projected Costs of Generating Electricity: 2015 Edition looks even further into the future by examining the potential cost of emerging technologies like ocean energy and fuel cells.

The report also discusses the value and cost of generation from the perspective of the power system as a whole, examining other relevant cost metrics that may be more appropriate for a world where the concept of baseload power is of declining relevance.

Projected Costs of Generating Electricity: 2015 Edition, the eighth report in a series of studies on the costs of power generation, is available for sale from the IEA Bookshop.

To see the presentation given during the launch webinar, please click here.

Extreme Water Shortages are Expected to Hit These Countries by 2040