Paris, November 9, 2015 – A further sharp downturn in emerging market economies and world trade has weakened global growth to around 2.9% this year – well below the long-run average – and is a source of uncertainty for near-term prospects, says the OECD.

In its latest twice-yearly Economic Outlook, the OECD projects a gradual strengthening of global growth in 2016 and 2017 to an annual 3.3% and 3.6% respectively. But a clear pick-up in activity requires a smooth rebalancing of activity in China and more robust investment in advanced economies.

Presenting the Outlook in Paris, OECD Secretary-General Angel Gurría said: “The slowdown in global trade and the continuing weakness in investment are deeply concerning. Robust trade and investment and stronger global growth should go hand in hand. G-20 leaders meeting in Antalya need to renew their efforts to secure strong, sustainable and balanced growth.”

US output on solid growth trajectory, propelled by household demand, with GDP expansion expected to be 2.5% next year and 2.4% in 2017.

In the US, output remains on a solid growth trajectory, propelled by household demand, with GDP expansion expected to be 2.5% next year and 2.4% in 2017.

The recovery in the euro area is set to strengthen, helped by accommodative monetary policy, lower oil prices and an easing of the pace of budget tightening. Euro area activity is expected to grow by 1.8% in 2016 and 1.9% in 2017.

In Japan, recovery was derailed in 2015 by a sharp slowdown in demand from other Asian economies and sluggish consumption. Japan’s GDP growth is expected to accelerate to 1.0% next year, but to slow to 0.5% in 2017 due to the planned consumption tax hike.

Economic growth in China is projected to slow to 6.8% in 2015 and to continue to decline gradually thereafter, reaching 6.2% by 2017, as activity rebalances towards consumption and services. Achieving this rebalancing, whilst avoiding a sharp reduction in GDP growth and containing financial stability risks, presents significant challenges.

Economic growth in China is projected to slow to 6.8% in 2015 and to continue to decline gradually thereafter

In other emerging economies, headwinds have generally increased, reflecting weaker commodity prices, tighter credit conditions and lower potential output growth, with the risk that capital outflows and sharp currency depreciations may expose financial vulnerabilities. Brazil and Russia have experienced recessions and will not return to positive growth in annual terms until 2017. By contrast, growth prospects in India remain relatively robust, with GDP growth expected to remain over 7% in the coming years, provided further progress is made in implementing structural reforms.

The Outlook calls for greater ambition by OECD and G20 countries in supporting demand and pursuing structural reforms to boost potential growth and ensure that its economic benefits are shared by all.

It calls for policies to support short-term demand, including on-going monetary and fiscal policy support in accordance with countries’ policy space. Collective action to increase public investment is essential and would increase growth without increasing debt-to-GDP ratios. 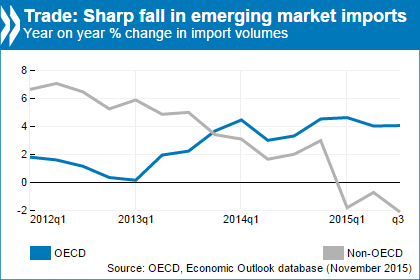 The Economic Outlook also includes a scenario for the global impact of weaker demand growth in China and discusses a number of other issues including: rising US policy interest rates and spill-overs to emerging market economies; growth shortfalls in the euro area and Japan; revisions to potential output growth; and the impact of an increase in public investment in OECD economies.

Further information about the Economic Outlook is available here .

About the OECD: Working with over 100 countries, the OECD is a global policy forum that promotes policies to improve the economic and social well-being of people around the world.

Low prices should give no cause for complacency for energy security