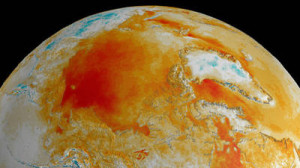 LONDON, 27 February, 2016 – Greenhouse gases could tip the Earth – or at least a planet like Earth, orbiting a star very like the Sun – into a runaway greenhouse effect, according to new research.

The new hothouse planet would become increasingly steamy, and then start to lose its oceans to interplanetary space. Over time, it would become completely dry, stay at a temperature at least 60°C hotter than it is now, and remain completely uninhabitable, even if greenhouse gas levels could be reduced.

Max Popp, postdoctoral researcher in climate instabilities at the Max Planck Institute for Meteorology, Germany, has been playing with models of clouds, sunlight, carbon dioxide and oceans for a while now.

Such research could not only help with a deeper understanding of global warming and climate change as a consequence of the human combustion of fossil fuels, but also with the possible dynamics of other planets, orbiting distant stars.

Baked to a crisp

He and colleagues report in Nature Communications that there may be no need to wait five billion years until the Sun becomes a Red Giant and bakes the inner planets to a set of crisps.

Notionally, humans could achieve much the same effect by simply quadrupling the proportions of carbon dioxide in the atmosphere to around 1,520 parts per million, and possibly as little as 1,120 ppm.

Right now, the ratio of CO2 has risen from 280 ppm to 400 ppm, and planetary average temperatures have risen by 1°C. So there is still a long way to go.

But, until now, researchers have wondered whether carbon dioxide alone could ever raise temperatures high enough to boil a planet dry. The Popp study suggests that it could − and in much lower proportions than others have suggested

Venus, covered in clouds of sulphuric acid and with a surface hot enough to melt lead, has been proposed as a victim of the runaway greenhouse effect.

Research such as this is a bit like a computer game: compose an ideal planet, much like Earth, and run it through a series of extreme tests.

Dr Popp and his team simplified their Earth-like planet as much as they could. They started with a world covered entirely by ocean, and then eliminated the ice caps.

They made it 6°C on average warmer than it is now – and climate models predict that a 6°C planetary average temperature rise is possible under a business-as-usual emissions scenario – and then let the greenhouse gases start to build up.

Other researchers have hypothesised that clouds would also build up, and reflect sunlight away from Earth, to contain the warming.

But this team found a different effect: water vapour would increase in the atmosphere, which would in any case expand. As the water vapour climbed ever higher, it would become increasingly vulnerable to radiation.

This would break up H2O into hydrogen and oxygen. Hydrogen, being the lightest of the elements, would start to ooze away into space. And without hydrogen, there is no water.

By the time that started to happen, this laboratory aqua-planet would be in a moist greenhouse state. Sea surface temperatures would be at least 50 to 70°C higher than now – that is, at the temperature needed to pasteurise milk – and life would become increasingly impossible.

Ominously, even if somehow the CO2 levels could be lowered dramatically, the planet would stay in this steam bath condition, increasingly parched. And the clouds above would simply trap the heat and make things worse.

“A planet in this state would eventually become uninhabitable as all water is lost to space,” the authors say.

They add: “To conclude, we have demonstrated with a state-of-the-art climate model that a water-rich planet might lose its habitability as readily by CO2 forcing as by increased solar forcing through a transition to a Moist Greenhouse and the implied long-term loss of hydrogen.” – Climate News Network

Canada and China to Cooperate on Clean Technology Development