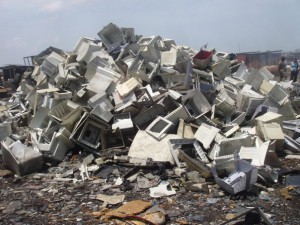 The project found that in Europe just 35% (3.3 million tonnes of 9.5 million tonnes) of used (but still functioning) and waste electronics and electrical equipment discarded by companies and consumers in 2012 wound up in official collection and recycling systems.

The other discarded electronics – 6.2 million tonnes in all – was either exported, recycled under non-compliant conditions or simply thrown in waste bins.

The study estimates 1.3 million tonnes of discarded electronics departed the EU in undocumented mixed exports, of which an estimated 30% (about 400,000 tonnes) was electronic waste; and 70% functioning equipment.

More than 10 times the 400,000 tonnes of e-waste exported – some 4.7 million tonnes – was wrongfully mismanaged or illegally traded within Europe itself. And, the research found, even in the few EU member states with robust, effective reporting systems, monitoring of de-pollution efforts and up-to-standard treatment conditions are not always securely in place.

The widespread theft of valuable components such as circuit boards and precious metals from waste electronics results in a serious loss of materials and resources for compliant waste processors in Europe. This annual estimated loss is valued at between €800 million and €1.7 billion (US $877 million to $1.86 billion).

Avoided costs of compliance with EU regulations (mainly de-pollution), is estimated at €150 million to €600 million (US $165 million to $658 million) annually.

According to Pascal Leroy, Secretary-General of the WEEE Forum: “Electronic and electrical equipment represents the fastest-growing flow of the world’s waste streams. The weight of Europe’s mismanaged e-waste alone equals that of a 10 meter high brick wall stretching from Oslo to the toe of Italy. Valuable metals and components, including critical raw materials, need to be safely captured and recycled to the fullest possible extent.” 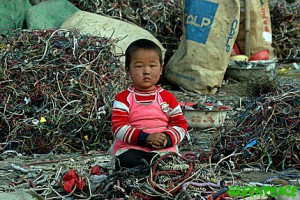 National surveys by INTERPOL show that on average each year only 2,000 tonnes (0.5%) of EU e-waste exports were reported as having been stopped in operations leading to some form of sentencing, administrative fines or civil penalties.

The report notes that 30% of EU members have not implemented the stringent regulations required by the latest version of the WEEE directive and that typical national penalties for infractions at the national level are not high enough to have deterrent value.

The report calls for better guidelines and formal definitions to help authorities distinguish used, non-waste electronics and electrical equipment from e-waste (equipment coming out of use or in post-use storage destined for collection or disposal).

The experts also suggest harmonizing penalties to simplify enforcement in trans-border cases, and to prevent criminals from shifting activities to lower-risk countries within the EU. As matters stand, prison and financial penalties for illegal e-waste trade vary greatly.

In addition to mismanagement, the CWIT project revealed cases of fraud, tax evasion and money laundering, demonstrating the availability of financial crime charges in dealing with offences.

Organized crime is involved in illegal waste supply chains in some countries, the researchers concluded, but suspicions of its heavy involvement are not corroborated by current information. “Increased intelligence collection and exchange will lead to a more comprehensive understanding”of this aspect of the issue, researchers say, adding that the actors observed in e-waste crime are mostly individual traders and companies, cooperating in loosely organized networks, committing ad-hoc offences. 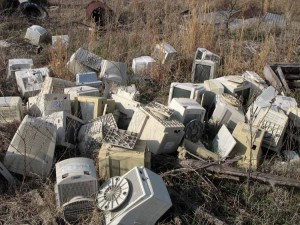 According to David Higgins, Head of Environmental Security Sub-Directorate of INTERPOL and the project coordinator: “As a profitable activity, with low risk of detection, this form of illicit trade is vulnerable to exploitation, which governments should prevent by employing a balanced mix of administrative and criminal penalties reflecting the value of illicit profits, as well as the large environmental and social harm involved. The law enforcement community needs to be more pro-active with illicit e-waste investigations, complemented by strengthened prosecution and sentencing.”

The CWIT project recommendation a multi-stakeholder approach and offers a short-, medium- and long-term implementation roadmap to reduce illegal trade.

Specifics include two new systems to foster inter-agency and international cooperation, as well as the exchange, storage and analysis of information:

The report also recommends dedicated training of judges and prosecutors. Many of the CWIT partners will continue their work in a EU funded project called DOT.COM Waste, expanding the gathered experience for training law enforcement authorities and prosecutors covering all waste types.

Jaco Huisman of United Nations University, Scientific Coordinator of the CWIT project, concludes: “Making policies and implementing them successfully is a difficult process, in particular when statistics and market understanding are missing.

The unique value of the project is the simultaneous provision of both facts and market analysis, as well as detailed scrutiny of the legal framework and the law enforcement chain. The dedicated roadmap developed for improving collection and treatment of e-waste in Europe will be a valuable result for all parties involved. While the work relates to Europe, it should also be of interest elsewhere.

The US, for example, has not ratified the Basel convention, and its e-waste is subject to far less oversight than it is in Europe.”

Seeing the forest and the trees, all 3 trillion of them