TORONTO, NOVEMBER 16, 2015– Corporate Knights, together with 350.org and South Pole Group, has launched the Clean Capitalist Decarbonizer, an interactive tool that allows users to determine the financial impact of divesting from carbon heavy companies.

Using this first-of-its kind tool, Corporate Knights analysed the investments of 14 funds totaling $1 trillion in assets, including the Gates Foundation and ABP, and determined that the scale of losses over the past three years exceeded US$22 billion.

The analysis covered recent disclosed holdings of 14 prominent funds1 to estimate the potential financial impact had they shifted their investments from the most carbon heavy coal and oil companies2 and coal-intensive utilities3 to companies that derive at least 20% of their revenues from environmental markets or new energy4.

From there, the total returns over a three year period starting on October 1, 2012 were calculated. This coincides with the first full quarter following 350.org founder Bill McKibben’s article in Rolling Stone, which launched the fossil fuel divestment movement.

“The analysis of 14 major funds, based on available data, found that carbon-intensive investments cost investors $22 billion in reduced returns. While incomplete disclosure limits the precision of analysis, the conclusion is unequivocal: decarbonizing portfolio holdings produced a better financial outcome in every case but one,” said Corporate Knights chief executive, Toby Heaps.

“It helps explain why a growing group of investors are voting with their dollars for less pollution and more environmental solutions.”

Some funds were found to have substantially higher exposure to carbon heavy companies, while others have quietly reduced, or in some cases completely eliminated, their major holdings exposure to the most carbon-intensive companies and as a result avoided significant financial losses.

And another by Arabella Advisors, which found that the movement to divest from fossil fuels and invest in renewable energy and climate solutions grew 50-fold in only one year, topping $2.6 trillion in assets under management by institutions and individuals committed to divestment.

“Major funds have consistently outperformed major indices in the last three years, through decarbonizing their portfolios. Our wide coverage with over 40,000 considered companies and our methodology with over 800 approximation models guarantees the accuracy and pertinence of the Clean Capitalist Decarbonizer. We are excited to be part of this initiative,” says Maximilian Horster, Director Financial Services at South Pole Group.

The period of analysis coincides with a tough market for oil and commodity prices, and it is possible that over the next few years, some oil stocks and even coal utilities could partially recover; however, when considering the long-term, it is clear that there is a tenuous business case for remaining heavily invested in carbon intensive industries, as outlined by the Governor of the Bank of England Mark Carney.

In failing to divest, institutions risk under-exposure to $3 trillion of public equities positioned to benefit from a more resource efficient and expanding low carbon economy.

“The impact of climate change will be a major investment theme in the next decade and investors who are at the forefront of addressing risks, such as stranded assets in their portfolio construction and security selection process, should be the beneficiaries of stronger long-term risk adjusted performance,” said Christopher Ito, Chief Executive Officer of Fossil Free Indexes.

“We are pleased that the Carbon Underground 200TM has become a standard tool for investors as they evaluate their exposure to reserve owning companies. Historical results such as those indicated by the Clean Capitalist Decarbonizer begin to help shape the narrative, but going forward, the impact of climate change and future carbon pricing will likely have a more pronounced impact especially on those reserve owning companies whose business models and strategies are not consistent with the move toward a low carbon economy.”

While this analysis focused on the past three years, dating to the launch of the fossil fuel divestment movement, other analyses over a ten year period by MSCI and Fossil Free Indexes also found fossil free portfolios outperformed.

“The Decarbonizer will provide a deeper level of transparency in the discourse around the investments of some of the world’s most prominent institutions,” said Brett Fleishman, Senior Analyst at 350.org.

“The success of the divestment campaign is evidence that the tide is beginning to turn against fossil fuels. When the tool disclosed that the University of Toronto could have generated an excess return — big enough to have paid full tuition for the entire student body for all four years — if they had divested from fossil fuels when the campaign started, the conversation became grounded in the story of the institution itself. Divestment is the moral, prudent, and smart thing to do.” 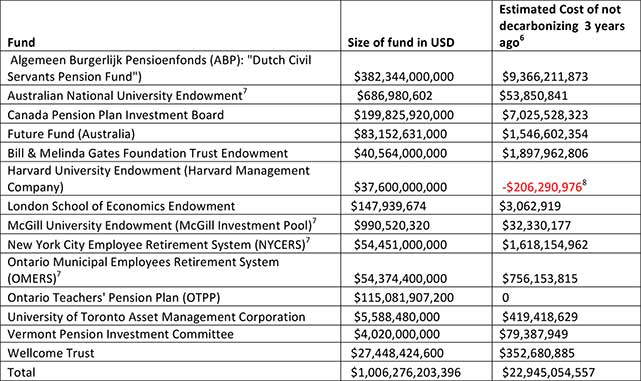