Vancouver, B.C.,  Dec. 22, 2016 – If countries abide by the Paris Agreement global warming target of 1.5 degrees Celsius, potential fish catches could increase by six million metric tons per year, according to a new study published in Science.

The researchers also found that some oceans are more sensitive to changes in temperature and will have substantially larger gains from achieving the Paris Agreement.

“The benefits for vulnerable tropical areas is a strong reason why 1.5 C is an important target to meet,” said lead author William Cheung, director of science at the Nippon Foundation-UBC Nereus Program and associate professor at UBC’s Institute for the Oceans and Fisheries.

“Countries in these sensitive regions are highly dependent on fisheries for food and livelihood, but all countries will be impacted as the seafood supply chain is now highly globalized. Everyone would benefit from meeting the Paris Agreement.”

“Changes in ocean conditions that affect fish stocks, such as temperature and oxygen concentration, are strongly related to atmospheric warming and carbon emissions,” said author Thomas Frölicher, principal investigator at the Nippon Foundation-UBC Nereus Program and senior scientist at ETH Zürich. “For every metric ton of carbon dioxide emitted into the atmosphere, the maximum catch potential decreases by a significant amount.”

Climate change is expected to force fish to migrate towards cooler waters. The amount and species of fish caught in different parts of the world will impact local fishers and make fisheries management more difficult.

The findings suggest that the Indo-Pacific area would see a 40 per cent increase in fisheries catches at 1.5 C warming versus 3.5 C. Meanwhile the Arctic region would have a greater influx of fish under the 3.5 C scenario but would also lose more sea ice and face pressure to expand fisheries.

The authors hope these results will provide further incentives for countries and the private sector to substantially increase their commitments and actions to reduce greenhouse gas emissions.

The study “Large benefits to marine fisheries of meeting the 1.5 °C global warming target” was published in Science: http://science.sciencemag.org/cgi/doi/10.1126/science.aag2331. 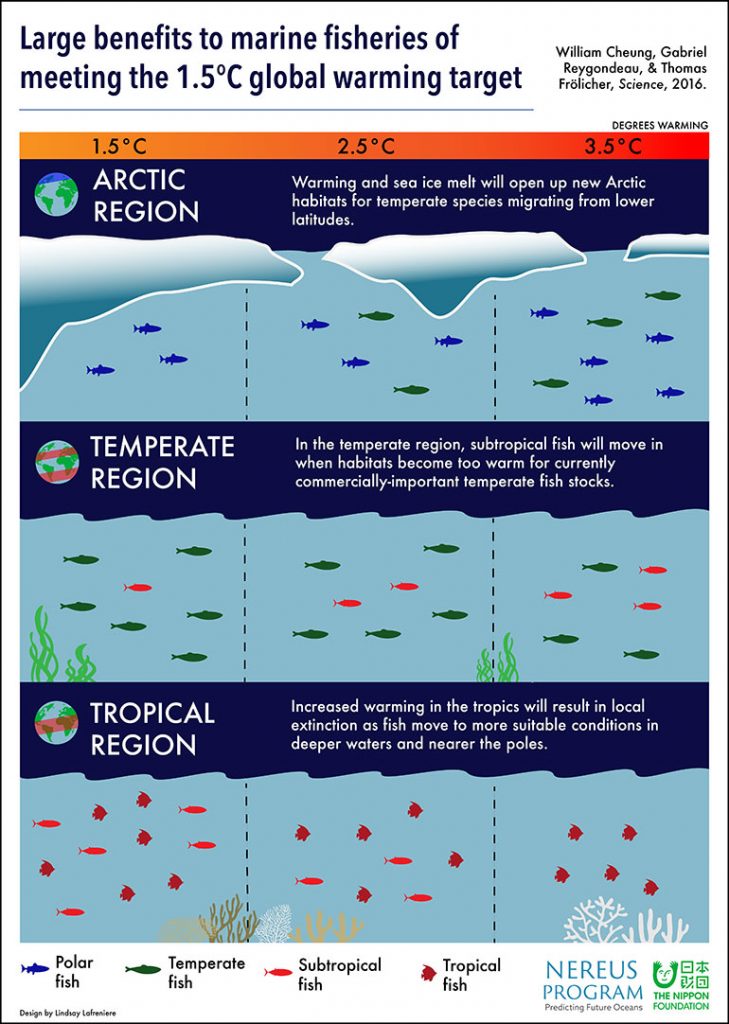