September 20, 2017  – OECD  The world economy has picked up momentum, as expanding investment, employment and trade support synchronized growth across most countries, according to the OECD’s latest Interim Economic Outlook.

The pace of expansion is projected to be faster this year than in 2016, with a further uptick expected in 2018, but strong, sustainable, and inclusive medium-term growth is not yet secured.

The Outlook points out that the recovery of business investment and trade remain too low to sustain healthy productivity growth, while wage growth has been disappointing on average, and not equitable across workers. Emerging markets are key for overall global growth –  strong future growth depends on deeper reforms. 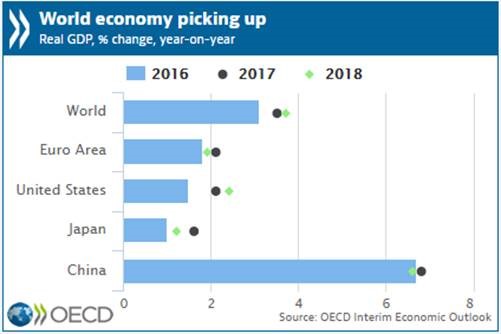 “The short-term outlook is more broad-based and the upturn is promising, but there is no room for complacency,” said OECD Chief Economist Catherine L. Mann. “Monetary policy should remain accommodative in some economies but with an eye on financial stability so as to remain supportive of further rebalancing towards fiscal and structural initiatives. Structural efforts need to be intensified to bolster the nascent investment recovery, to address slow productivity growth and to ensure the recovery yields benefits for all.”

“As fiscal policy has eased in many economies, it is crucial that the fiscal room be used to deliver on growth-enhancing and equity-friendly fiscal measures.”

The OECD projects that the global economy will grow by 3.5 percent this year and 3.7 percent in 2018, with industrial production and trade picking up and further acceleration in the rebound of technology spending.

The projections reflect modest improvements in the global economy since the previous Economic Outlook in June 2017.

Growth among the major advanced economies remains on pace. In the United States, growth is estimated at 2.1 percent in 2017 and 2.4 percent in 2018, supported by stronger consumer spending and business investment. Job creation has remained strong, but the extent to which fiscal easing and regulatory reform may provide an additional boost in 2018 remains uncertain.

The euro area is projected to grow at a 2.1 percent rate in 2017 and a 1.9 percent pace in 2018 – upward revisions from previous projections driven by stronger growth in key European countries.

Germany is forecast to grow by 2.2 percent in 2017 and 2.1 percent in 2018, France by 1.7 percent in 2017 and 1.6 percent 2018, while Italy will see a 1.4 percent growth rate this year and a 1.2 percent rate in 2018. The revised projections reflect stronger-than-expected performance in the first half of 2017, in the context of rising employment rates, accommodative monetary policy and reduced political uncertainty. The upswing is also driven by stronger consumption growth and investment, as well as healthy export growth.

In the United Kingdom, the previously identified growth slowdown is expected to continue through 2018, while uncertainty remains over the outcome of negotiations around the decision to leave the European Union. The unemployment rate has fallen to below 4.5%, but weak productivity and real wage growth persist. The depreciation of sterling has modestly improved export prospects but also pushed up inflation. In this environment, the UK is projected to grow by 1.6 percent in 2017 and 1 percent in 2018.

Growth in Japan increased in the first half of the year, supported by an upturn in public investment and stronger growth in Asian markets, and is projected at 1.6 percent for 2017, slightly above the June 2017 Economic Outlook. Rising corporate profits should help strengthen business investment through 2018, but low wage growth and fiscal consolidation are likely to weigh on activity in 2018, when growth is expected at 1.2 percent.

Growth in the major emerging market economies has improved overall, helped by a rebound in some commodity producers and public infrastructure investment in China, although growth remains subdued in a number of oil-exporting economies. Growth in China is revised upward, to 6.8 percent in 2017 and a more moderate 6.6 percent in 2018, as stimulus measures ease and efforts continue to stabilise corporate debt and rebalance the economy.

In India, the transitory effects of demonetization and of the implementation of the Goods and Services Tax (GST) have led to a downward revision in growth projections, to 6.7 percent in 2017 and 7.2 percent in 2018. In the longer run, the GST is expected to boost investment, productivity and growth.

Russia is rebounding from a recession with higher oil prices and lower interest rates providing a near-term boost to growth, which is projected at around 2 percent in 2017 and 2018. In Brazil, monetary easing is helping the gradual recovery and the strong decline in inflation is supporting consumer confidence. Growth is projected at 0.6 percent in 2017 and 1.6 percent in 2018, but medium-term growth prospects hinge on delivering reforms – including pension reforms – to ensure fiscal sustainability and enhance productivity growth.

The Interim Economic Outlook renews calls on policymakers to enact a rebalancing from monetary to fiscal and structural support for growth and wages. It calls for better use of tax and spending policies to achieve more inclusive growth and says increased structural reform efforts will be needed across all countries to boost productivity, wages and skills.

Retrofitting Canada – Could it work?