GLOBE-Net, September 29, 2015 – One of Alberta’s biggest solar projects has been built in one of the most unlikely places—the heart of Canada’s Peace River oil sands.

The inspiring 80-panel solar project was developed in a bid to create more green jobs and reduce reliance on fossil fuels.

Little Buffalo is a Cree community that has been heavily impacted by oil, gas and oil sands development. In 2011 it was the site of one of the largest oil spills in Alberta’s history.

The solar installation comes at a very critical time in Alberta as the provincial government has just started its climate consultations, including a possible new approach to renewable energy.

“After dealing with three decades of intensive oil, gas, logging, fracking and tar sands exploitation in our homeland, my community of Little Buffalo decided to forge a new future and become powered by the sun,” said Melina Laboucan-Massimo, Lubicon Cree First Nation and Greenpeace member. 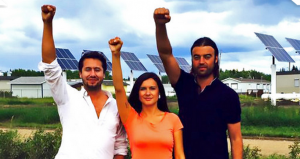 “First Nation communities have been on the front lines of resource extraction for far too long and we have paid the price for humanity’s addiction to oil, but we have hope for a way out of the crisis we are currently facing in Alberta and around the world,” she adds.

The community-owned project was created without government funding. Help in raising the financing needed came from Laboucan-Massimo’s partner’s company W Dusk Energy, a BullFrog Power grant, and donations from actress Jane Fonda and the Honor the Earth Foundation.

The solar panel installation was done mostly by community members, who have never installed a solar project before. It is now hoped they can use these new skills to install more solar around Alberta.

“These types of renewable energy project shouldn’t rest on the shoulders of communities to implement alone,” said Laboucan-Massimo. “They should be supported by both the Alberta and Canadian governments as we have seen with immense subsidies that have supported the fossil fuel industry for decades.”

In such an energy rich province a 20.8 kW solar installation mays seem rather insignificant compared to the massive energy developments only a few kilometers away.

But its significance goes much deeper, rooted in the fabric of the Cree culture and serves as sign of breaking away from decades of dependency and despair. It is a sign of change.

“A just transition needs to happen not only in communities that can afford renewable technology but it must happen and begin in communities facing the brunt of the environmental, social, and health implications from the extractive industry and climate change,” said Laboucan-Massimo.

“Albertans want to see change, and solar is huge part of making that change happen but we need to demand this change.”

More information on this project is available here

Watch this inspiring video on the Piitapan Solar Project

New Leadership at the Canadian Resources and Development Institute