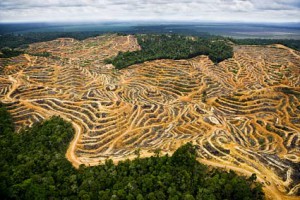 LONDON, 4 January, 2017 – The divestment movement, which has persuaded many companies, institutions and individuals to sell their shares in fossil fuel companies, has had a major success in another business that drives climate change – the palm oil industry.

A report released last year by Friends of the Earth US named companies with heavy investments that make billions of dollars in profits by clear-felling forests for palm oil plantations.

This put pressure on fund managers who claimed that their investments were sustainable, and one of them, Dimensional, has divested two of its portfolios of all palm oil plantation companies.

Texas-based with offices in eight countries, and managing investments of $445bn, Dimensional is in the big league of fund managers. So getting current palm oil production practices labelled unsustainable is a major boost for the divestment movement.

According to Bloomberg, the financial reporting agency, Dimensional has been trying to improve the credentials of funds they have called sustainable, and this has meant divesting from industries that contribute to climate change.

“By accelerating the divestment movement,
not only can we measurably improve climate
outcomes, but we can also reduce risk and
improve financial outcomes for everyday investors”

Bloomberg also point out that stocks in palm oil plantations have consistently performed worse than other shares, making divestment sensible for financial reasons too.

However, for Friends of the Earth US this is an important start. “We are extremely pleased that Dimensional has taken this step towards deforestation-free investing by ridding a few of its portfolios of problematic palm oil companies,” says Jeff Conant, senior international forest campaigner with the group.

“There’s a lot more to be done by Dimensional and every other US investment firm – but this signals an important first step in moving away from funding destructive palm oil practices.”

Companies whose shares have been sold have featured in recent reports of serious environmental and social abuses, including child labour and habitat destruction.

However, Dimensional has yet to go the whole distance and still has 27 mutual funds with more than $700m in assets invested across more than 44 palm oil plantation companies.

FoE were working with Macroclimate, an investment service dedicated to achieving maximum returns while avoiding financial exposure to climate change. Both organisations say they will continue to lean on Dimensional and other fund managers to get rid of suspect palm oil stock.

“If investors on a global scale divert their capital from companies causing deforestation to those with more climate-resilient alternatives, the risks of abrupt and irreversible climate change will be materially reduced,” says Mark R Kriss, managing partner of Macroclimate.

“By accelerating the divestment and deforestation-free investment movements, not only can we measurably improve climate outcomes, but we can also reduce risk and improve financial outcomes for everyday investors.”

There can be no doubt that the palm oil industry is an important driver of global warming, and Asian countries, particularly Indonesia, have been named as among the worst offenders. Scientific research published in September clearly showed the damage that palm oil plantations cause.

Despite the fact that the EU has attempted to label goods containing palm oil that does not come from sustainable sources, it is an uphill struggle, because almost half of all supermarket products contain the oil. – Climate News Network