A newly released report has found the waste sector has a key role to play in the development of a low carbon economy and the reduction of greenhouse gases (GHGs). This report comes in advance of the UN Climate Conference in Paris, which will take place in December.

The report was commissioned by Zero Waste Europe, in partnership with Zero Waste France and ACR+. The report finds that the role of waste prevention and improved waste management can play in reducing GHG emissions and the development of a low carbon economy has previously been significantly understated, partly due to the structure of the national inventories of the UNFCCC.

The report further provides an accurate examination of the true impact of waste management on climate change and carbon emissions. It confirms that actions at the top of the waste hierarchy – including waste prevention initiatives, reuse and recycling – have considerable scope to reduce climate change emissions.

As the report states “A climate friendly strategy, as regards materials and waste, will be one in which materials are continually cycling through the economy, and where the leakage of materials into residual waste treatments is minimised”. 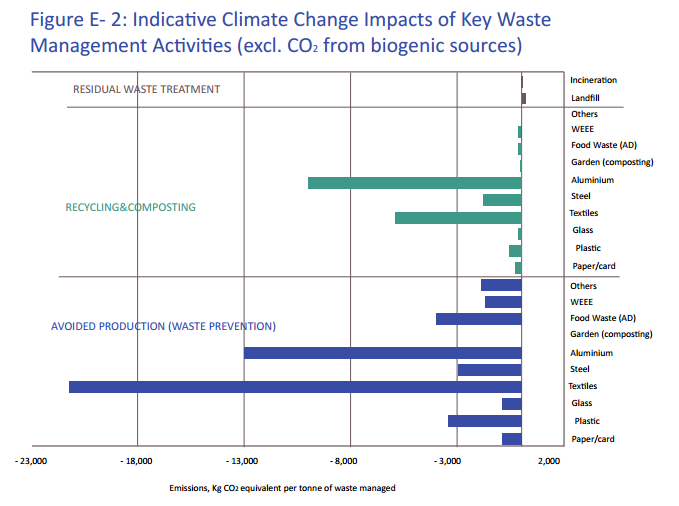 Mariel Vilella, Zero Waste Europe’s Associate Director said “For far too long the climate impact of waste management has been overlooked. Now it’s clear that waste prevention, reuse and recycling are climate change solutions that need to be fully integrated into a low carbon economy.”

In the report 11 key recommendations are made, calling for waste policies to be redesigned in order to prioritise the higher level options of the ‘Waste Hierarchy’ (waste prevention, reuse and recycling) and immediately reallocate climate finance subsidies which are currently supporting energy generation from waste.

Recommendation 1: Waste policies should be designed to manage waste in the upper tiers of the waste hierarchy (i.e. recycling or above) Generally, waste policies that move waste increasingly into the upper tiers of the waste hierarchy are likely to be beneficial for climate change. Simply switching from landfill to incineration is likely to limit climate change benefits, and even a worsening of emissions where energy sources are becoming decarbonised. Every effortsshould be put on waste prevention, reuse, and recycling, as they can play a significant mitigation role.

Recommendation 2: Indicators of waste management performance should shift from ‘how much is landfilled?’ to ‘how much residual waste is generated?’ One of the key indicators that has been used by DG Environment, Eurostat and the EEA to assess waste management performance is the amount of waste landfilled, with lower figures being deemed indicative of superior performance. However, a low landfill rate does not imply a low production of waste and a high recycling rate. Furthermore, even if it was the case, the analysis developed in the report shows that landfills do not necessarily perform less well than all other options. This indicator can also trigger perverse effects, as countries will be tempted to invest in capital-intense residual treatments, often leading to incineration overcapacities.Shifting to a focus on residual waste would also help Member States focus their attention on moving waste into the upper tiers of the waste hierarchy.

Recommendation 3: The implementation of blanket bans on the landfilling of waste should be resisted, as they are generally not enforceable. The focus should be on measures to encourage, or mandate, the separation of waste for preparation for reuse or recycling. Total landfill bans may have counterproductive effects since they tend to develop incineration capacities which can turn rapidly into overcapacities or keep countries locked into low recycling rates. Rather than encouraging specific landfill bans for certain materials, source separation for preparation for reuse or recycling should be the priority, and would necessarily trigger a decrease of residual waste landfilled and incinerated.

Recommendation 4: Member States should immediately discontinue support for all forms of energy from residual waste, including implicit subsidies. Given that part of the rationale for developing renewable sources of energy is to address climate change, it seems counterproductive to maintain support for those which contribute to climate change. The case for supporting measures for the generation of energy from waste on the basis that waste is ‘a renewable resource’ makes no sense when set against the waste hierarchy. As countries improve in their prevention, reuse, and recycling, so less and less residual waste will be available. It is stretching the definition of ‘renewable’ beyond what is credible to argue that residual waste could be a source of ‘renewable’ energy.

Recommendation 5: Every subsidy for the utilisation, directly, of harvested biomass for renewable energy generation / renewable fuels should be withdrawn. In a world where there will be increasing pressure on land, it must surely be questionable to use biomass directly for energy when the land used to grow it could be used for food, or for manufacturing prior to the resulting waste materials being recycled. Only when waste materials are ‘leaking’ from the system, or when food waste is being digested, should they be used for energy generation, and no subsidies should be attributed to use of primary biomass for energy purposes.

Recommendation 6: Consideration needs to be given as to how to integrate ‘waste’ within the framework of European policies to tackle climate change. One way would be to consider its integration within the EU-ETS. Another would be to consider reinforcing the Effort Sharing Decision, making GHG emission reduction targets with appropriate ambition for the waste sector. Particular attention would need to be paid to ensuring the benefits of recycling and reuse were adequately recognised, even where the recycling and reuse took place in other countries. [6]

Recommendation 7: In the short-term, and in the absence of a move to consumption-based inventories to the UNFCCC, it would be helpful to include: o as an addendum to the ‘waste’ section of the inventory, the estimated GHG effects of recycling (including where materials collected for recycling are exported), and o in the Industry chapter, the extent to which industries make use of recycled materials (and the implied level of emissions saving).

Recommendation 8: Recognising the uncertainty associated with the way in which emissions from the AFOLU (agriculture, forestry and other land use) Sector are accounted for, inventories should include emissions of biogenic CO2 from incineration (and biomass power plants) until such time as the accounting methods have across countries been assessed in terms of the adequacy of the treatment of this matter.

Recommendation 9: All life cycle studies engaged in comparative assessments of waste treatments should incorporate CO2 emissions from non-fossil sources in their comparative assessment. The argument that CO2 from biogenic sources is all ‘short-cycle’, and so, can be ignored, is tantamount to assuming a separation in the pools of carbon dioxide from fossil and non-fossil sources. It is as though the argument runs that the climate only changes if emissions of CO2 come from fossil sources. This is so obviously wrong that it seems genuinely surprising that this argument could ever have been considered acceptable: in a comparative assessment of the contribution of waste management alternatives to climate change, the only correct way to proceed is to account for emissions (and sinks, if this is applicable) of all greenhouse gases since they will all have ‘warming potential’, irrespective of their origin.

Recommendation 10: In the longer term, it would be preferable to move towards consumption based inventories. Inventories based on production completely underestimate the global impact of a country’s consumption, as many emissions occur abroad, where the goods are produced. In this respect, consumption based inventories would be much more effective at reflecting the GHG impact of EU countries and taking responsibility for all the emissions they are generating. The emissionsfor the EU-27 from 2009 using the production based approach have been assessed to be 4,059 million tonnes CO2 equivalent, whilst the equivalent figure using their consumption-based approach was 4,823 million tonnes CO2 equivalent. Despite the uncertainties of this method which would require countries to put efforts in data collection, it would be a good way to force them to collaborate to mitigate their emissions, as emissions reduction in one country could trigger a rise in another one if the consumption and production systems are not made sustainable.

Recommendation 11: Regional funds (and funding from international financial institutions) urgently need to reconsider their funding of waste management projects. The more capital intense waste management optionslie closer to the bottom of the waste management hierarchy than the top. The tendency for those engaged in funding organisations, on the other hand, is to see disbursement of capital as a key indicator of success. In such a situation, large amounts of capital can create as many problems as it solves. Whilst it is one thing for private capital to back specific projects, those disbursing regional funds, and the international financial institutions, need to develop innovative models of funding that facilitate projects for prevention, reuse, repair, remanufacturing, and recycling rather than residual waste treatments. The lack of innovation in this regard is extremely disappointing, not least given the limited climate change benefits that are achieved through such projects (notwithstanding the claims made for them).

These recommendations put a strong focus on correcting methodological issues that are currently preventing Member states and the European union from implementing waste policies that are efficient in terms of GHG emissions.

“Efficiency and smart waste management is key for a low carbon economy. Still, it is only the tip of the iceberg as a much bigger impact can be achieved through resource efficiency and adopting a life-cycle perspective”. Françoise Bonnet, Secretary general of ACR

The report shows that in the decarbonizing economy required to mitigate the worst impacts of climate change, technologies such as incineration will become less attractive options and ultimately present an obstacle to a low carbon economy.