Oceans are heating up at the double

LONDON, 6 February, 2016 – Ocean temperatures first collected during one of the great 19th-century voyages of exploration confirm one of the consequences of climate change: humans have managed to warm even the deepest parts of the ocean.

A new study in Nature Climate Change calculates that the amount of heat absorbed by the ocean has doubled in the last 18 years. A third of this heat has collected in the depths at least 700 metres below the waves − and the same region is rapidly getting hotter.

Peter Gleckler, a research scientists at the Lawrence Livermore Laboratory in California, and colleagues started with data collected by the world’s first modern oceanographers aboard the British survey ship HMS Challenger in 1872-76. 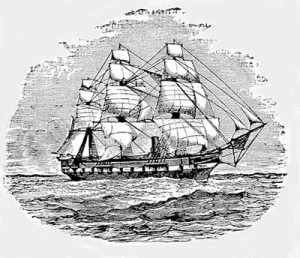 With such systematic findings, the American research team could begin to make estimates of how ocean temperatures have changed between 1865 and 2015.

They calculate that, since 1970, around 90% of the Earth’s uptake of heat associated with man-made global warming, as a consequence of greenhouse gas emissions from fossil fuel combustion, has been absorbed by the oceans.

In effect, they have used the evidence collected from the depths by 19th-century scientists aboard a three-masted, square-rigged wooden ship to settle a 21st-century puzzle: where has the heat from global warming actually gone?

The American researchers considered the ocean as a kind of three-layer cake, from surface to 700 metres, from 700 metres to 2,000 metres, and the deepest layer of all, below 2,000 metres.

They then used climate simulations, historical measurements and readings from autonomous floats to compare the changes in the ocean temperatures over the historical era.

And their conclusion seems to confirm an already existing answer to one vexed question: has there been a real slowdown in the rate of increase in global warming?

The answer seems once again to be no. The predicted temperature rises that are not being recorded in the thin layer of planetary atmosphere are instead being absorbed in the oceans that cover more than two-thirds of the globe.

But the latest study confirms a pattern of emerging evidence. So even though many climate scientists thought they already knew the answer, the study has been welcomed.

“The ocean takes up an enormous amount of heat, and an increase in the rate of uptake is one reason why the pace of global warming appeared to slow somewhat until last year,” says John Shepherd, professorial research fellow in Earth system science at the University of Southampton’s National Oceanography Centre, UK.

“But it’s a bit of a mixed blessing. Once the ocean heat uptake settles down again, the rate of warming is likely to return to what it was before.

“The extra heat will remain in the ocean, where it may affect both ocean and atmospheric circulation patterns, and so contribute to unusual weather patterns such as El Niño, or it may be released to contribute to more rapid or prolonged warming later on.

“It’s certainly not a cure for climate change, nor any reason to be less concerned about it.” – Climate News Network

Is it time to rethink recycling?