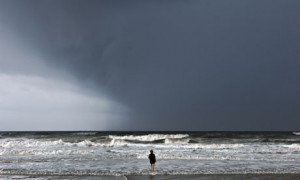 January 19, 2017 – New U.S. regional sea level scenarios developed by NOAA and its partners will give coastal communities better, more localized data to help them plan for and adapt to the risk of rising sea levels to their economies and infrastructure.

Sea level rise is occurring worldwide, but not at the same rate everywhere. Differences will also likely continue in the future, so decision-makers need local information to assess their community’s vulnerability.

“The ocean is not rising like water would in a bathtub”

“The ocean is not rising like water would in a bathtub,” said William Sweet, Ph.D., a NOAA oceanographer and lead author of the report detailing the scenarios.

The report helps communities track a range of scenarios that they may fall under for each of the timeframes, and assess their risk of experiencing impacts under the scenario.

The researchers scaled these scenarios down to a one-degree gridded resolution, or roughly 70 miles. This allows a coastal manager in Miami and one in Mobile, Alabama, using the same scenario to prepare for different outcomes.

A similar method is already being used in state planning in the mid-Atlantic and Gulf of Mexico and has been previously used to assess risk to worldwide U.S. military installations in an interagency report prepared for the Department of Defense in 2016offsite link.

A joint public- and private-sector group developed the report for the Sea Level Rise and Coastal Flood Hazard Scenarios and Tools Interagency Task Force, which was convened by the U.S. Global Change Research Program and National Ocean Council in 2015.