Reflections on the Passing of Maurice Strong 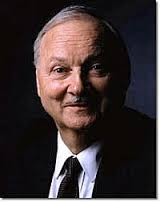 As world leaders gather in Paris this week to forge a binding international accord to reduce carbon emissions, they will be concluding a process initiated over 40 years ago by one of Canada’s most distinguished visionaries, Doctor Maurice Strong.

Unfortunately, Maurice will not be on hand to see the culmination of his vision. He passed away last week at the age of 86.

It is difficult to put a label on someone as accomplished as Maurice Strong. A successful businessman, a dedicated public servant, an internationally recognized diplomat, a champion of sustainable development, a visionary leader – he was all of these and more.

But to me, his most important role was as my friend and my mentor.

It was his insights and passion that inspired the creation of the GLOBE Foundation, putting in place Canada’s premier window on the business of the environment. Over the years he helped to shape the GLOBE message about the role of business in the pursuit of sustainable development, and spoke eloquently on this and other matters at many GLOBE events.

It was his legendary accomplishments in the larger national and international arenas that set in motion initiatives that have literally changed the world.

Growing up in the depression era of Manitoba, he rose through the ranks of various oil companies in Alberta eventually to become the President Power Corporation, one of Canada’s largest investment corporations. Never far from his mind was the importance of sustainable development and with the support of then Prime Minister Lester B. Pearson, he was instrumental in the founding of the Canadian International Development Agency in 1968.

In the early 1970s, as Secretary General of the United Nations Conference on the Human Environment, he commissioned a report on the state of the planet, Only One Earth: The Care and Maintenance of a Small Planet, which was the world’s first global “state of the environment” report.

That report and the momentum it created within the international development community, led to the establishment by the UN General Assembly in 1972 of the United Nations Environment Programme (UNEP), with headquarters in Nairobi, Kenya. As the first head of UNEP, he convened the first international expert group meeting on climate change.

He was instrumental in the achievement of a wide range of undertakings within the United Nations, but is best remembered for his role as the Secretary General of the first U.N. Conference on Environment and Development, more generally known as the Earth Summit, that took place in Rio de Janeiro in June, 1992. Arising from the Rio Summit, he became the driving force behind the Kyoto Protocol, the first global accord designed to limit greenhouse gas emissions.

He was an active player in the subsequent Earth Summits, but always found time to return to Canada to connect with his vast network of associates and friends, myself included, to further the cause of responsible sustainable development. It was during these encounters that I came to fully appreciate the intensity of his passion to address the rampant inequities of the global economic system that left so many millions trapped in vicious cycles of poverty.

In his opening address to the Rio Earth Summit he said “The rich must take the lead in bringing their development under control, reducing substantially their impacts on the environment, leaving environmental ‘space’ for developing countries to grow. The wasteful and destructive lifestyles of the rich cannot be maintained at the cost of the lives and livelihoods of the poor, and of nature.”

It was fire that burned deep within him, one that prompted some to label him as a ‘socialist’. He once lightheartedly described himself as a socialist in ideology, but a capitalist in methodology.

” This is not just a technical issue. Everybody’s actions are motivated by their inner life, their moral, spiritual and ethical values. Global agreements will be effective when they are rooted in the individual commitment of people, which arises from their own inner life.” Maurice Strong,

Prime Minister Justin Trudeau described Maurice Strong as a pioneer of sustainable development who left our country and our world a better place.

I fully agree. I feel privileged not only to have known Maurice, but also to have been counted among his friends.

If the meetings now underway in Paris culminate in a global accord to contain greenhouse gas emissions, it would be a fitting tribute to the man who personally shaped many of the institutions that are today the foundations of international environmental diplomacy.

It will also give voice to his enduring passion to improve the wellbeing of so many in the developing world by giving them the means to share more equitably in a more sustainable future.

I will miss Maurice Strong. But like so many others, I and my children’s children will enjoy a better world because of him.

The Human Cost of Climate Change

How the circular economy could end take-make-waste businesses