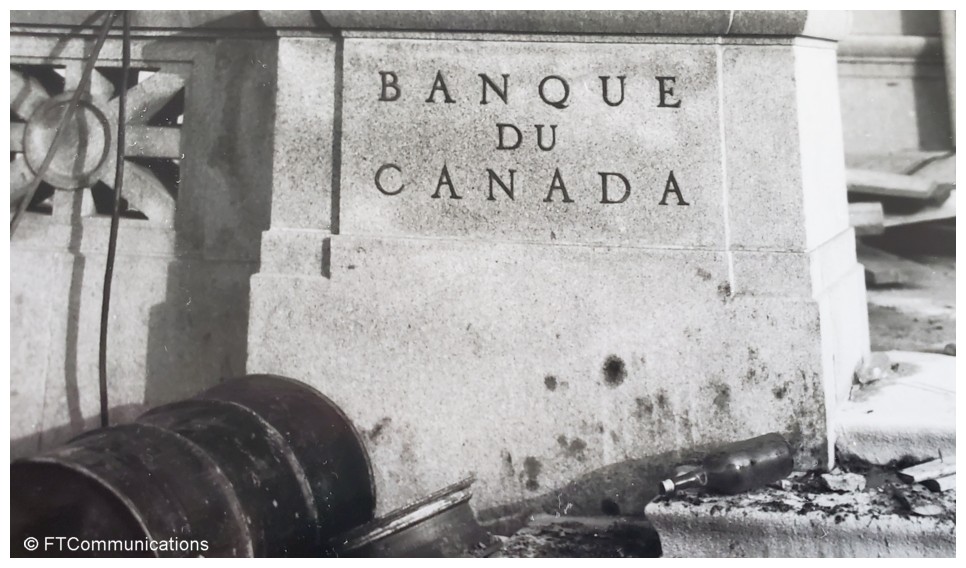 GLOBE-Net, July 13, 2020 – The COVID-19 pandemic has toppled Canada’s monetary and fiscal landscape and the Bank of Canada may not be able to prevent widespread bankruptcies, wild price swings or save the Canadian dollar.

To avoid economic collapse and an unprecedented decline in the nation’s GDP, the Bank increased financial liquidity by printing more money and holding interest rates at record lows 0.25%.

The federal government’s massive financial support pushed the deficit to $343.2 billion and the national debt to $1.06 trillion, both record highs. [i]

The pandemic sparked a new paradigm where supply chain disruptions for critical goods have resulted in inflated prices. Falling demand in other areas is dampening prices.  Global geopolitical events – notably involving China and the United States have also stalled the importation of cheaper goods.

At issue here is whether the Bank of Canada’s monetary tools are adequate to the challenges ahead. There are limits to how much money the bank can print and how much leverage it has to influence the nation’s financial system.

Simply put, is the Bank of Canada broke or broken?

In March 2020 many investors began converting assets to cash which in turn constrained available credit liquidity, the ease with which assets or securities can be converted to cash without affecting market prices. The Bank of Canada intervened “by buying short-term and long-term debt, and by purchasing provincial debt temporarily using term repurchase operations”.[ii]

These large-scale asset purchases grew the supply of money (and available credit) and gave governments, financial institutions, corporations, and other investors better access to credit.

The new money in the economy is reflected in the Bank’s balance sheet, which quadrupled from $120 billion in March to $470 billion in June 2020. See below. 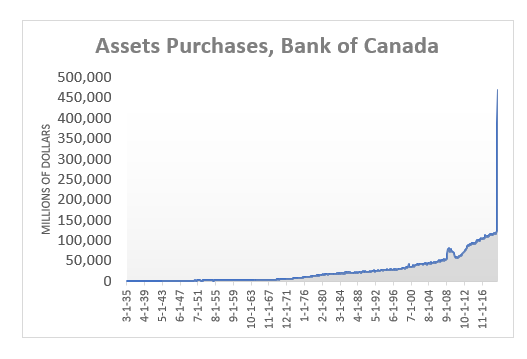 By the end of May 2020, the Bank’s acquisitions included 45% Repurchase Agreements (Repos), 29% Government of Canada Bonds and 24% Treasury Bills. The remaining 2% consists of Canada Mortgage Bonds and Advances to Members of Payments Canada.

A Repo is a financial contract that resembles a collateralized loan. It is used to support the funding needs of financial institutions and to procure specific securities on a temporary basis. The Canadian repo market is primarily composed of large banks and large investment institutions such as pension funds. [iii]

While the new money was urgently needed to ease credit availability the medium-term impacts on price stability, the international market for the Canadian dollar, direct foreign investment and sustainable asset values are far from certain.

The Bank is confident that inflationary pressures are manageable. In his last speech before leaving the Bank then-Governor  Stephen Poloz said: “although a minority of observers worry that these extreme policies (growing the money supply and almost zero interest rates) will create inflation someday, our dominant concern was with the downside risk and the possibility that deflation could emerge”. [iv] His focus then was to keep the economy on track.

In addition to price and currency instabilities risks, the availability of cheap money may create an asset bubble where financial institutions and corporations are motivated to purchase very high-risk assets. Evidence of this is already emerging in hyper-active stock market activity.

This may be already occurring. In the United States, the Federal Reserve increased its assets by 20% from April 1, 2020, to July 1, 2020. The Dow Jones index based on the Fed’s coattails grew by 14% in this period. From January 1 to the end of March 2020 the Dow has declined in value, while the Fed’s asset base was static.

The potential impact on equity markets in both Canada and the United States is of concern for both central banks when deciding on whether or not to divest its asset base.

Similarly, the excessively large government deficits are almost affordable when money is cheap and credit liquidity is high. The larger concern in keeping these credit costs near zero may constrain the central bank’s ability to manage inflation or to maintain the international value of the Canadian dollar if it becomes threatened.

If there is a run on the Canadian dollar tied to the deficit and massive debt, the central bank normally would raise interest rates to encourage an inflow of foreign capital and to buoy-up the dollar. The adverse impact this would have on governments’ debt servicing costs, however, may tie the central bank’s hands.

The Minister of Finance’s Fiscal Snapshot says the federal deficit of $342.2 billion is manageable.  This may be so, but the deficit figure represents 15.9 percent of GDP and brings the federal debt-to-GDP ratio to 49.1 percent. [vi]

This would be the largest recorded budgetary deficit well above the record of 8.0 percent of GDP observed in 1984-85.[vii] Significantly, the Finance Minister’s snapshot was a ‘best case’ scenario. It could get worse if pandemic-related closures persist.

Also, the fiscal pinch is not limited to the federal government.  All provinces and many large cities are also feeling the pain, and most have put their deficit-reduction plans on hold and are demanding greater direct federal financial support.

The larger deficit is due primarily to a $71.1-billion decline in tax revenues combined with $227.9 billion in direct spending and tax measures in response to COVID-19 and other consequential adjustments. The drop in federal revenues is the steepest since the Great Depression and is twice as large as the decline that occurred during the 2009-10 global financial crisis.

Faced with high levels of debt, extreme difficulties in implementing austerity programs and new taxation, Canada, like other developed governments, is facing a difficult balancing act where traditional fiscal and monetary measures will be much less effective in preventing economic chaos.

This balancing act will entail a mixture of policy tools including building excellence in debt issuance and management, unlocking the funding potential of balance sheets, optimizing revenue streams and containing expenditures. These are exceedingly difficult trade-offs.[ix]

What we are learning somewhat painfully is that the economic fallout from the COVID-19 crisis is unlike anything we have faced in recent years. Other downturns were triggered by events in the business cycle. Today, people are not working, and businesses are shut down to protect workers and consumers from the virus.

Monetary policy tools do not lend themselves well to such extraordinary circumstances. Fiscal tools are more effective in dealing with problems of supply constraints and forced unemployment.

The massive asset purchases by central banks from developed economies were essentially an experiment in employing an unconventional tool that governments believed were urgently needed to provide desperately needed credit to governments, institutions and corporations to keep the economy operating.

These asset purchases including provincial and corporate bonds are supporting the economic rebound by keeping interest rates low and ensuring there is adequate access to credit. The Bank of Canada will be under enormous pressure to keep this activity up.here are many moving parts to this economic recovery and serious risks are involved. Including:

The role of monetary policy and fiscal policy becomes blurred when purchasing large amounts of government debt at almost zero interest rates is financed by money creation by the central bank.[x]

The Bank of Canada is in a hard place now. If future inflation necessitates higher interest rates both the federal and provincial governments that are carrying massive levels of debt at minimal cost, would suffer from higher borrowing costs.  Any major increase in interest carrying costs may involve insolvency risks and credit downgrades for the respective governments.

The Bank generally operates independently of governments, but the current high fiscal debt makes this difficult. By its capacity to print money, theoretically, the Bank could never be broke. However, some of the tools available to it are broken, or at least ineffective in the face of what lies ahead.

It will be difficult for the federal government to use fiscal stimuli to recover from the pandemic and grow the economy beyond 2020 due to the high levels of debt and fiscal imbalances. This puts the sole pressure on the Bank of Canada to use its policy tools to facilitate the recovery. However, as stated, these policy tools, especially major purchases of government and corporate debt carry enormous longer-term risks and caution is needed.

Ken White is a semi-retired economist living in Port Coquitlam British Columbia. His recent work has been in modelling the economic impacts of the green economy in British Columbia and other provinces. Previously when working for the federal government in Ottawa, Ken worked extensively with its financial management system and the federal Main Estimates. Ken maintains a strong interest in fiscal and monetary policies and issues.