November 5, 2015 – Vancouver City Council approved a new Renewable City Strategy for Vancouver to shift to 100 per cent renewable energy by 2050 or sooner.

“Today over 30 per cent of the energy used in our city is renewable. With a pragmatic approach to buildings and transportation, we eliminate our reliance on fossil fuels and make Vancouver a cleaner, healthier, and more resilient city.”

Principles and actions of the strategy

The 100% Renewable Energy Strategy approved by Council is based on three key principles:

The City of Vancouver can be the catalyst for change through its own internal operations, by:

Other actions the City can take to move towards 100 per cent renewable energy are to:

Below are the modelled effects of implementing the Renewable City Strategy. The cumulative effect of the strategy is to reduce total energy use by one third over 2014 levels, saving 21 million GJ of energy a year, a reduction over business-as-usual energy demand of more than 50%, saving 39 million GJ of energy annually.

Improvements in building performance, reductions in personal vehicle use through active transport, and improvements in vehicle efficiency account for 45% of total city-wide energy system changes. 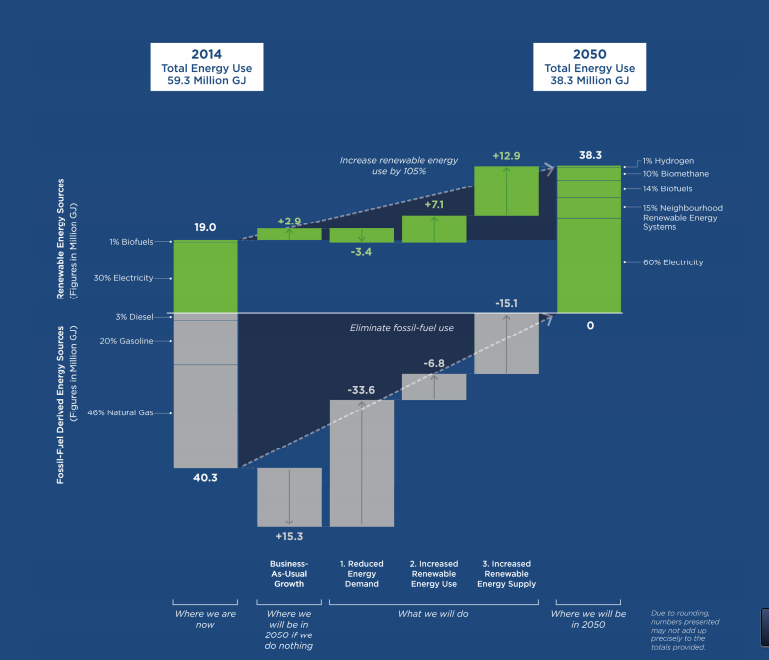