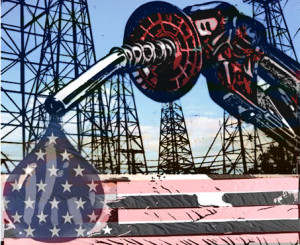 June 25, 2015 – Are greenhouse gas emissions from Canada’s oil sands higher than those from conventional oil?

Apparently yes, according to a new study funded in part by the U.S. Department of Energy. It says oil from Canada’s oil sands produce greenhouse-gas emissions that average 20% more than from oil from conventional U.S. crude.

The study argues that greenhouse gas regulations affecting U.S. transportation fuels require a holistic examination of the life-cycle emissions of petroleum feedstocks – in essence an analysis from point of origin to the point of consumption – from well-to-wheels (WTW).

The study was conducted jointly by the DOE’s Argonne National Laboratory, researchers at Stanford University and the Institute of Transport Studies at the University of California.

The analysis was based on detailed characterization of the energy intensities from oil sands projects, representing industrial practices and technological advances since 2008.

Four major oil sands production pathways were examined, including bitumen and synthetic crude oil (SCO) from both surface mining and in situ projects. 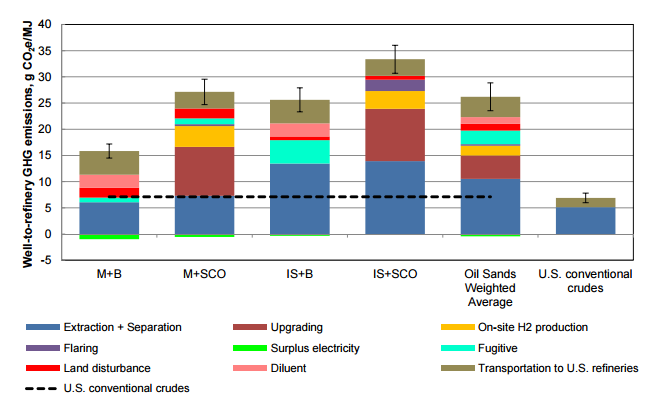 This range can be compared to 23 ~4.4 g CO2e/MJ for U.S. conventional crude oil recovery.

Depending on the extraction technology and product type output of oil sands projects, the WTW GHG emissions for gasoline and diesel produced from bitumen and SCO in U.S. refineries were in the range of 100–115 and 26 99–117 g CO2e/MJ, respectively, representing, on average, about 18% and 21% higher emissions than those derived from U.S. conventional crudes.

WTW GHG emissions of gasoline and diesel derived from diluted bitumen ranged from 97 to 103 and 96 to 104 g CO2e/MJ, respectively, showing the effect of diluent use on fuel emissions.

The magnitude of differences in emissions of different life-cycle stages varied significantly between the oil sands pathways and the U.S. conventional crudes pathway.

This difference was attributable to the dramatically more-energy-intensive oil sands extraction, separation, and upgrading processes relative to conventional crude recovery.

Using this approach that compares emissions from the oil sands and conventional crudes pathways within the same system boundaries, the study concludes that without significant reduction in the energy intensity of extraction, separation, and upgrading of oil sands, WTW emissions for gasoline and diesel production from this source will remain much higher than from U.S. conventional crudes – about 18% (for gasoline) and 21% (for diesel).

This could prove problematic for U.S. policy makers, notes the study, as higher well-to-wheel emissions for gasoline and diesel production in the U.S. could be expected when oil-sands products become a larger fraction of the U.S. fuel mix.

Notably the study did not include crude from shale oil production, which has become a major source of supply in the United States.

The full study is available here.