LONDON, 15 March, 2015 − A senior French political leader, foreign minister Laurent Fabius, has told an international conference on how to reduce the risk from natural disasters that 70% of them are now linked to climate change, twice as many as twenty years ago.

Mr. Fabius is the incoming president of this year’s round of negotiations by member states of the UN climate change convention, to take place in Paris in December. He said disaster risk reduction and the struggle against climate change went hand in hand: “It is necessary to tackle these problems together and not separately.”

He was speaking against the background of two events which occurred thousands of miles apart on 14 March, linked by nothing except tragic coincidence. 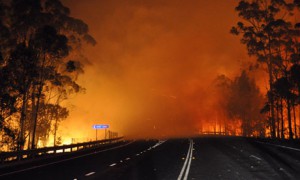 In the Japanese city of Sendai the third UN world conference on disaster risk reduction began a five-day meeting. In the South Pacific Cyclone Pam brought death and devastation to the 83-island nation of Vanuatu on a scale seldom recorded in the region.

Vivien Maidaborn, executive director of Unicef New Zealand, said the disaster could prove one of the worst in Pacific history. “The sheer force of the storm, combined with communities just not set up to withstand it, could have devastating results for thousands across the region,” she said.

A Unicef worker in Vanuatu described the cyclone as “15 to 30 minutes of absolute terror” for “everybody in this country” as it passed over.

The president of Vanuatu, Baldwin Lonsdale, told the UN meeting: “I am speaking with you today with a heart that is so heavy… All I can say is that our hope for prospering into the future has been shattered.”

The UN Secretary-General, Ban Ki-moon, opened the Sendai meeting, attended by 4,000 people from 186 countries, with a reminder that annual economic losses from natural disasters are now estimated to exceed US$ 300 billion annually.

He said: “We can watch that number grow as more people suffer. Or we can dramatically lower that figure and invest the savings in development. Six billion dollars allocated each year can result in savings of up to US$360 billion by 2030.” 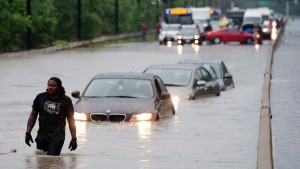 A report released at the meeting, United for Disaster Resilience, prepared by insurance companies working with the UN Environment Programme’s Finance Initiative, said: “In the past decade, average economic losses from disasters were about US$190 billion per year, while average insured losses were about US$60 billion per year. This century, more than one million people have already lost their lives to disasters.”

Mr Fabius said the creation of a worldwide early warning system for climate disasters could provide the most vulnerable countries, including small island developing states, with access to real-time weather and climate updates, information and communications technology, and with support for an SMS-based alert system. UNISDR’s PreventionWeb already links those working to protect communities against disaster risk.

Since the last such disaster risk conference in 2005, the UN says, at least 700,000 people have died, 1.7 billion more have been affected, and economic losses from major reported disasters total US$1.4 trillion.

The conference is working to prepare a new plan for reducing the risks of disasters. Margareta Wahlström, head of UNISDR, said: “After three years of consultation on a post-2015 framework which updates the current Hyogo Framework for Action, there is general agreement that we must move from managing disasters to managing disaster risk.” She said the framework would help to reduce existing levels of risk and avoid the creation of new ones. − Climate News Network

Lessons learned in the management of multilateral climate negotiations

Glass half full or half empty: Canadians confident in their tap water, but do they care?