A Bright Future for Solar Energy

New solar PV capacity grew by 50% last year, with China accounting for almost half of the global expansion, according to the International Energy Agency’s latest renewables market analysis and forecast. For the first time, solar PV additions rose faster than any other fuel, surpassing the net growth in coal.

Boosted by a strong solar PV market, renewables accounted for almost two-thirds of net new power capacity around the world last year, with almost 165 gigawatts (GW) coming online, according to the new report, Renewables 2017. Renewables will continue to have a strong growth in coming years. By 2022, renewable electricity capacity should increase by 43%. 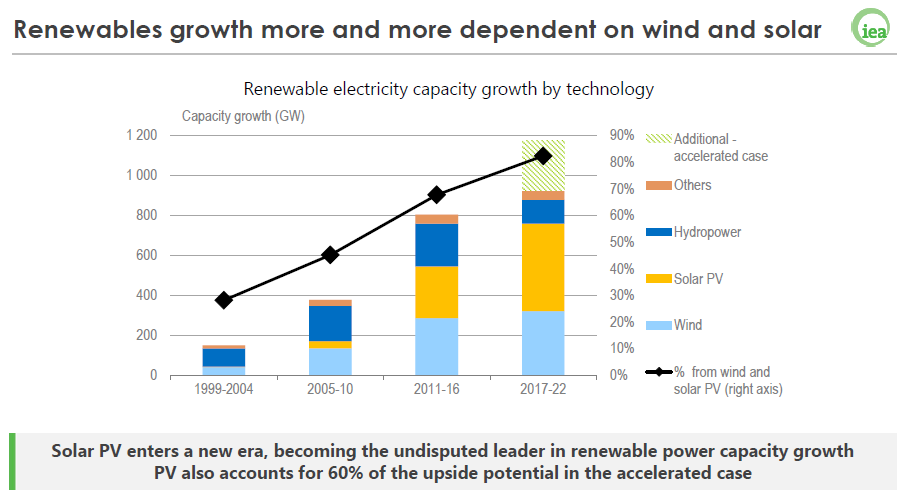 “We see renewables growing by about 1,000 GW by 2022, which equals about half of the current global capacity in coal power, which took 80 years to build,” said Dr Fatih Birol, the executive director of the IEA. “What we are witnessing is the birth of a new era in solar PV. We expect that solar PV capacity growth will be higher than any other renewable technology through 2022.”

This year’s renewable forecast is 12% higher than last year, thanks mostly to solar PV upward revisions in China and India. Three countries – China, India and the United States – will account for two-thirds of global renewable expansion by 2022. Total solar PV capacity by then would exceed the combined total power capacities of India and Japan today.

In power generation, renewable electricity is expected to grow by more than a third by 2022 to over 8,000 terawatt hours, which is equivalent to the total power consumption of China, India and Germany combined. By then, renewables will account for 30% of power generation, up from 24% in 2016.

The growth in renewable generation will be twice as large as that of gas and coal
combined. Though coal remains the largest source of electricity generation in 2022, renewables close the generation gap with coal by half in just five years.

The deployment in solar PV and wind last year was accompanied by record-low auction prices, which fell as low as 3 cents per kwh (or kilowatt hour). Low announced prices for solar and wind were recorded in a variety of places, such as the United Arab Emirates, Mexico and Chile. These announced contract prices for solar PV and wind power purchase agreements are increasingly comparable or lower than generation cost of newly built gas and coal power plants.

China remains the undisputed leader of renewable electricity capacity expansion over the forecast period with over 360 GW of capacity coming online, or 40% of the global total. China’s renewables growth is largely driven by concerns about air pollution and capacity targets that were outlined in the country’s 13th five-year plan to 2020. In fact, China already exceeded its 2020 solar PV target three years ahead of time and is set to achieve its onshore wind target in 2019. Still, the growing cost of renewable subsidies and grid integration issues remain two important challenges to further
expansion.

Under an accelerated case – where government policy lifts barriers to growth – IEA analysis finds that renewable capacity growth could be boosted by another 30%, totalling an extra 1,150 GW by 2022 led by China. Solar PV and wind capacity in China could by then reach twice the total power capacity of Japan today.

India’s move to address the financial health of its utilities and tackle grid-integration issues drive a more optimistic forecast. By 2022, India renewable capacity will more than double. This growth is enough to overtake renewable expansion in the European Union for the first time. Solar PV and wind together represent 90% of India’s capacity growth as auctions yielded some of the world’s lowest prices for both technologies.

Despite policy uncertainties at the federal level, the United States remains the second-largest growth market for renewables. The main drivers for onshore wind and solar – such as multi-year federal tax incentives combined with renewable portfolio standards as well as state-level policies for distributed solar PV – remain strong. Still, the current uncertainty over proposed federal tax reforms, international trade and energy policies could alter the economic attractiveness of renewables and
hamper their growth over our forecast period.

The report also provides detailed analysis on the renewable consumption of electric cars and off-grid solar deployment in Africa and developing Asia. Off-grid capacity in these regions will more than triple reaching over 3 000 MW in 2022 from industrial applications, solar home systems (SHSs) and mini-grids driven by government electrification programmes and private sector initiatives.

While this represents less than 5% of total PV capacity installed in both regions, the economic impact is
nonetheless significant, and brings basic electricity services to almost 70 million more people in developing Asia and sub-Saharan Africa in the next five years.

Power consumption of EVs – including cars, two- and-three wheelers and buses – is expected to double over the next five years, with renewable electricity estimated to represent almost 30% of their consumption by 2022, up from 26% today. EVs play a complementary role to biofuels, which represent 80% of growth in renewable energy consumption in transport.

However, the share of renewables in total road transport energy consumption remains limited, increasing only from 4% in 2016 to almost 5% in 2022.