SAN FRANCISCO, Aug. 20, 2015 /PRNewswire-USNewswire/ — California’s 40-year commitment to energy efficiency has saved Californians $90 billion on their utility bills, created hundreds of thousands of efficiency jobs, and will have avoided the pollution from 41 power plants by the end of the next decade.

these findings appear in a new report published by the Natural Resources Defense Council (NRDC) and the national nonpartisan business group Environmental Entrepreneurs (E2). However, the report cautioned that a major efficiency ramp-up is necessary to meet the state’s long-term climate and energy goals.

“Energy efficiency is a major success story for California – saving customers billions on their energy bills over the last four decades. But the state needs to double down on policies and programs that encourage smarter energy use to clean the air for all Californians and create local clean energy jobs,” said Lara Ettenson, one of the report’s authors and NRDC’s director of California Energy Efficiency Policy.

The report, “California’s Golden Energy Efficiency Opportunity: Ramping Up Success to Save Billions and Meet Climate Goals,” details the numerous benefits Californians have enjoyed thus far – including monthly household electricity bills that are $20 less per month ($240 per year) than the national average – thanks to the state’s energy-saving programs, building codes, and appliance standards.

The report also shows significant work remains in order to tackle California’s climate and energy goals, and save residential, business, industrial, and agricultural consumers even more money while continuing to stimulate the economy.

“Californians know energy efficiency means jobs and cost savings,” said Bob Keefe, executive director of E2, which is an NRDC affiliate. “We can still reach the state’s goal of doubling our energy efficiency savings by 2030 – but only if our lawmakers and policymakers in Sacramento move more aggressively to advance better energy efficiency policies and programs.”

Without a substantial acceleration and improvements to the existing implementation process, the current trajectory would fall far short of Governor Jerry Brown’s goal to double energy efficiency savings by 2030. Efficiency programs—along with new building codes and appliance and equipment standards—would have to save enough energy over the next 15 years to cut the state’s total electricity needs by almost one-third and its natural gas use by more than 10 percent, according to the NRDC and E2 report.

“We are on track to surpass the energy efficiency savings necessary to help meet the state’s 2020 goal of cutting greenhouse gas emissions to 1990 levels, but we have a long way to go to meet our climate and efficiency targets for 2030 and beyond,” Ettenson said. 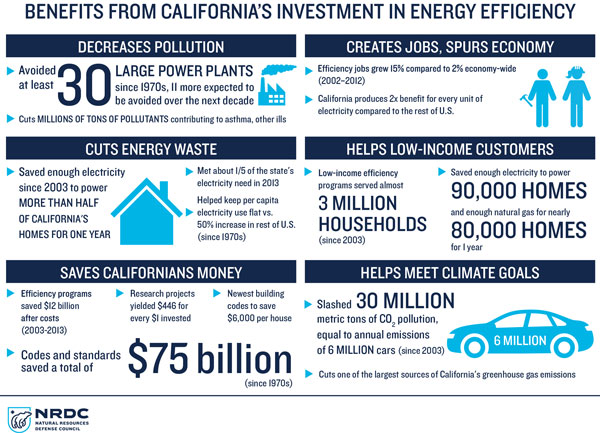 The report, which is an update of a report NRDC published five years ago, includes these additional key findings:

Along with describing the many benefits to California, the report examines challenges with the current energy efficiency framework for customer-funded programs (which include assistance for weatherizing homes or help for businesses to manage their energy use), minimum energy-saving standards for appliances and equipment, and improved building codes to cut energy waste. It also includes detailed recommendations to improve upon the state’s groundbreaking efforts and myriad successes.

Launching California to the Next Phase of Efficiency

Thanks in part to the state’s success with energy efficiency, California is planning to significantly exceed its power plant emissions reductions requirements under the federal Clean Power Plan. The report also contains some case studies of California businesses where energy efficiency has been a factor in their success.

The report is here.

US Acts to promote renewable energy and energy efficiency

Three Ways to Shock Proof Your Business in Turbulent Times