Can we economically outgrow climate change damages? Not for hurricanes we can’t 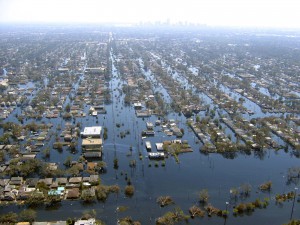 Potsdam Institute for Climate Impact Research (PIK), August 16, 2016 – When hurricanes like Katrina in 2005 or Sandy in 2012 impact on highly populated regions they bring about tremendous damages.

More than 50 percent of all weather-related economic losses on the globe are caused by damages due to tropical cyclones.

Researchers from the Potsdam Institute for Climate Impact Research (PIK) now analyzed the magnitude of future hurricane losses in relation to economic growth.

Showcasing the United States they found that financial losses per hurricane could triple by the end of the century in unmitigated climate change, while annual losses could on average rise by a factor of eight.

Most importantly and contrary to prevalent opinion, they conclude that economic growth will not be able to counterbalance the increase in damage.

“So far, historical losses due to tropical cyclones have been found to increase less than linearly with a nation’s affected gross domestic product (GDP)”, Tobias Geiger explains.

“However, if you analyze losses with respect to per capita income and population growth separately, this reveals a different picture: Our analysis for the United States shows that high income does not protect against hurricane losses. As the number and intensity of tropical cyclones is projected to increase under unchecked global warming, by the end of the century average hurricane losses with respect to national GDP could triple.”

The researchers worked with cutting-edge models linking the storm’s wind speed, the exposed population, and per capita GDP to reported losses, using a newly designed data set for socio-economic and hazard-related predictors.

“We used information about historical hurricane tracks for the Eastern United States to identify the connection between the affected population, average per capital income and associated damages.”, Katja Frieler adds.

“Finally, we applied this relationship to thousands of potential future hurricane tracks that could affect the Eastern United States until 2100 under different levels of global warming.”

Climate change and its consequences: how much can we adapt to?

“Some people hope that a growing economy will be able to compensate for the damages caused by climate change – that we can outgrow climate change economically instead of mitigating it. But what if damages grow faster than our economy, what if climate impacts hit faster than we are able to adapt?,” Anders Levermann says.

“We find that this is the case with hurricane damages in the United States, the hope in economic growth as an answer to climate change is ill-founded. While adaptation to unavoidable impacts of global warming is important, climate mitigation remains of vital relevance to prevent or damp still avoidable consequences”.