Canada’s economy must be stronger, greener and more inclusive – OECD

Montreal, 13 June 2016 – The Canadian economy is adjusting to the fall in commodity prices, but additional policies are needed to boost productivity, reduce financial stability risks and make future growth stronger, greener and more inclusive, according to a new OECD report. 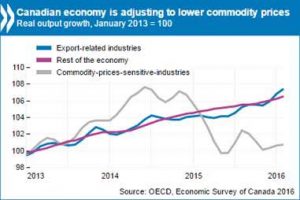 The Survey projects GDP growth of 1.7% this year and 2.2% in 2017, as the economy shifts toward non-resource-based activity.

“The Canadian economy is proving resilient, but continues to face headwinds from the low growth trap facing the global economy,” Mr Gurría said.

“Canada’s economic policy settings are appropriate, given the risky international environment, but there is still scope for reforms to boost competition, stimulate business dynamism and ensure better economic outcomes for all Canadians.”

Continue towards sharing more of the fruits of growth with Canada’s Indigenous Peoples through providing more resources for their education, training, health care, housing, entrepreneurship and environmental infrastructure servicing their communities, as planned.

The Survey points out that vulnerabilities relating to house prices and household debt are acute and says that a continued tightening of macro-prudential measures will be necessary to prevent the risks from building further.  Targeting such measures on the hotspots of Vancouver and Toronto, including through increased capital requirements, may be beneficial.

To boost productivity growth and lay the foundation for future economic expansion, the Survey suggests that Canada eliminate the high barriers to competition in network sectors and reduce foreign ownership restrictions in air transportation, telecommunications and broadcasting, where cultural objectives could be achieved by other means.

Barriers to competition in fragmented electricity markets could be reduced through development of new east-west interconnections, when there is an economic case to do so. Liberalization of the generation and distribution sectors would encourage wholesale and retail competition in jurisdictions that have not done so yet.

Harmonizing provincial and territorial regulations for trade in goods and services would remove key barriers to internal trade and could be promoted through establishment of a pan-Canadian regulatory cooperation council.

Increasing federal investment in physical infrastructure, social housing, education and innovation, as planned, would help make growth stronger and more inclusive, as will the new government’s enhanced efforts to share more of the fruits of economic growth with Canada’s Indigenous Peoples.

Canadian governments should also act on their recent Vancouver Declaration to ensure that an adequate price is placed on carbon emissions across the country to allow Canada to meet its international climate change commitments.

Carbon emissions are high both in per capita terms and relative to GDP, partly reflecting high emissions from road transportation and mining, oil and gas. Some provinces have made largely uncoordinated moves to put a price on carbon emissions.

An Overview of the Economic Survey, with the main conclusions, is freely accessible on the OECD’s web site at: www.oecd.org/canada/economic-survey-canada.htm.

There is a significant environmental dimension to the OECD analysis of Canada’s Economy that you can find in the overwiev on page 53 in the chapter “Improving environmental policies to promote sustainability and productivity”. 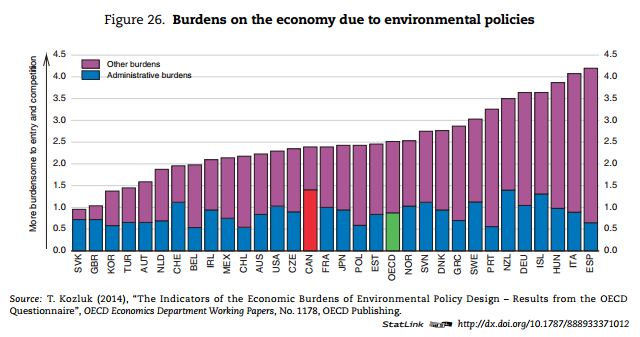