Canada Needs to Clean Up its Carbon Act, says OECD

Ottawa, 19 December 2017 –  A reaffirmed commitment to fighting climate change has set Canada on a greener course, but the country needs to quickly implement planned measures to reduce the carbon intensity of its energy industry, particularly in oil sands, and green its transport sector in order to progress towards its 2030 emissions goals, according to a new OECD report.

The OECD’s third Environmental Performance Review of Canada says that although Canada has reached a stage where it can grow its economy without driving up energy use, air pollution and emissions, it remains the second most carbon-intensive OECD country (after Estonia) and the fourth-biggest emitter of greenhouse gases. Rising emissions from transport and oil production mean that overall, Canada’s emissions have declined by just 1.5% since 2000 compared with an average decrease of 4.7% across the OECD area.

“We applaud Canada’s renewed determination under the current government to tackle climate change, and its leadership in international climate diplomacy at a crucial time,” said OECD Environment Director Anthony Cox. “That said, Canada’s own emissions-cutting objectives for 2030 will stay out of reach without swift and concrete policy action and greater use of economic instruments to wean the country off fossil fuels.” 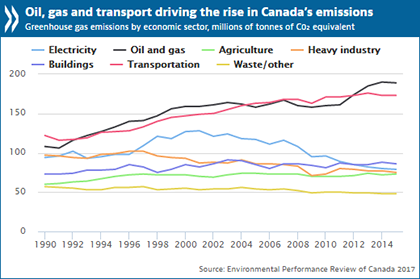 While Canada’s electricity production is very low-carbon, with 82% coming from non-emitting sources like hydro or nuclear, the overall energy supply is not, with 74% coming from fossil fuels. The oil and gas industry – much of it in the province of Alberta and feeding both national needs and a large export market – accounts for a quarter of Canada’s total emissions, and the transport sector another quarter.

While emissions from electricity, heavy industry, buildings, waste and agriculture have fallen or stabilised, emissions from oil, gas and transport have risen significantly since 1990. Oil production from oil sands emits roughly four times as much greenhouse gas per barrel as conventional crude produced in North America. Alberta’s oil sands were behind much of the nearly 20% rise in emissions from oil and gas extraction in Canada over 2011-14.

In terms of progress on climate action, Canada has almost halved fossil fuel support since 2004, although support remains at provincial level. The announced phase-out of coal-fired power generation by 2030 and the planned establishment of a federal clean fuel standard should reduce C0₂ emissions from energy use. This shift is gaining international momentum with the newly launched Powering Past Coal initiative led by Canada and the UK.

Canada is also becoming a pioneer of carbon capture and storage and has made good progress on carbon pricing, with carbon taxes or cap-and-trade systems in place in the four most populous provinces and a plan under the 2016 Pan-Canadian Framework on Clean Growth and Climate Change to introduce carbon prices nationally.

On the other hand, Canada’s use of environmental taxes is the third lowest in the OECD after Mexico and the US. In a country whose vast territory means it generates a great deal more road and rail freight transport per capita, and per unit of GDP, than the average, taxes on petrol and diesel for road use are very low, as are taxes on fossil fuels for industry, electricity and heating. Pickup trucks, which make up four of the country’s ten top-selling vehicles, are exempt from the “green levy” on fuel-inefficient vehicles.

Finally, the report calls on the federal government to fully factor in environmental impacts as it decides which projects to prioritise in its infrastructure investment programme.

Key recommendations in the Review include:

The Race for Clean Energy