Canada, U.S. and Mexico can cut oil and gas methane pollution more than 40% 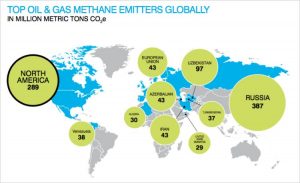 June 14, 2016 – National actions to reduce heat-trapping methane in Canada, the U.S. and Mexico from oil and gas operations can eliminate 232 billion cubic feet of methane below projected levels, according to analysts at ICF International.

Among the speakers were the U.S. deputy energy secretary, Paula Gant, and Mexico’s Rodolfo Lacy Tamayo, Undersecretary of Planning and Environmental Policy SEMARNAT.

The announcement comes as President Peña Nieto, President Obama and Prime Minister Trudeau prepare for the North American Leaders’ Summit in Ottawa on June 29, where energy and environment issues are a key topic for trilateral cooperation.

Methane is a potential issue given the recent US-Canada climate pact and the recognition by all three countries of the importance of reducing methane. If Mexico matches the U.S. and Canadian 40-45 per cent reduction goal and develops regulations to achieve it, North America could see a 20-year climate benefit equal to taking about 85 million cars off the road.

ICF’s North American report, commissioned by EDF, summarizes similar analyses ICF conducted in the U.S. (2014), Canada (2015) and Mexico (2015). All analyses found that reducing methane from key sectors in the oil and gas supply chain is cost-effective and environmentally beneficial.

Even at today’s historically low gas prices, there are many viable solutions for companies to reduce their emissions. On average, the cost of capturing methane would add just one penny to the current price of gas, based on the cost of solutions and the ability to sell the recovered methane, the main ingredient in natural gas.

“As Mexico transforms its energy sector and builds new pipelines, now is the time to ensure methane emissions from the oil and gas industry are reduced. If this doesn’t happen, then as the sector grows, so too will the methane emissions, which could undermine Mexico’s ability to meet its overall climate goals,” said Dr. Mario Molina during a presentation of the ICF Mexico report last fall.

In March, the U.S. and Canada agreed to a historic climate pact that included a goal of cutting oil and gas methane emissions by up to 45 percent by 2025.The central place of methane in this agreement—and as a top priority for both governments—underscores the growing international momentum on this issue.

“This is an important moment for North America,” said Drew Nelson, EDF Senior Manager, Natural Gas. “At the Leaders’ Summit later this month, Canada, the United States and Mexico have an opportunity to take a leadership position and set the example for how the world will deal with oil and gas methane pollution. A commitment of this size and scale will help catalyze global action.”

The government of Mexico previously highlighted oil and gas methane emissions as one way to meet its greenhouse gas reduction targets ahead of the Paris climate talks. Mexico now has the opportunity to demonstrate this commitment at the upcoming Leaders’ Summit and affirm that closer energy ties to the U.S. and Canada also mean cooperation in achieving necessary environmental protections.

Taking a united approach on methane can also improve North American energy integration by making it seamless for multinational oil and gas companies to comply with comparable in-country standards.

“Controlling oil and gas methane emissions is not only feasible and low-cost in Canada, but in all of North America,” said Duncan Kenyon, Pembina Institute Program Director, Unconventional Oil and Gas. “With strong action across the continent to ensure improved energy and environmental regulation integration and alignment, methane is a policy issue ready-made to help improve the state of the environment across North America.”

“It is clear that coordinating climate change approaches and strategies among the three North American leaders will be a priority at the June 29 Ottawa Summit,” said Duncan Wood, Director of the Mexico Institute, Wilson Center. “The Mexico Institute is delighted to foster the trilateral dialogue over the issue of methane emissions reduction, and to work with our partners in the public and private sectors to promote a more constructive conversation in this area.”

“Methane pollution from oil and gas represents an excellent opportunity for COMEXI – Mexico’s leading platform for the discussion of the most relevant issues on the global agenda – to contribute to an informed dialogue about the new international energy scene and the vast opportunities for cooperation in North America,” said Susana Chacón, member of the Council’s board. “

As COMEXI’s Energy Working Group has stated before, cooperation in this area among Canada, the U.S, and Mexico will position our region as the most competitive in the world.”

Natural gas is over 95 percent methane and is a potent greenhouse gas contributing to climate change, because its short-term impact is many times greater than carbon dioxide.  Methane is responsible for 25 percent of current warming. Globally, the oil and gas sector is the largest industrial source of methane.

A 45 percent reduction in global oil and gas methane emissions has the same impact on the climate over 20 years as closing one-third of the world’s coal plants.

The EDF-MMC-Pembina policy brief, “North American Climate Leadership: A road map for global action”, can be found here, along with ICF’s report, “Summary of Methane Emission Reduction Opportunities Across North American Oil and Natural Gas Industries”. Both are available in English and Spanish.

Canada’s economy must be stronger, greener and more inclusive – OECD