TORONTO— May 27 2015 – A new study on Canada’s clean technology industry warns that, despite outgrowing the rest of the economy, the sector is losing global market share and needs government policy support.

The fourth annual report card by Analytica Advisors found that more than 800 clean tech firms in Canada directly employed almost 50,000 people in 2013, making the industry a bigger employer than the aerospace manufacturing sector, logging industries or pharmaceuticals and medical devices.

Yet even with $12 billion in exports of manufactured environmental goods, Canada’s share of the booming global market has been in steady decline.

The study finds that among the world’s top 24 exporting nations of environmental goods, Canada has been the third biggest loser of market share since 2008, behind only the United Kingdom and Japan. 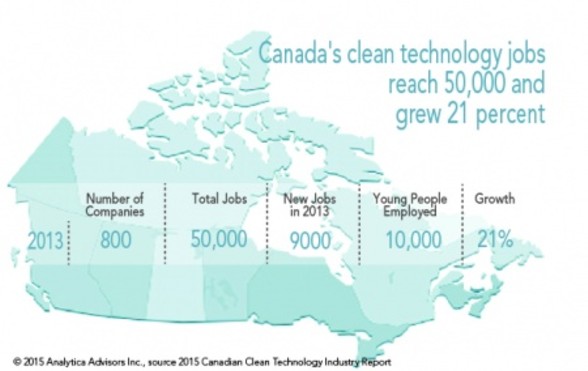 And the report’s author, Analytica president Celine Bak, is concerned Canada’s clean technology industry could be following the arc of globally competitive satellite, telecommunication and biotech firms that flowered in Canada only to take root elsewhere in the world.

Bak says her study is a good-news, bad-news report that points to the need for policy co-ordination across federal and provincial jurisdictions to help the industry mature into a globally competitive market force.

“We have a terrific industry that’s creating jobs, but our traction in terms of international trade is not as great as it should be because the (global) market is growing so quickly,” Bak said in an interview on the eve of Wednesday’s report release at the Canadian Energy Summit in Toronto. 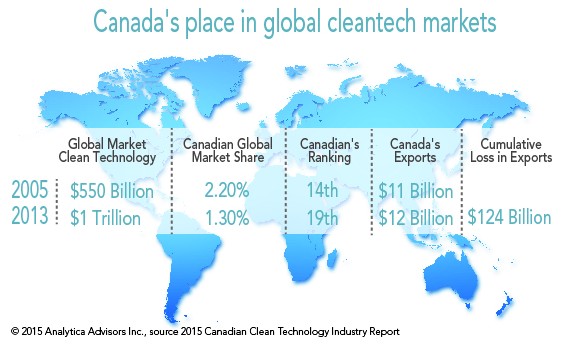 “It should be fairly straightforward to take the next step so that the investments that have been made in early research — the investments in development and demonstrations — now are translated into jobs, exports and environmental stewardship.”

Debt financing in particular is a problem for a young industry making the leap from research and development to industrial-scale deployment, production and expansion.

Michael Delage is vice-president of technology and corporate strategy at General Fusion, a Burnaby, B.C., company that is one of a handful globally working to create a fusion power plant.

“We’re still fairly early on — proving out some of the core systems and underlying technologies and some of the fundamental science, that’s the stage we’re at,” said Delage. “The next step is going to be to build a full-scale system. We’re a few years out from where we would start that project.”

Canadian governments have invested in innovation and helping companies take technology to the point where it can be demonstrated at scale, he said. But a lot of capital may be required to get the technology into a first industrial application, at which point the private sector steps in. 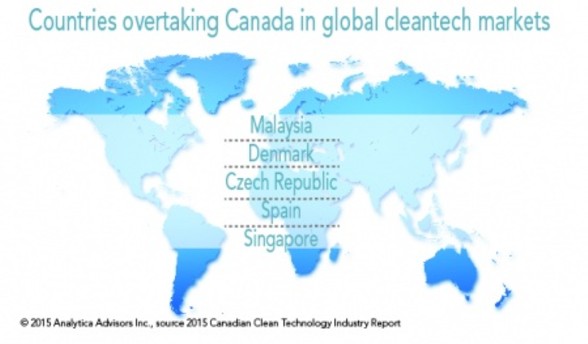 “Just look at carbon policy — it’s a bit all over the map across the country. If we we’re serious about playing as a team and finding ways to be successful economically, better collaboration on consistent policy would go a long way.”

The report synopsis is available here

A month of extreme weather around the world – something is stuck

How to accelerate energy efficiency in BC’s buildings: new report