Carbon Taxes Can Cut Emissions and Grow the Economy 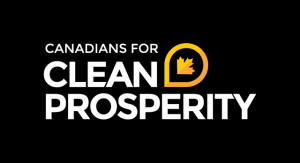 GLOBE-Net, September 7, 2016 – A new report from Canadians for Clean Prosperity has shown that a carbon tax can cut Greenhouse Gas emissions while protecting, or even bettering economic growth.

Canadians for Clean Prosperity Executive Director, Mark Cameron, a former policy director for Prime Minister Stephen Harper, said “With the provincial and federal governments expected to announce a national climate change plan this fall, Canadians should be asking how we can we meet our targets at the lowest possible cost to the economy.”

The study investigated both existing kinds of carbon taxes in Canada, the straight tax model in place in British Columbia since 2008, and the proposed Hybrid Tax that Alberta is scheduled to implement in 2018.  The study assumes that carbon pricing would start at $30 a tonne in 2018, and rise to $110 a tonne by 2030.

The British Columbia straight tax model covers buildings, transport, light manufacturing and large industrial emitters, and the study added in fugitive and process based emissions as well, such as natural gas leaks from oil and gas wells, as well as GHG emissions from cement production. These are not currently included in the BC’s carbon tax. The same tax rate is applied to all carbon from all sources.

The Hybrid model applies the same flat tax to most sources of emissions, similar to the British Columbia model, but Emissions Intensive Trade Exposed (EITE) industrial emitters are treated differently. They are allocated output-based allowances corresponding to their output and GHG emission intensity, which they are allowed to trade.

Both proposed uses of revenue generated by the tax were looked into as well. BC’s carbon tax is revenue neutral, with 90 percent of its proceeds used to reduce personal and corporate taxes, and the remaining 10 percent returned to the hardest hit households.  The other proposed use is to fund programs that further reduce GHG emissions, a common example being public transportation. 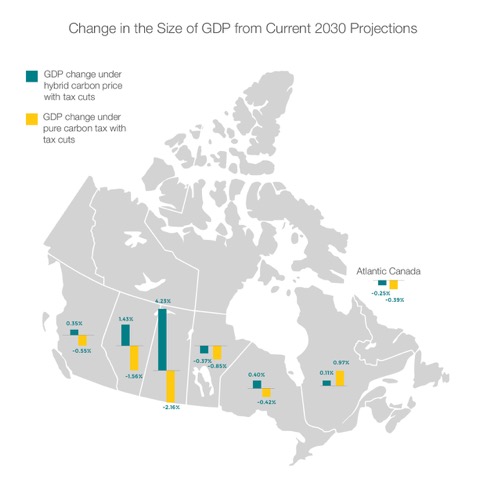 The results present an attractive picture. With the Hybrid system, Saskatchewan is predicted to reduce its emissions by 33 percent under 2005 levels by 2030, while maintaining GDP growth of 4.23 percent (instead of 10 percent emissions growth with no changes from the status quo). Alberta could see 1.43% GDP growth alongside a 20 percent reduction in emissions under the Hybrid system during the same timeframe.

According to the report the British Columbia model is slightly better than the Hybrid model with respect to GHG emissions reduction, at a lower cost per tonne of carbon, with 15 percent reduction under 2005 levels by 2030.

However the Hybrid system provides a 14 percent reduction, while actually increasing economic growth in many provinces. This model reduces the strain on energy heavy Western provinces, which Clean Prosperity acknowledges are where many of the emissions reductions must come from, and “works admirably when scaled up on a Canada-wide basis”.

As noted by Mark Cameron “… a hybrid model will lead to major progress on meeting reduction targets, while limiting regional impacts and boosting economic growth.”

The full study is available here