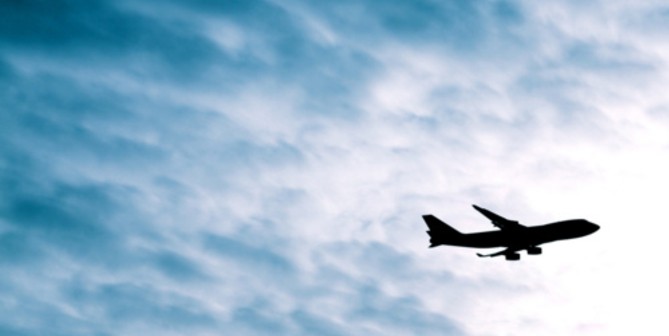 LONDON, 14 July, 2015 − Global warming may already be taking its toll of air miles. As jet planes burn fuel and release carbon dioxide, the atmosphere warms and causes head winds to build up. Tail winds do too, but round trip journey times are nevertheless creeping up − and so are fuel costs.

A team of US scientists say the cumulative effect of the longer flight times that they think may have resulted from climate variation would have added millions of dollars to airlines’ costs, and perhaps a billion gallons of extra fuel.

Kristopher Karnauskas, an associate scientist in geology and geophysics at Woods Hole Oceanographic Institution (WHOI) in the US, and colleagues report in Nature Climate Change that they analysed flight times and daily wind speeds at cruising altitudes for four airlines on three routes over the last 20 years.

They then used 34 different climate models to identify how the winds, and flight times, might have responded to climate variation, and how the response might continue.

The flight paths chosen were between Honolulu and the three West Coast airports of Los Angeles, San Francisco and Seattle. The team found that, in general, eastbound flights were faster than westbound for all carriers, and that climate change had made a difference of about a minute per round trip, with a small extra cost in fuel on each flight.

This showed that the eastbound trip might be 10 minutes shorter, the westbound trip was 11 minutes longer, and most of this difference could be accounted for by natural cycles based on changes in ocean temperatures.

The cycles include El Niño, that periodic bubble of heat that appears at intervals in the Pacific, to upset climate patterns, bring drought and fire to the Indonesian rainforests, floods to California, and upset the fisheries off the coast of Peru.

During the 20 years studied, the four airlines made 250,000 flights on those three routes, so the tiny differences began to add up to substantial costs in time and fuel.

The oceanographers then looked ahead to the wind speed predictions of the climate models, and found that this could add an additional 5.5 hours per round trip, per carrier, per comparable route.

This in turn would extrapolate to an additional 480,000 US gallons of jet fuel consumed, and an additional 4.6 million kilograms of carbon dioxide emitted, each year. This is small in terms of the overall emissions figures for the airline industry, but the researchers’ sample was of just a tiny proportion of all global flights.

In 2014, commercial airlines made 102,470 flights a day on 49,871 routes. If each plane spent just one extra minute on each round trip flight, that would mean that commercial jets would spend 300,000 hours longer in the air, burn an additional billion gallons of jet fuel, and emit an extra 10,000 million kilograms of CO2 per year.

Global warming already costs the airlines increasing airtime and wear and tear because atmospheric turbulence seems to be on the increase.

However, the oceanographers’ study began not because of a bumpy ride, but because of an unexpectedly smooth one.

One co-author of the report, Hannah Barkley, a graduate student at WHOI, had noticed that a direct flight back from Honolulu to the east coast of the US took far less time than expected, and asked Dr Karnauskas why he thought that might be.

In fact, the jet stream that day was exceptionally fast – and the research started from that point.

The scientists found, by looking at 20 years of data, that for every 10mph speedup of the prevailing wind, there was a difference of perhaps a couple of minutes in flight time. They called the there-and-back difference “the residual”.

“The wind really fluctuates by about 40 mph, so multiply those couple of minutes by each flight per day, by each carrier, by each route, and that residual adds up quickly,” Dr Karnauskas says.

Investing Today for a Brighter Tomorrow – An Editorial by Sergio Marchi