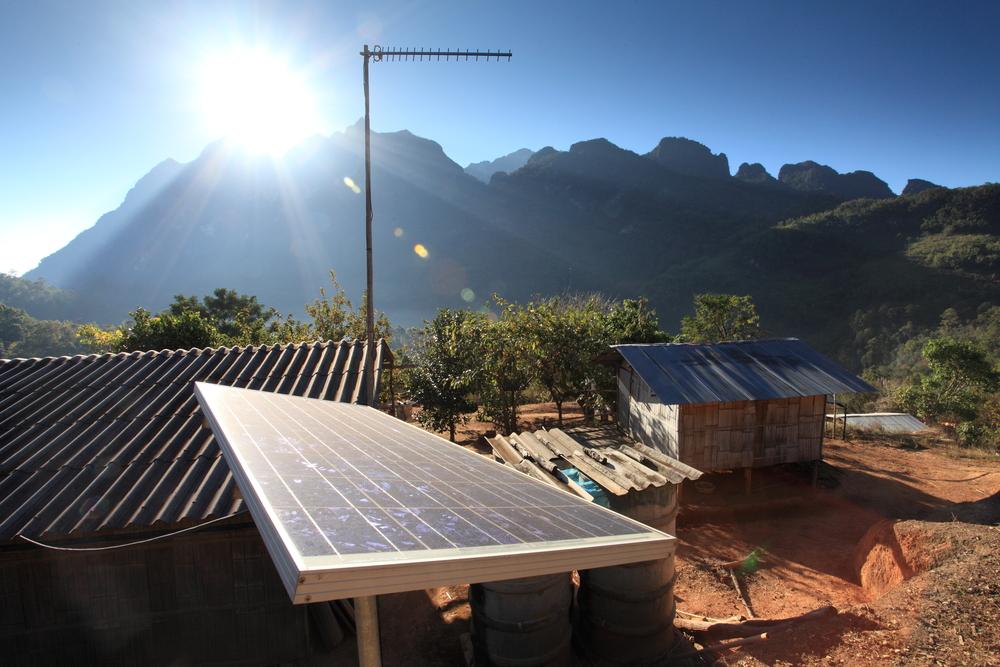 Many of these people rely on unhealthy polluting kerosene lamps for nighttime lighting. Those with access to electricity in the developing world often rely on coal- or diesel-based grid power.

Thus electrification is both a humanitarian issue and a climate issue. Access to electricity improves health, education, economic development, and overall quality of life. But electrifying populations by expanding an already dirty and unreliable grid would greatly increase carbon emissions—increasing carbon emissions by an estimated 141 percent in Sub-Saharan Africa and India by 2040 under business as usual.

That’s the current energy ladder. It’s not only far too great a leap for the unelectrified to reach the other end, but the world can’t afford for them to reach the other end by burning more fossil fuels. And although many people are forecast to gain electricity access in the next 20 years in the developing world, population growth in those regions will offset almost all of it.

“The system today to provide power to the rural poor across the developing world isn’t working,” says RMI manager Roy Torbert. “We are on track to have as many people in 2030 without access to power as we do today. A new approach is needed.”

Thus the crucial need for solar energy. Decentralized solar energy provides clean, reliable, low-carbon electricity, and can power communities both large and small. A new solar-based energy ladder, with each rung in reach of the next, can enable families and communities to climb out of energy poverty to energy access, thereby supporting economic development and eventually halting coal’s expansion.

Over 250 million households use kerosene for lighting. This has devastating consequences for the women and children who breathe kerosene fumes daily—equivalent to smoking two packs of cigarettes a day.

Fortunately, many entrepreneurs around the world have achieved impressive success with solar lanterns, which provide better-quality light than kerosene lanterns without any harmful fumes. d.light, a company that manufactures affordable and rugged solar lanterns, has sold over nine million solar lights in 62 countries since its founding in 2006. 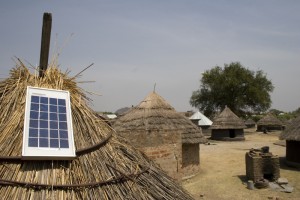 Fifty Lanterns is a nonprofit organization providing solar lanterns to people in communities torn by poverty, war, or disaster. Its current program is working with a group of 7,000 Ugandan grandmothers who lost their children to AIDS and are now caring for their orphaned grandchildren. “For only $50 we can provide a grandmother with life-changing solar light that will help prevent open flame burns and toxic fumes,” says Fifty Lanterns executive director Linda Cullen.

Other organizations focus on small solar home systems. These systems, anywhere from 10 to 100 watts, allow people to light their homes, recharge cell phones, and run a small appliance or two. These systems have proven to be affordable with financing, even to people earning under $2 per day.

Yet this is where the current solar ladder breaks down. While it is important to start small for affordability, there needs to be a way to grow. Being able to add solar panels modularly and having standardized solutions to create interoperability between systems will create the ability to transition from solar home systems to solar mini grids or microgrids.

Modular solar mini grids are exactly what Devergy, a Dutch company working in Africa, has deployed in several villages in Tanzania. These mini grids power households and small businesses in six villages, connecting 800 customers to clean, reliable solar power. “After seeing many unmaintained solar home systems traveling through South America, we realized we needed to create a system that is interactive,” says Gianluca Cescon, cofounder Devergy.

“Through smart meters we can monitor what’s going on.” Devergy decided it could have a greater impact by linking many solar home systems together, and after many prototypes came out with the mini grid it uses in Tanzania today.

“Using a modular system, designed to be interoperable and durable, communities can tailor their power supply to their individual needs, and grow their solar and battery systems according to the most relevant demands,” says RMI’s Torbert.

Bridging into even larger, community-scale microgrids will enable development that supports quality of life and countries’ economic aspirations, and halt coal’s expansion into these to-be-electrified parts of the world. “We need to bridge the gap between household or small business use and more energy-intensive productive uses such as rice milling and corn milling,” according to Devergy’s Cescon. 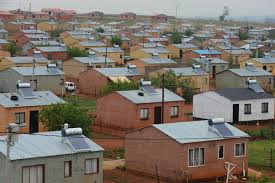 “But if we want to get to the next level of increased economic opportunity, we need to look beyond solar home systems to larger community scale microgrids.” SELF’s first two solar microgrids will power a microenterprise center in Haiti, and a school, health clinic, and micro-enterprise facilities in Colombia. By powering larger facilities and more energy-intensive businesses, solar microgrids allow individuals, businesses, and entire communities to develop and thrive.

Though all these projects are successful at various scales in areas around the world, each rung of the solar energy ladder—from lanterns to microgrids—needs to scale faster and broader, to meet the colossal need. Yet this brings with it new challenges and complications, including infrastructure challenges, local tariffs and regulation, and inconsistent product quality and reliability.

“There has not been a lot of attention to detail in terms of the quality of services provided,” says Charles Muchunku, chairman of the Kenya Renewable Energy Association.

“This leads a lot of people to believe that solar doesn’t work.” One crucial step is a standardized design, which will both increase modularity and lower cost. “A low-cost, standardized solution does not fix every problem, but it does create a base from which individual communities can build,” says Torbert.

A large-scale procurement process will further drive down costs and reduce supply chain inefficiencies. This will ensure time to market is fast and reliability is high. Also key are innovative financing solutions that work for both developed-country investors and the rural poor. While many microfinancing and payment mechanisms currently exist, these solutions need to be greatly scaled. Finally, we need deployment solutions that can scale rapidly with existing infrastructure.

Once these barriers are addressed, people on the bottom end of the energy ladder will have access to a full suite of energy services, while avoiding the negative consequences of fossil fuel development. “Economic development in developed countries brought a centralized government approach to rural electrification,” according to Stephen Doig, a managing director at RMI.

“Yet, much as mobile telecommunications leapfrogged landlines, solar energy presents a way for developing countries to choose a different path.” We must build a new solar energy ladder by making it cheap, easy to finance and pay, and customizable.

Then people can climb the ladder by using electrification to power economic activity and entrepreneurship. In that way we create a scalable solar energy ladder that can both help alleviate energy poverty and mitigate climate change, bringing us closer to a clean, prosperous, and secure energy future.

Laurie Guevara-Stone is the Writer/Editor for RMI, where she writes blogs and articles on all the issues that RMI addresses.  This article was Originally posted on RMI Outlet and is reprinted here with the kind permission of the author and RMI. Images courtesy of Shutterstock.com

Is the low-carbon economy a business opportunity, moral mandate, or both?