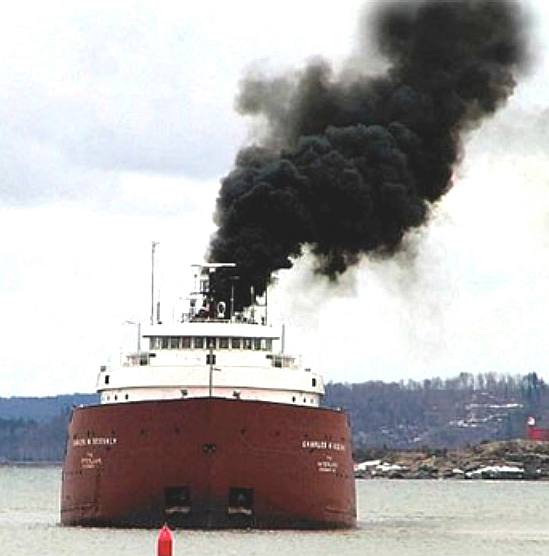 Compared to all other institutions in the world, corporate enterprises have the most significant impact on the environment. According to the Carbon Majors Report published by the Carbon Disclosure Project in 2017, 100 companies are responsible for 71 per cent of global emissions.

Given corporations’ contributions to climate change — and other environmental issues — executives need to understand both the impacts and solutions to the world’s environmental concerns. As a corporate strategy and innovation researcher, I was curious about the level of sustainability understanding and innovative problem-solving among top executives at companies that operate at sea, including oil and gas, shipping and logistics, mining and minerals, cruise lines and agriculture.

The United Nations’ Sustainable Development Goals provide a blueprint for sustainable organizational practices. Corporations should be cognizant of these areas and make productive efforts toward sustainable development. For companies operating at sea, marine conservation and the sustainable use of oceans, seas and marine resources should be a top priority.

Growing marine traffic is expected to add to friction, such as collisions or the introduction of invasive species, between ships and ocean life. Global transportation and logistics forecasts suggest maritime traffic could increase by as much as 1,209 per cent by 2050. The preservation of ocean life requires deliberate measurement and management in the form robust environmental, social and corporate governance (ESG) reporting by those companies operating at sea.

ESG reporting, however, is still in its infancy and marine impact measures are more qualitative than quantitative. My recent research shows that reporting practices on environmental, social and corporate governance among companies operating at sea are not a top priority and puts the health of the marine environment at risk.

The rise of CSR and ESG

Today, most CEOs subscribe to the stakeholder theory that argues a firm’s purpose is to create value beyond its shareholders.

Since the 1960s, stakeholder theory has been the dominant perspective among businesses. Corporate social responsibility (CSR) is a firm’s commitment to fulfil its social and environmental obligations in pursuit of its economic objectives. Not only does CSR benefit society, it also enhances competitiveness and business performance among participating enterprises.

According to a 2006 study by leading strategy researchers, Michael Porter and Mark Kramer, CSR “has emerged as an inescapable priority for business leaders in every country.”


Over the past 20 years, businesses have also focused on measuring their environmental and social responsibility efforts. In contrast to the ideals and goals CSR qualitatively identifies, environmental, social and corporate governance (ESG) reporting quantitatively measures firms’ CSR impacts and progress.

Preserving life below water is one of the UN’s sustainable development goals. But many of the reports examined in my study excluded marine life and ocean sustainability metrics.

Among the reports that included information on marine life, the approaches to measure impact and progress had not been standardized, yielding a poor and ineffective quantitative environment. The executives of these companies described the importance of action and disclosure of progress in this area, but lacked the specific knowledge to measure and manage their impact.

It is evident from the reports and interviews that ESG reporting standards must be established, and precisely indicate how companies can fulfil their social responsibility in this area.

My research also confirmed prior work that suggests ESG reporting in the area of marine life is qualitative and superficial.

Many executives communicated that they face a myriad of public issues and do not prioritize reporting on marine life, such as the impacts their operations might have on marine animals, their efforts to preserve biodiversity, and ocean pollution. Instead, they said their ESG reports were designed to provide a high-level summary of their commitments and progress toward ocean sustainability.

However, executives acknowledged that their operations at sea are deemed to be less concerning to the general public as compared to other issues because they were less visible. Accordingly, ocean life sections of ESG reports were not as in-depth as others, such as clean energy.

The final and most concerning finding was the reactionary approach for the executives to change. They described how they would take necessary steps toward change, but only out of necessity for survival.

As one CEO stated: “There are so many issues and we can’t always be proactive. If we were required to make changes to how we operate and report, we always would. But the push would have to come from the public or regulators.”

This is a problem given the importance of the ocean’s ecosystem to overall planetary health. Tiny ocean plants called phytoplankton, for example, produce 50 percent of the oxygen in the air we breathe. There is, however, some hope.

As Peter Drucker, an Austrian American management consultant, educator and author, aptly stated: “What gets measured gets managed.” Without meaningful, specific and quantitative measures to assess progress and innovations that support change, success in reaching environmental goals is unlikely.

The findings of my research are somewhat promising, as they show executives are willing to commit more resources to sustainability efforts. However, it is evident that there needs to be a clear path and support for such efforts from all stakeholders. It is concerning the sustainability efforts of our most precious resource are nebulous and not considered a top priority.