The Elephants of Antarctica & Greenland 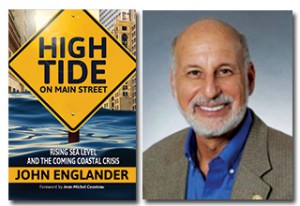 August 12, 2016 – Today I got a message from an environmental group advising it was World Elephant Day. Pachyderms are amazing creatures worthy of our respect and protection.

It got me thinking however, since I often talk about the “elephant in the room” referring to the glaciers in Greenland and Antarctica. They are the proverbial elephants in the room in terms of potential sea level rise (SLR).

Already, streets are flooding like never before, from Miami to San Francisco and from Boston to Bangladesh — in fact, low-lying coastal areas all over the world. Major projections from the UN and various scientific groups have been projecting a possible foot of SLR by mid century and as much as three feet byh the end of this century.

Those possible 3 feet take into account the melting of glaciers from Alaska to the Alps and even Africa, and the minute expansion of seawater as the oceans warm. Those facts in SLR can be quantified fairly accurately, so they are tabulated.

What is rarely explained is that such projections omit the major glaciers in Greenland and Antarctica – the “elephants in the room” — or perhaps that should be the elephants that are preparing to go for a swim.

The reason they are omitted is that it is extremely difficult to predict exactly how quickly the glaciers will slide into the ocean, melt and run into the sea, or break off into icebergs – all of which have the effect to raise sea level worldwide.

Scientists do not want to report a number unless they have high confidence. Like predicting an earthquake, avalanche, tornado, or tsunami, large geophysical events like the collapse of the largest glaciers defy specific prediction. (For more, see http://www.johnenglander.net/sea-level-rise-blog/inability-predict-slr-similar-avalanche-problem)

The fact is that we do not know exactly how quickly the large Jacobshavn (“yak-OBS-hov-en”) glacier of Greenland will slide into the sea causing about a foot and a half of global SLR. Nor the six unstable glaciers in West Antarctica known as the Pine Island Glaciers that have been calculated to hold ten feet of global SLR.

These are giant lumbering rivers of ice, a couple of miles thick, several miles wide, and tens of miles long. The fact that global temperatures are warmer than in all recorded history makes it extra difficult to know how long it will take for these to melt and add to sea level. What we do know is that they are melting faster and faster, ahead of most predictions.

So most studies measure the smaller glaciers in Alaska, in Glacier National Park or Kilimanjaro in Africa, where it is possible to get a reasonable estimate on the addition to sea level, plus the increased height from the warming ocean – all of which are effectively “the mice” in the room — the small stuff. In fact there are almost 200,000 smaller glaciers in the world that have been identified and are being tracked. Nearly all are shrinking and will disappear. The total of those gets us to about 3 feet of sea level rise this century.

The elephants are the big glaciers of Greenland and Antarctica, which effectively do not fit on the scale and thus cannot be measured along with the mice.

Perhaps visualizing an elephant getting ready to enter a home swimming pool helps to make the image. It is easy to grasp that the water level would rise and flow over the edge of the pool.
Similarly, the melting ‘elephants’ of Antarctica and Greenland are starting to have a noticeable effect on the water level of the global ocean. The ten or twelve feet of rise that will come from just the half dozen individual glaciers identified above is something for which we need to begin planning ASAP.

Those few glaciers are just the beginning. The larger areas of Greenland and Antarctica, the giant sheets miles thick, represent roughly two hundred feet of potential sea level rise. That has not melted for tens of millions of years. Let’s hope we can get our act together and slow the warming, so that does not happen for thousands of years.

But in the meantime, regardless of our success at slowing the warming, it is time to start planning for higher sea levels and a shifting shoreline.

The “elephants” of Greenland and Antarctica are on the move, flexing their big bodies, and getting ready to go for a swim in the ocean.

We have time to begin adapting to the new reality, but we really have no time to waste.