Energy Efficiency – Generating more value from the energy we use

5 October 2017 – The recent acceleration in global energy efficiency gains risks slowing down if governments do not maintain their focus on implementing new efficiency policies, according to a new report by the International Energy Agency.

Global energy intensity – the energy used per unit of gross domestic product – fell by 1.8% in 2016, a sign the global economy generated more value from its energy, according to the IEA’s Energy Efficiency 2017 report. Improvement seen in 2016 confirms the strong progress seen since the start of the decade.

But this progress masks some concerning policy trends. While efficiency codes and standards grew to cover about 32% of global energy use in 2016, nearly all of the increase in coverage came from existing policies and over two-thirds of global energy
use is still not covered. The IEA’s Efficiency Policy Progress Index also reveals that the strength of policies increased at their slowest rate in recent years and rates of progress vary significantly across countries.

“There was a noticeable slowdown in the implementation of new policies in 2016, and this trend appears to be continuing in 2017,” said Dr Fatih Birol, the IEA’s executive director.

“Countries should focus on attacking the more than 68% of global energy use that is not covered by efficiency codes or standards. A key IEA mandate is to help countries pursue this very important goal by sharing best practices and learning from each other.” 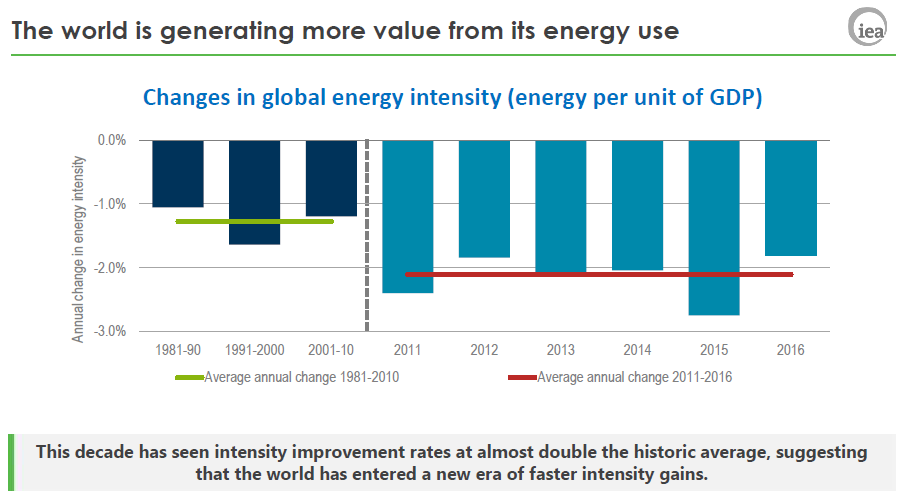 The report highlights potential areas for further policy action. For example, only four countries regulate the efficiency of trucks, and space-cooling demand is rising fastest in countries with the weakest air-conditioning efficiency regulation. Energy Efficiency 2017 details why more efficiency action is needed, highlighting the significant benefits to the global economy, energy system and environment.

Improvements in energy intensity have been the most significant factor in keeping global greenhouse gas emissions flat over the last three years. The success of decarbonisation efforts around the world hinges on integrating energy efficiency policies, renewables and other tools into the energy system through a harmonised policy approach.

The world would have used 12% more energy in 2016 without the efficiency improvements achieved since 2000, which is equivalent to adding another European Union to the global energy market. And households across the world are spending less on energy as a result of efficiency. German households, for instance, spent USD 580 less per capita on their energy bills last year thanks to energy efficiency policies.

Technology innovation is also creating new opportunities for progress on energy efficiency, such as integrated solutions where efficiency and renewable energy work together to deliver clean energy outcomes at lowest cost.

The number of connected devices in use by households worldwide is growing substantially. These devices, which can be connected to networks and other devices, provide new opportunities for energy savings through more accurate control of how much energy is used.

Stationary Energy – Sales Up, Costs Down