June 22, 2015 – When a deadly heat wave lingers for an especially long time; when a hurricane makes landfall with particular ferocity; or when droughts, winter storms or cold snaps break records, the public is increasingly interested in knowing if human-induced climate change played a role.

Attributing individual extreme weather events to a warming climate is difficult work. Even so, scientists have been making an effort in recent years to determine when a connection can be detected.

In a new “Perspective” piece published in Nature Climate Change, scientists at the National Center for Atmospheric Research (NCAR) and the University of Reading argue that many researchers looking for links between the two have been asking the wrong question. The result, according to the authors, is that human-induced climate change hasn’t always gotten the blame it deserves.

How did our changing climate affect this drought in Colorado last decade? ©UCAR. Photo by Carlye Calvin.

How did our changing climate affect this drought in Colorado last decade? Scientists are proposing a new way to access the influence of climate change on extreme weather events.

BEYOND CAUSE: LOOKING AT ENHANCEMENT

The most common approach used by researchers to look for connections between climate change and extreme weather events has been to ask whether the strength or likelihood of the entire event was affected by the changing climate. The problem, according to Trenberth, is the focus on the “entire event.”

The atmospheric ingredients that must come together to create an extreme weather event—the track of the jet stream, for example; the location of a low pressure system; or the presence of El Niño conditions in the Pacific—mean that extreme weather events are driven largely by chance, Trenberth said.

And while climate change may contribute to the list of ingredients needed to create a typhoon, snowstorm, or other weather phenomena, that contribution is fairly small compared with natural variability. The upshot is that it’s difficult for a scientist to ever say that climate change led to the atmospheric set up responsible for an extreme weather event.

This difficulty has been highlighted in recent years as scientists have tried to determine whether climate change led to a handful of high-profile weather events, from the unrelenting drought in California to the epic floods on Colorado’s Front Range to Superstorm Sandy’s battering of the Northeast. In all three cases, some studies found climate change could not be blamed.

Trenberth and his co-authors—John Fasullo, also of NCAR, and Theodore Shepherd, of the University of Reading—agree that the answer to the question of whether or not climate change contributed to the actual formation of the extreme weather events could reasonably be “no.” A better approach, they say, would be to assume the weather event would have happened regardless, and then ask whether climate change could have made the event more extreme.

“There’s a huge element of chance in what happens during these extreme events,” Trenberth said. “But given that the event occurred, were the impacts greater because of climate change?”

In all three cases—the California drought, the Colorado floods, and Superstorm Sandy—as well as in many other recent extreme events, the authors argue that climate change did increase the impact.

For example, there is consensus among scientists that human-induced climate change is causing surface temperatures to warm. In California, these hotter-than-average temperatures can compound existing drought conditions by increasing the amount of water evaporated into the air.

Similarly, warmer-than-average sea surface temperatures off the coast of Mexico during the Colorado floods—attributable in part to climate change—added more moisture to the air that flowed into Colorado, allowing for heavier rain than would have fallen otherwise.

Warm seas likely played a role in amping up Superstorm Sandy. Additionally, the fact that sea level has risen due to climate change means that Sandy’s surges were able to wash further inland.

“We actually do know something about why some of these events are breaking records,” Trenberth said. “But if we scientists don’t ask the right questions, then our results can lead the public to think that climate change isn’t a factor when it is.” 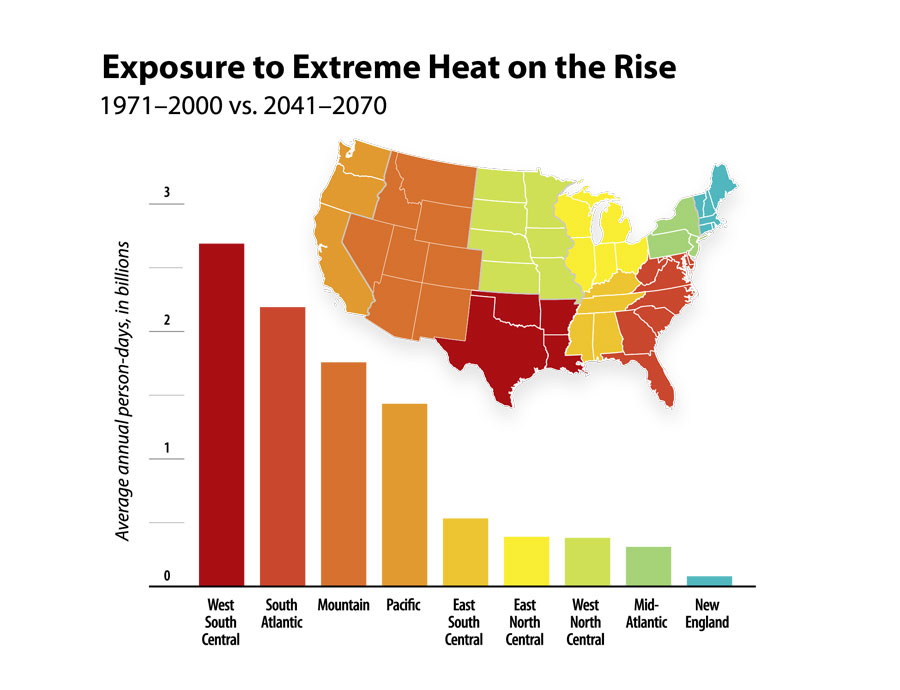 A warmer atmosphere can hold more water, so one of the primary ways human-induced climate change influences weather events is by increasing the amount of available water. The impact of this additional water can often be quantified with the help of models. If a model does a good job of simulating how a weather event unfolded, then it can be run again with some impacts of climate change essentially removed. In particular, the ocean can be cooled to represent an unchanged climate.

For example, Superstorm Sandy was well predicted by the European Centre for Medium-range Weather Forecasts a week ahead. ECMWF ran the same five-day forecasts that predicted Sandy again, but with slightly cooler sea surface temperatures that were closer to the average for the previous two decades.

When the ECMWF team compared the two, they found that the storm’s track, including its distinctive hook leftward toward land, did not change when the sea surface was cooled. But the storm was less intense. The researchers concluded that the additional heat from the ocean caused a 35 percent increase in precipitation, as well as an 8 mph increase in wind speeds.

Solar fuels: how planes and cars could be powered by the sun