The Covid-19 pandemic has triggered the most severe recession in nearly a century and is causing enormous damage to people’s health, jobs and well-being, according to the OECD’s latest Economic Outlook.

As restrictions begin to be eased, the path to economic recovery remains highly uncertain and vulnerable to a second wave of infections. Strengthening healthcare systems and supporting people and businesses to help adapt to a post-Covid world will be crucial, it says.

The containment measures brought in by most governments were necessary to slow the spread of the virus and limit the death toll, but they have also closed down business activity in many sectors and caused widespread economic hardship.

Policymakers have used a vast array of exceptional measures to support healthcare systems and people’s incomes, as well as to help businesses and stabilize financial markets.

With little prospect of a vaccine becoming widely available this year, and faced with unprecedented uncertainty, the OECD has taken the unusual step of presenting two equally likely scenarios – one in which the virus is brought under control, and one in which a second global outbreak hits before the end of 2020.

If a second outbreak occurs, triggering a return to lockdowns, world economic output is forecast to plummet 7.6% this year, before climbing back 2.8% in 2021. At its peak, unemployment in the OECD economies would be more than double the rate prior to the outbreaks, with little recovery in jobs next year. 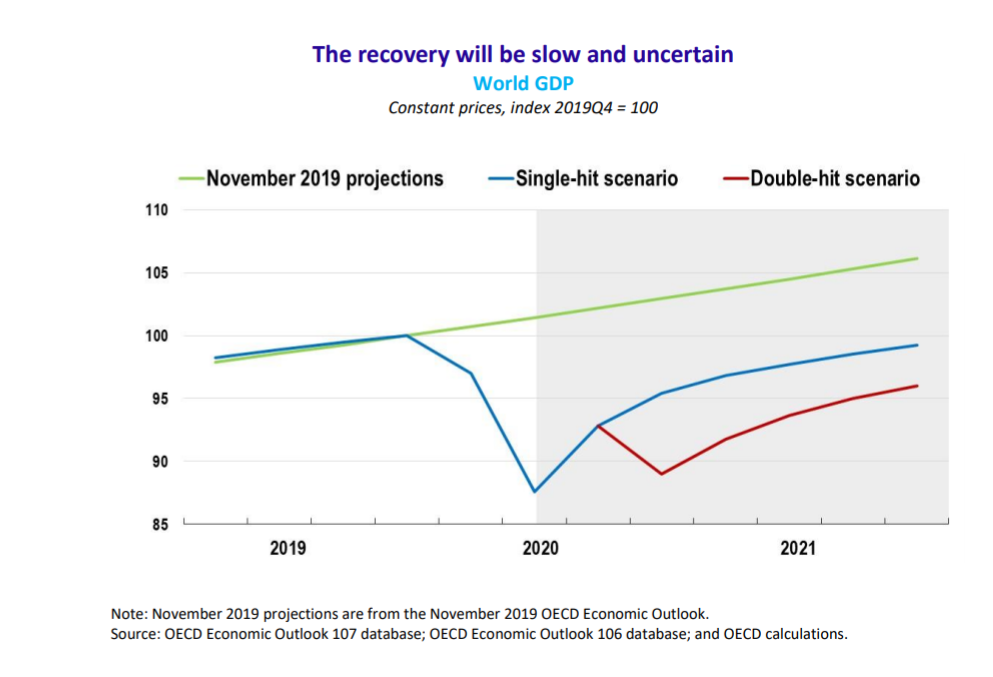 In both scenarios, the recovery, while initially rapid, will take a long time to bring output back to pre-pandemic levels, and the crisis will leave long-lasting scars ̶ a fall in living standards, high unemployment, and weak investment. Job losses in the most affected sectors, such as tourism, hospitality and entertainment, will particularly hit low-skilled, young, and informal workers. 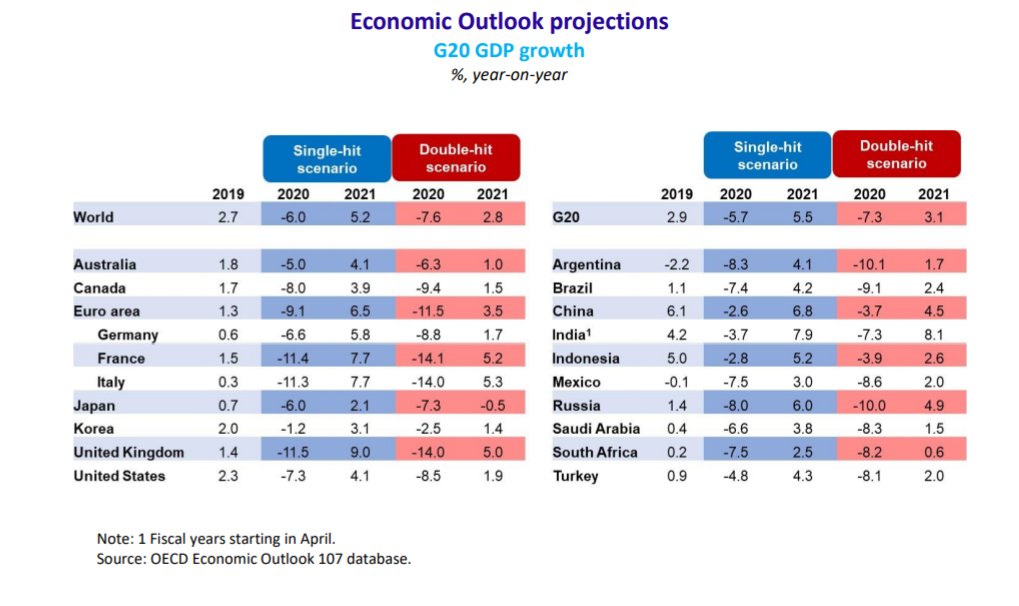 The Outlook says government support to help people and business in the hard-hit sectors will need to evolve but to remain substantial.

Speaking ahead of a special OECD Roundtable Ministerial Meeting chaired by Spain’s Deputy Prime Minister and Minister of Finance Nadia Calviño, to discuss policy responses to the pandemic, OECD Secretary-General Angel Gurría said: “Uncertainty is clearly extreme in the current context, but the implications of that for macroeconomic policies are not symmetric. Policy-makers were right not to be too slow to introduce emergency measures, and they should now guard against being too quick to withdraw them”.

“How governments act today will shape the post-Covid world for years to come,” he added. “This is true not only domestically, where the right policies can foster a resilient, inclusive, and sustainable recovery, but also in terms of how countries cooperate to tackle global challenges together. International cooperation, a weak point so far in the policy response, can create confidence and have important positive spillover effects.”

Presenting the Outlook, OECD Chief Economist Laurence Boone said: “Extraordinary policies will be needed to walk the tightrope towards recovery. Restarting economic activity while avoiding a second outbreak requires flexible and agile policy-making.” She said the safety nets and support currently provided for badly hit sectors would need to be adapted to help businesses and workers move to new activities.

“Higher public debt cannot be avoided, but debt-financed spending should be well-targeted to support the most vulnerable and provide the investment needed for a transition to a more resilient and sustainable economy,” she said.

“Governments must seize this opportunity to build a fairer economy, making competition and regulation smarter, modernizing taxes, government spending and social protection,” she added. “Prosperity comes from dialogue and cooperation. This holds true at the national and global level.”

The Outlook calls for stronger international cooperation to help end the pandemic more quickly, speed up the economic recovery, and avoid harming the catch-up process of emerging-market economies and developing countries. It also argues for encouraging more resilient supply chains, including larger holdings of stocks and more diversification of sources locally and internationally.

For more information about the Economic Outlook as well as OECD work on policy responses to pandemic, visit the online hub on Covid-19.