Global energy demand rose by 2.3% in 2018, its fastest pace in the last decade

PARIS – 26 March 2019 Energy demand worldwide grew by 2.3% last year, its fastest pace this decade, an exceptional performance driven by a robust global economy and stronger heating and cooling needs in some regions. Natural gas emerged as the fuel of choice, posting the biggest gains and accounting for 45% of the rise in energy consumption. Gas demand growth was especially strong in the United States and China.

Demand for all fuels increased, with fossil fuels meeting nearly 70% of the growth for the second year running. Solar and wind generation grew at double-digit pace, with solar alone increasing by 31%. Still, that was not fast enough to meet higher electricity demand around the world that also drove up coal use. As a result, global energy-related CO2 emissions rose by 1.7% to 33 Gigatonnes (Gt) in 2018. Coal use in power generation alone surpassed 10 Gt, accounting for a third of the total increase. Most of that came from a young fleet of coal power plants in developing Asia. The majority of coal-fired generation capacity today is found in Asia, with 12-year-old plants on average, decades short of average lifetimes of around 50 years. 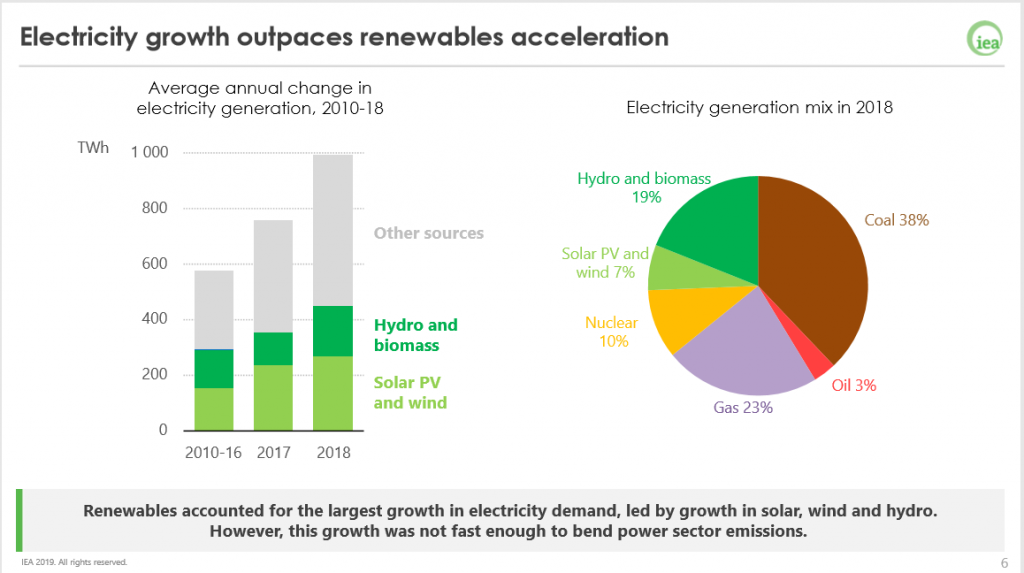 Electricity continues to position itself as the “fuel” of the future, with global electricity demand growing by 4% in 2018 to more than 23 000 TWh. This rapid growth is pushing electricity towards a 20% share in total final consumption of energy. Increasing power generation was responsible for half of the growth in primary energy demand.

Renewables were a major contributor to this power generation expansion, accounting for nearly half of electricity demand growth. China remains the leader in renewables, both for wind and solar, followed by Europe and the United States.

Energy intensity improved by 1.3% last year, just half the rate of the period between 2014-2016. This third consecutive year of slowdown was the result of weaker energy efficiency policy implementation and strong demand growth in more energy intensive economies. “We have seen an extraordinary increase in global energy demand in 2018, growing at its fastest pace this decade,” said Dr Fatih Birol, the IEA’s Executive Director.

“Last year can also be considered another golden year for gas, which accounted for almost half the growth in global energy demand. But despite major growth in renewables, global emissions are still rising, demonstrating once again that more urgent action is needed on all fronts — developing all clean energy solutions, curbing emissions, and spurring investments and innovation, including in carbon capture, utilization and storage.”

Together, China, the United States, and India accounted for nearly 70% of the rise in energy demand around the world. The United States saw the largest increase in oil and gas demand worldwide. Its gas consumption jumped 10% from the previous year, the fastest increase since the beginning of IEA records in 1971.

The annual increase in US demand last year was equivalent to the United Kingdom’s current gas consumption. Global gas demand expanded at its fastest rate since 2010, with year-on-year growth of 4.6%, the second consecutive year of strong growth, driven by higher demand and substitution from coal. Demand growth was led by the United States. Gas demand in China increased by almost 18%.

Oil demand grew 1.3% worldwide, with the United States again leading the global increase for the first time in 20 years thanks to a strong expansion in petrochemicals, rising industrial production and trucking services.

Global coal consumption rose 0.7%, with increases seen only in Asia, particularly in China, India and a few countries in South and Southeast Asia.

Nuclear also grew by 3.3% in 2018, mainly as a result of new capacity in China and the restart of four reactors in Japan reaching pre-Fukushima production levels. Worldwide, nuclear plants met 9% of the increase in electricity demand.

Going Green: The Viability of Road Trips in an Electric Vehicle

Carbon capture and storage: where should the world store CO₂

At the current rate of deployment, 700 million tonnes of CO₂ storage capacity will be added by 2050 – 10% of what is required.