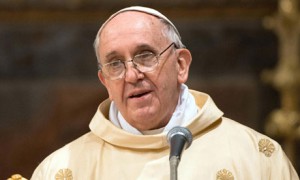 The Vatican July 21. 2015 – Ways to combat climate change and its effects on society’s most vulnerable:  some sixty mayors and local administrators from around the world met at the Vatican this week.

Pope Francis addressed the group and urged mayors to direct their efforts towards the care for the environment and the fight against human trafficking.

The mayors from around the world were in the Vatican for a two-day workshop entitled “Modern Slavery and Climate Change” organized by the Chancellor of the Pontifical Academies of Sciences and Social Sciences.

In his recently released environment encyclical Laudato Si,’ the Pope said caring for the Earth is an urgent moral imperative and that fossil fuel-based global warming puts the poor most at risk. Urban centers are considered some of the biggest contributors to climate change.

Hailing from cities in North and South America, Europe and from developing nations like India and Gabon, many of the officials are committed to environmentally friendly policies aimed at bringing down the carbon emissions that contribute to global warming.

Vancouver’s mayor Gregor Robertson was the only Canadian mayor in attendance. (See video below)

The two day Vatican climate conference comes ahead of the Paris COP-21 climate negotiations in December. Click here to see the YouTube coverage of the events. 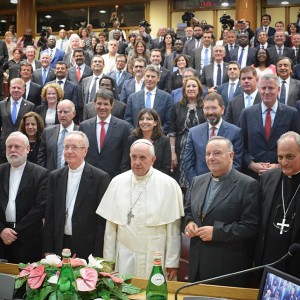 But – he stressed – he also wants U.N. nations to prioritize fighting both human trafficking and the exploitation of the world’s most vulnerable people.

And referring to his recently published encyclical “Laudato Si’”, Pope Francis made it quite clear that the document is not an encyclical on the environment.

It’s a social encyclical – he explained –  because the state of the environment is directly and intimately linked to the life and wellbeing of humankind.

In a presentation at this week’s meeting, the Pontifical Academies of Sciences and Social Sciences said “global warming is one of the causes of poverty and forced migrations, and it favours human trafficking, forced labour, prostitution and organ trafficking.”

Mayors and Local Administrators at the Vatican summit were asked to urge global leaders to take bold action to curb global warming, and to press for approval of the UN’s new Sustainable Development Goals this fall.

Speaking to participants Tuesday, New York Mayor Bill de Blasio announced his city’s plans to reduce greenhouse gas emissions by a further 40 percent over the next fifteen years.  He described Pope Francis’ as “the most powerful voice on this earth for those whose voice is not being heard…he did not convene us here to accept the status quo but to indict it.”

Speaking of the fast-approaching Paris climate summit, de Blasio added, “we need to see it as the finish line of a sprint, and take every local action we can in the coming months to maximize the chance that our national governments will act boldly.”

Governor Jerry Brown, a former Jesuit seminarian, whose state of California has enacted some of the most stringent carbon emissions policies in the U.S., decried “powerful” opposition groups at home which deny global warming and “spend billions on trying to keep from office” people who believe scientific evidence proves the phenomenon exists.

Mitch Landrieu, the Mayor of New Orleans hailed Pope Francis’ words and actions on climate change and said he believes the upcoming papal visit to the U.S. will be transformational and in particular his address to Congress will be “very challenging.”

And this is not the only connection Pope Francis made in his off-the-cuff greeting in which he chose to speak in his native Spanish.

He said huge migratory waves of peoples across the globe are triggered by environmental issues such as desertification and deforestation which leave people and entire communities without the possibility of seeking a livelihood.

Thus – he said – the exodus that takes them into urban centers gives life to human trafficking which brings with it diverse forms of exploitation (be it economical or sexual) of women, children and vulnerable people.

Pope Francis concluded his address with a series of quotes and references to theologian Romano Guardini and his theology of the human person.

And he issued a strong call to all the Mayors present at the event to be aware of these problems and to seek solutions working – he said – from the peripheries towards the center. 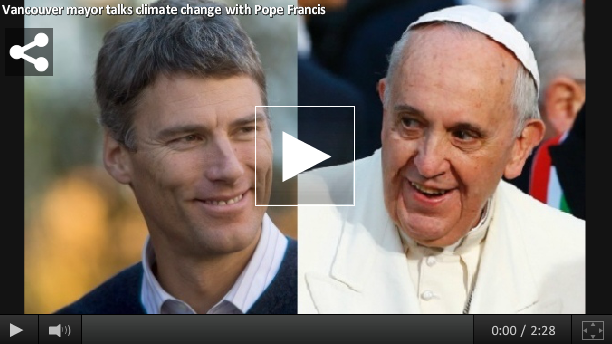