The Top 10 list highlights countries outside of the U.S. that are making significant strides in sustainable building design, construction and transformation, illustrating the ever-growing international demand for LEED green buildings.

The announcement comes at a time of increased international focus on climate change mitigation in the lead up to the United Nations’ COP21 climate negotiations this December.

“At a time when the world needs real leadership to solve the problems facing us all, Canadian business leaders, policymakers and consumers have turned to LEED to show the international community what we can do at the local level to promote real, substantive change,” said Rick Fedrizzi, CEO and founding chair, USGBC.

“It is always encouraging to see highly developed nations such as Canada rally around the idea that increased sustainability does not need to come at the expense of a high standard of living, and that making this type of commitment actually enhances national well being.”

Canada retains its spot as the top country for LEED for the second year in a row. See rankings below. 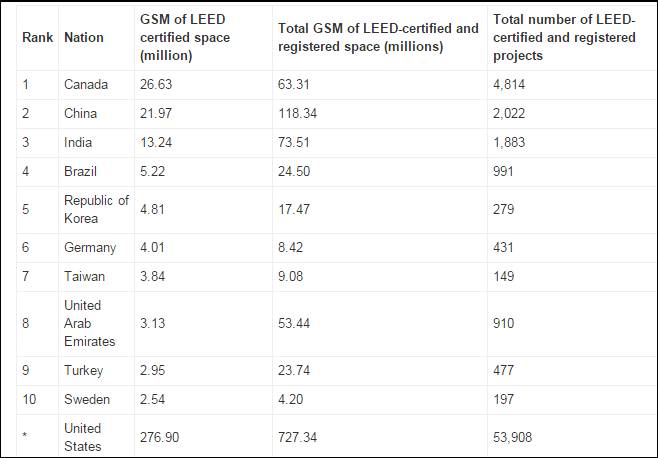 The Canadian government names buildings as the fourth leading cause of greenhouse gas emissions in the country, contributing 12 percent of the country’s overall emissions by sector.

Emissions from the Canadian building sector have dropped in Canada since 2005 even as the population has risen and the national building stock has grown larger.

Given Canada’s climate and its intense heating needs during its harsh winter, this decrease in energy usage demonstrates a strong commitment to transforming the national built environment in ways that promote a healthier, more sustainable future.

“We are extremely proud to be named as the top country for LEED projects internationally again this year,” said Thomas Mueller, president and CEO of the Canada Green Building Council.

“By leading the global adoption of LEED, Canada’s building industry is demonstrating how business and sustainability can go hand in hand to reduce environmental impacts including carbon emissions.

Building owners and developers are increasingly making LEED an integral part of doing business spurring demand for innovative products, technologies and services, and, in the process, creating jobs and positive bottom lines.”

The 10 countries that made the list for 2015 are geographically and culturally diverse, representing seven of the world’s 20 largest single-nation economies by gross domestic product (GDP) (China, Germany, Brazil, India, Canada, South Korea and Turkey), as well as six of the top 11 emitters of greenhouse gases (China, India, Germany, South Korea, Canada and Brazil).

The analysis used to develop the list ranks countries in terms of gross square meters (GSM) and numbers of LEED projects to date. LEED-certified spaces use less energy and water resources, save money for families, businesses and taxpayers, reduce carbon emissions and create a healthier environment for residents, workers and the larger community.

Every day, nearly 172,000 GSM of space is certified using LEED, and there are currently more than 69,800 commercial and institutional projects representing 1.23 billion GSM of space participating in the green building rating system.

An additional 76,500 residential units have been certified under LEED for Homes. LEED projects can now be found in more than 150 countries and territories across the world.

LEED’s international popularity is reflective of the exponential growth occurring within the global green building industry. Increasing consumer demand has pushed the world’s green building market to $260 billion in 2013, and this industry surge has led to a corresponding increase in the scope and size of the green building materials market, which is expected to reach $234 billion by 2019.

Internationally renowned landmarks as diverse as the Empire State Building, the Maracana Stadium and TAIPEI 101 are now LEED-certified spaces that illustrate the impact that sustainable construction and design are having on our shared culture.

At a time when the international community is looking to the UN’s negotiations in Paris as a historically significant chance to come up with real, binding solutions to climate change, the global popularity of LEED is a sign that a ‘green economic miracle’ is well within reach. LEED’s success demonstrates that there are proven, internationally credible solutions to some of the complex questions surrounding climate change mitigation that can help stimulate economic growth while also avoiding harmful economic disruptions.

With buildings accounting for up to 30 percent of global emissions, a commitment to the rapid transformation of the global built environment seems to be one solution that the entire world can get behind.

A sample of notable projects that certified in Canada in 2014 include:

Support for LEED is widespread in Canada, with a highly diverse array of companies and organizations using the green building rating system to further their human health and environmental sustainability agendas.

There are currently 174 USGBC member organizations in Canada representing industries such as product manufacturing, building construction, retail, real estate, education, the non-profit sector and other professional services. There are 11,346 LEED credential holders in Canada, the largest number of LEED professionals existing outside of the United States.