LONDON, 3 July, 2015 – Scientists have yet again warned that weakening ocean circulation in the North Atlantic could deliver a climate paradox − a colder Europe as a consequence of global warming.

A study published in Nature Climate Change found that as sea ice off Iceland and Greenland retreats, the flow of cold, dense water to the bottom of the North Atlantic ocean could be reduced, and therefore weaken the warming effects of the Gulf Stream.

The great submarine current − sometimes called the Atlantic Conveyor − flows south to surface in the tropics as the Gulf Stream, which then flows north again to deliver tropic warmth to European coasts.

However, a slowdown in the natural overturning of the ocean could weaken the Gulf Stream, which in turn could cool the atmosphere over the British Isles and western Europe.

“A warm western Europe requires a cold North Atlantic, and the warming that the North Atlantic is now experiencing has the potential to result in a cooling over Western Europe,” says Kent Moore, a professor of physics at the University of Toronto Mississauga, Canada. 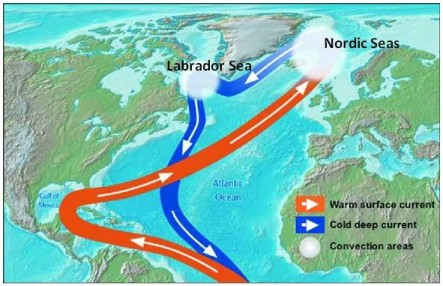 Such a possible collapse of a natural oceanic system is predicated as one of the irreversible tipping points that could result in calamitous climate change.

Scientists have twice warned in the past six months that such change could be irreversible, unless governments jointly decide to dramatically reduce greenhouse gas emissions from the combustion of fossil fuels by switching to renewable sources of energy.

Another research group reported in March this year on how the changing salinity of the northern ocean waters − because of the increasing flow of meltwater from land-borne glaciers − threatened a weakening of the Atlantic Conveyor.

In the latest study, Professor Moore and colleagues from Norway, the US and the UK looked not at changes in ocean salinity, but at the exchange of heat between sea and air.

Climate is driven by contrasts, and the flow of heat between water and wind in winter has weakened by around 20% since 1979. The Arctic is the fastest-warming region of the planet, and changes in the polar climate can have dramatic consequences for the temperate zones.

Prof Moore and his colleagues looked at wintertime data from the Iceland and Greenland Seas between 1958 and 2014, then used computer simulations to model potential changes to the Conveyor − more formally known to oceanographers and climate scientists as the Atlantic Meridional Ocean Circulation.

The warm current loses its heat to the atmosphere as it moves north, and water that is both cold and salty is denser and more likely to descend.

The most effective place for such a process to happen is at the edge of the sea ice. If the sea ice retreats, then so does the region of maximum heat exchange. For the past 10,000 years or so, this heat exchange has happened at the ideal spot for surface waters to sink. Any change might not be for the better.

The Gulf Stream is the agency that makes Britain, for example, about 5°C warmer than Labrador in Canada, on the same latitude. A British government chief scientific adviser once calculated that the Gulf Stream delivered the warmth of 27,000 power stations. So if it weakens, Europe could start to feel the chill.

“The heat exchange is weaker – it’s like turning down the stove 20%,” Prof Moore says. “We believe the weakening will continue and eventually cause changes in the Atlantic Meridional Overturning Circulation and the Gulf Stream, which can impact the climate of Europe.” – Climate News Network