London, 3 July 2015 – Governments should rethink the role of coal in energy supply as the scale of new investments being made in unabated coal-fired electricity generation poses the most urgent threat to our climate, OECD Secretary-General Angel Gurría said today.

Countries should conduct a more rigorous evaluation of the true costs of coal. With prices failing to fully account for the environmental, health and financial costs of coal, many of the coal plants being built today may have to be shut down before the end of their economic lifetimes, Gurría stressed in a lecture hosted by the London School of Economics and Aviva Investors in association with ClimateWise.

If low-carbon alternatives prove not to be affordable relative to coal generation for some developing countries, donor countries should mobilise finance to close the financial cost gap. 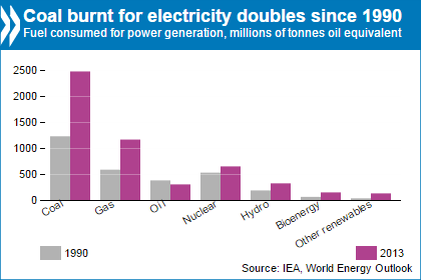 “Coal is not cheap,” Gurría said. “Governments need to be seriously sceptical about whether coal provides a good deal for their citizens.”

Without new mitigation measures, coal generation is projected to emit more than 500 billion tonnes of CO2 between now and 2050 which would eat up around half the remaining carbon budget consistent with keeping a global temperature rise below 2 degrees Celsius.

He said the carbon clock is ticking and the Paris COP21 climate conference in December must give a clear and credible signal that governments are determined to go for a higher level of ambition.

“The mitigation contributions currently tabled by countries do not get us to where we need to be by 2030. Calling something a process doesn’t guarantee an outcome. We have been in a process for over 20 years and so far the commitments simply don’t add up,” he said.

Continued investment in coal is one of many ‘misalignments’ between climate goals and countries’ policies in other domains. A new report published today by the OECD, the International Energy Agency (IEA), the Nuclear Energy Agency (NEA) and the International Transport Forum (ITF), Aligning Policies for a Low-carbon Transition, reveals how policy misalignments undermine climate action in areas from tax to trade, electricity market regulation and land use.

Such policy incoherence limits the effectiveness of countries’ climate change efforts and increases the cost of the low-carbon transition.

Gurría urged governments to diagnose and consider what needs to be done to resolve such misalignments, starting by demanding that each ministry regularly report on which of its policies run counter to desirable climate outcomes.

More information on Aligning Policies for a Low-carbon Transition.