But, over the same period, Europe could also begin to get colder as a consequence of a drop in solar activity, and a century-long chill could be on the way, according to a study of long-period climate cycles. 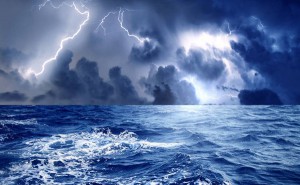 And if global warming accelerates, and average global ocean temperatures rise by 6°C or more, most of the living, breathing world could in any case begin to suffocate, according to ominous calculations by a mathematician. At some point, the providers of oxygen could begin to perish.

All three uncomfortable projections were published as 30,000 delegates, politicians, observers, pressure groups, and journalists gathered in Paris for COP21, the UN summit on climate change, which is meeting to try to forge an agreement that could, ultimately, limit global warming to a planetary average of 2°C or less.

Simone Russo, a geophysicist, and colleagues from the European Union Joint Research Centre at Ispra in Italy report in Environmental Research Letters that they developed a heatwave magnitude index to cope with a problem once considered improbable for temperate Europe − extremes of heat.

The index is a tool for statistical analysis, and provides a way of matching bygone events with possible future extremes. Deaths in Europe accounted for 90% of global mortality from heat extremes in the last 20 years. And there could be more on the way.

“Even if global mean temperatures don’t increase too much, we’ll see more extreme events,” Dr Russo says. “These will be hotter, longer and more frequent.”

Scientists from universities in Northumbria, Hull and Bradford in the UK, and from Lomonosov State University in Moscow, are not so sure. Their study in Scientific Reports journal examines the rhythms of the sun, and foresees a possible minimum in solar magnetic activity, which has in the past been linked to extended cold periods in the Earth’s climate history.

The latest research tries to reconstruct climate from 1200 AD and make a forecast until the year 3200, based ultimately on the count of sunspots. And the scientists think a new low is about to begin.

“Studies have shown that, over the last 400,000 years, there were five global warming and four ice ages,” says Elena Popova, a physicist at Lomonosov Moscow State University. “What caused them? How much can solar activity affect the weather and climate change? This question is still not solved and is an extremely relevant and interesting challenge for the various researchers around the world.”

Not everyone sees a clear link between sunspot numbers and periodic swings in global temperature. But there isn’t much argument about the importance of plants in the generation of the oxygen for the rest of creation − and an estimated two-thirds of this comes from phytoplankton in the oceans, which cover 70% of the globe.

“The rate of oxygen production depends on water temperature and hence can be affected by the global warming,”, say Sergei Petrovskii, professor of applied mathematics, and colleagues at the University of Leicester, UK, in the Bulletin of Mathematical Biology.

The scientists made a mathematical model of the processes that control ocean productivity, and then added higher levels of warming. Were ocean temperatures to rise by an average of 6°C by 2100, the increase would start to disrupt the process of photosynthesis.

Right now, this is a less than likely outcome: 184 of the 190 nations now engaged in the COP21 summit have submitted pledges to reduce the carbon dioxide emissions that generate greenhouse gases and drive global warming, and the latest forecast is that, were all these pledges honoured, global warming could perhaps be contained to within 3°C.

If these were improved upon – and that, too, is the ambition behind the climate summit – then the warming could be limited to 2°C. But the predictions of the Leicester team are a reminder of the high price of failure.

They warn: “Our results indicate that the depletion of atmospheric oxygen on a global scale (which, if it happens, obviously can kill most of the life on Earth) is another possible catastrophic consequence of global warming, a global ecological disaster that has been overlooked.” – Climate News Network