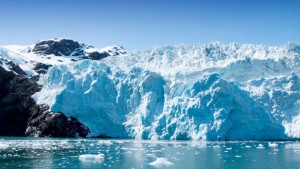 LONDON, 1 October, 2016 – Greenland is going up in the world. As the biggest lump of ice in the northern hemisphere melts ever more swiftly, so the bedrock of the enormous island is rising in response to this weight loss at rates of up to 12mm a year.

And since scientists have been using surface altitude measurements to calculate melting rates, this means that the island must have been shedding ice at a greater rate than anybody thought.

But the same research, published in Science Advances journal, also reveals that since the end of the last ice age the drainage basins in southeast Greenland, where the bedrock rise is greatest, may have tipped enough ice into the sea to raise sea levels 1.5 metres.

That Greenland is losing ice at an accelerating rate is not news. Glaciers are flowing much faster, surface ice is running away at increasing rates, and bedrock temperature flow has always been a factor.

What the scientists have now established is that natural forces sometimes work in unexpected ways.

At the heart of this research is a phenomenon known to geophysicists as isostasy. Pile up kilometre-high sheets of ice on a landscape, and the bedrock below it will depress. Turn up the heat, melt the ice, and the downtrodden bedrock will start to spring up again.

This does not normally happen at dramatic rates, but the case of southeast Greenland could be special.

All the world’s landmasses are on the move − laterally as well as vertically − and 40 million years ago Greenland slid slowly over the same source of hot molten rock that now drives volcanic eruptions and superheated geysers in Iceland.

This softened the rocks below eastern Greenland, causing a different level of isostatic response.

So the thinking now is that the southeastern basins of Greenland have already been responsible for 77% of the total ice loss to the ocean between 1900 and 1980.

But researchers could not be sure of this process until they had matched changes in the bedrock − as measured by GPS satellite systems − with readings from a satellite system called GRACE, which stands for Gravity Recovery and Climate Experiment, and which measures overall mass loss.

Then the researchers, led by Shfaqat Abbas Khan  associate professor at the Danish Technical University’s National Space Institute, were able to tease out the difference between bedrock uplift and ice loss.

In essence, the research is an exercise in problem solving − an attempt to calculate all the details and get the big sums right.

“It is notoriously difficult to estimate the long-term past contribution of Greenland to sea level rise,” says Jonathan Bamber, professor of physical geography at the University of Bristol in the UK, and a co-author of the report. “Our new results provide a unique insight into the millennial timescale contribution of the ice sheet.

“We find a remarkable similarity between how the ice sheet behaved in the past and what it is doing now, with potential implications for future mass loss trends.”

Another of the report’s authors, Professor Michael Bevis, head of geodetic science at Ohio State University in the US, says: “It’s a fairly modest correction.

“It doesn’t change our estimates of the total mass loss all over Greenland by that much, but it brings a more significant change to our understanding of where within the ice sheet that loss has happened, and where it is happening now.” – Climate News Network