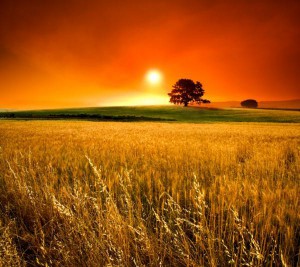 For every 1°C rise in global average temperatures, the harvest per hectare of the grain that feeds more than half the planet will fall by an average of 5.7%.

This average conceals huge variation at local levels. At Aswan in Egypt, a 1°C rise could reduce harvests by between 11% and 20%. At Krasnodar in Russia, productivity could fall by 4% or 7%.

Global demand for food is likely to rise by 60% by mid-century, as the world’s population soars to an estimated 9 billion. And wheat is one of the staples that nourish the entire planet.

Although 195 nations voted at the Paris climate conference last December to take steps to contain global warming to 1.5°C if possible, and 2°C at most, little concerted action has yet been taken.

The wheat warning is not new: in effect, more than 60 scientists from more than 50 institutions worldwide report in Nature Climate Change that they have looked at the predictions. They have tested them using three entirely independent approaches, and data from just one grain crop – and they get the same bleak answer about reduced yields.

International concern over food security has gone hand in hand with anxiety over potentially catastrophic climate change as a consequence of the combustion of fossil fuels and the rising levels of greenhouse gases in the atmosphere.

One research group has warned that extreme weather – predicted to increase with global warming – presents an inherent hazard to agriculture as drought, floods or simply a heatwave at the wrong moment in the growing season could devastate a crop.

Another study has looked directly at the evidence so far, and matched harvest data with regional temperatures, to find that yield per field in Europe is already being affected.

And a third group has looked not at food crops as such, but at the response of the grass family to climate change. As wheat, barley, oats, maize and rice are all grasses, developed by thousands of years of selective breeding to deliver maximum yields in the traditional farmlands, these are likely to be hit − and, once again, the poorest people and the subsistence farmers will be hit hardest.

But puzzles remain. Although the outlook for harvests has been gloomy, the observed response of the vegetable world to temperature and climate changes so far has been ambiguous.

One observed outcome has been that as carbon dioxide levels in the atmosphere creep upwards, many plant species have achieved more growth with less water. This is called the fertilisation effect, and it means that, overall, even the drylands that are home to 2 billion people have become perceptibly greener.

Other research has confirmed the observation, but warned that changing levels of evapotranspiration − the sum of evaporation and plant transpiration from the Earth’s land and ocean surface to the atmosphere − from shrubs, trees and grasses could actually intensify future heatwaves.

So researchers from Nanjing Agricultural University in China and partners in India, Thailand, Australia, Canada, the US, Europe and the UK took a closer look.

They used three different statistical techniques, including one based on historical records, to model the future under a changing climate regime.

No assumptions were made that plant breeders would be able to adapt their crops in time, and the researchers made no allowance for the CO2 fertilisation effect. They just looked at what would happen to harvests worldwide as temperatures edged upwards.

They based one approach on dividing the world into a geographical grid, with the climate and crop data for each region. The second looked at evidence from 30 individual field sites, worldwide, that could represent about two-thirds of the global wheat crop.

Then they studied what modellers call “statistical regressions” − based on global and country-level data for rice, sorghum, barley, soybean, maize and wheat − to see what that delivered.

They got more or less the same answer from all three approaches: that a 1°C temperature increase would mean that global wheat yield would decline between 4.1% and 6.4%, with an average of 5.7%.

Warmer regions were most likely to experience the greatest decline in yield. China, India, the US and France would all experience much the same impact. Russia – which grows wheat under cooler conditions – would be less affected.

“However, some or all of the negative global warming impacts on wheat yield might be compensated by increasing atmospheric CO2 concentrations under full irrigation and fertilisation.” – Climate News Network