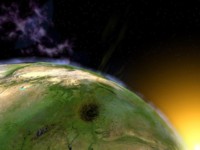 LONDON, 28 July, 2015 − Global warming has seemingly slowed because the top 100 metres of the Pacific Ocean has cooled −  or it could be because natural climate cycles keep the atmosphere relatively cool for three decades and then warming accelerates for the next 30 years or so.

But while climate scientists are still trying to understand precisely why the rate of global warming this century has apparently slowed, they predict that the record-breaking temperatures in 2014 will be surpassed this year.

Potential explanations for this so-called pause are like London buses: you wait for a while, and then two come along at once.

Researchers from the US report in the journal Science that the planet has absorbed more heat than it has radiated back into space, but the extra warming is trapped, for the moment, somewhere between the 100 metre and 300 metre layers of the Pacific and Indian Oceans. That is, the warming is there, but you just can’t feel it yet.

“In the long term, there is robust evidence of unabated global warming,” says Veronica Nieves, a research physicist at the NASA Jet Propulsion Laboratory in California.

Meanwhile, an essay in The Geoscientist argues that natural decadal climate cycles and the continuous rise in greenhouse gases from human combustion of fossil fuels are interacting in ways that mean that the rate of change is not a smooth upward curve, but a series of steps − some steep, some flat.

Average global temperatures have risen 0.9°C since the start of the 20th century. But research scientist Andy Chadwick, of the British Geological Survey, writes: “Anthropogenic emissions are not the only game in town, and that is why the observed temperature variation is more complex.”

Neither argument excludes the other. Both could be true, and each could be only part of the explanation. So could some of the other published analyses.

Scientists have recently argued that the missing heat may be deep in the Atlantic, or driven to depths by the Pacific trade winds,  or affected by natural cycles in both oceans.

One group has reasoned that a recent burst of low-level volcanic activity could be screening the sunlight and lowering temperatures, while others say they never expected global warming to be consistent.

Yet others have proposed that warming continues and that the anomalies may lie in the way the data has been collected, or that even if the average temperature rises seem to have slowed, the increase in extremes of heat around the world suggests otherwise.

But much of such argument has been supported by computer simulation and “what-if” logic.

Dr Nieves and her colleagues looked at direct ocean temperature measurements collected over the last 20 years − some of them from a network of 3,500 floats known as the Argo array − to build up a picture of heat driven below the ocean surface, piling up in the Western Pacific, and even “leaking” into the Indian Ocean.

This is while the water surfaces remained unexpectedly cool, during a 30-year phase known to oceanographers and climate scientists as the Pacific Decadal Oscillation.

Dr Chadwick went back to records dating from the close of the 19th century to show a clear warming of more than 100 years, but divided into 30-year “ramps” when temperatures rose steeply, and “steps” when temperatures were roughly constant or fell very slightly, in ways consistent with natural oscillations in ocean and atmosphere.

Temperatures fell between 1880 and 1910, and between 1945 and 1975, and had “flattened off” in the 21st century. The long-term trend correlated closely with the rise in carbon dioxide levels in the atmosphere. And simulations of the future suggested more rapid warming to come.

“It is clear that, in coming decades, temperatures will continue to rise,” Dr Chadwick predicts, “albeit not at a uniform rate.” – Climate News Network

As we prepare for the Paris Climate Summit, a look at what’s changed since Copenhagen

Canada lacks a strategy to support its clean energy sector