Honey producers Travis and Chiara Bolton keep bees at three solar farms where developers seeded native plants underneath and around panels. “The advantage to these sites is that they are intentionally planted for pollinators,” says Travis Bolton. “At these sites they’re really trying to get them back to a native prairie, and that’s a benefit to us.”

Native plants have replaced turfgrass and gravel as the go-to bedding for solar gardens in Minnesota, a result of a 2016 state standard that outlines how developers can create pollinator-friendly environments. More than half of the 4,000 acres (1,600 hectares) of solar farms built in 2016 and 2017 feature native plants that not only benefit pollinators but also beautify the site. 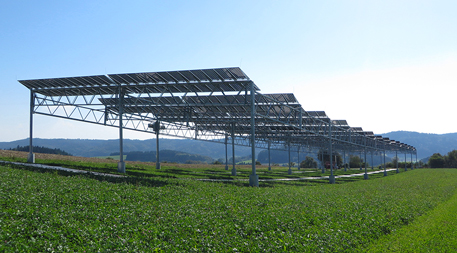 More than half of solar farms built in Minnesota in recent years include pollinator-friendly plants as one of their features. Photo courtesy of Bolton Bees

Although Minnesota may be in the vanguard of encouraging solar farm developers to grow native plants, it is far from the only place studying how solar farms can harvest more than just energy. Universities in the United States, Germany and elsewhere are testing the concept of “dual use farming,” as some advocates call it, where crops grow below canopies of solar panels. They are finding they grow just fine — and, in some cases, better than crops in full sun.

All Kinds of Benefits

Adding plants to solar farms offers all kinds of benefits to the facilities’ primary aim of reducing carbon emissions and expanding renewable energy.

“Solar development is happening on a massive scale as lands are being converted from agricultural land or unused land into solar projects,” says Jordan Macknick, energy-water-land lead analyst with the National Renewable Energy Laboratory (NREL), which funds research on the impact of native and crop plants grown in solar farms. “That represents an amazing opportunity to improve our agriculture and improve our food security while developing energy at the same time.”

Adding plants to solar farms offers all kinds of benefits to the facilities’ primary aim of reducing carbon emissions and expanding renewable energy.

And native and crop vegetation can help improve the health of pollinators, which are threatened by habitat loss, pesticide poisoning, poor nutrition, disease, decreased genetic diversity and a host of other factors. As a result, managed honeybee colonies used for honey production declined from 5.7 million in the 1940s to around 2.7 million today. Pollinators have an enormous impact on the economy, too, by annually contributing US$24 billion to the nation’s economy.

With more land being devoted to solar energy production, the idea of making those acres pollinator friendly seems to make ecological and economic sense. “Incorporating habitat into these solar farms across the nation is a good way to promote and protect pollinator health,” says Val Dolcini, president and CEO of the San Francisco­–based Pollinator Partnership, a non-profit organization promoting pollinator environments. 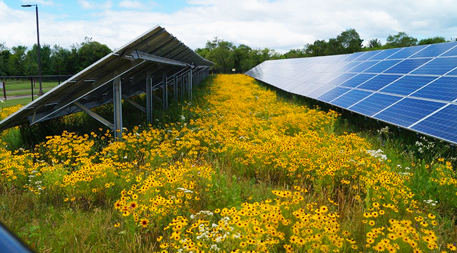 Plantings can improve the aesthetics as well as the food production capacity of solar farms. Photo courtesy of Prairie Restoration Inc.

Under-panel native plants benefit not just their immediate solar farm surroundings but nearby cropland. Lee Walston, an ecologist at Argonne National Laboratory, says pollinating insects roam beyond solar installations to other agricultural fields, where they help increase production. Native plantings offer refuge for declining species such as monarch butterflies and rusty patched bumblebees while serving the additional purpose of controlling stormwater and erosion, he adds.

Native gardens and vegetables also offer an aesthetic benefit having nothing to do with panels or agricultural production, advocates say. They offer a more colorful and pleasing visual tapestry rather than the monolithic green of turf grass or the gray of gravel, a feature not to be underestimated at a time when some communities seek to stop solar garden expansion due in part to the uniform monotony of endless rows of panels.

Pilot projects in Massachusetts, Arizona, Germany, China, Croatia, Italy, Japan and France look encouraging for mixing crops with solar panels, referred to as “dual use” farms because they offer both agricultural and electrical production. “So far, the pilots have been extremely successful in showing that you can grow crops and make electricity at the same time,” Macknick says. 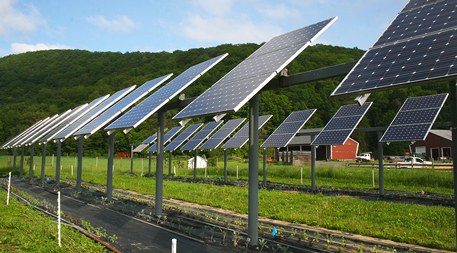 University of Massachusetts researchers have found that with the right solar panel spacing, crop yields virtually equal those of open plots. Photo courtesy of UMass

A dual-use farm operated by the University of Massachusetts­–Amherst grows a variety of plants — peppers, beans, cilantro, tomatoes, swiss chard, kale — below solar panels elevated roughly 7.5 to 9 feet (3 meters) or more above ground to allow for easier harvesting mainly by hand. Project researchers have found that 1- to 1.2-meter (3- to 4-foot) gaps between panel clusters led to crop yields almost the same as what they would have been in full sun sites.

One of the first concepts for mixing solar and agriculture, dubbed “agrophotovoltaics” (APV), was developed more than three decades ago by physicist Adolf Goetzberger. The research institute Goetzberger created — the Fraunhofer Institute for Solar Energy Systems — finally got around to building its own dual-use farm on one-third of a hectare (just over three-quarters of an acre) at an existing farm cooperative a few years ago. The institute elevated 720 solar panels high enough for farm machinery to harvest plants underneath and nearby, according to a 2017 press release.

The researchers planted wheat, potatoes, celeriac and clover grass in the open and under the panels and compared the yields. Solar shading decreased production 5.3 percent to 19 percent. Yet electricity from the panels, which capture both indirect and direct light, was used to power a crop processing plant and electric farm machinery, offsetting those costs and increasing land use efficiency by 60 percent. 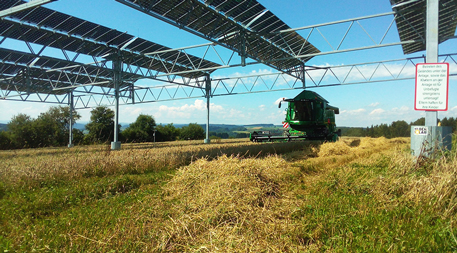 While the farm made a profit, the research team seemed a bit wary of claiming the approach could work everywhere at any scale. Project manager Stephan Schindele said in the press release that “in order to provide the necessary proof-of-concept before market entry, we need to compare further techno-economical applications of APV, demonstrate the transferability to other regional areas and also realize larger systems.”

Similarly, agriculture faculty members at the Josip Juraj Strossmayer University of Osijek in Croatia grow shade-happy organic vegetables beneath solar canopies on a local farm operated partly by faculty members. The energy generated goes to power the farm’s irrigation system and farm machinery. In Austria, an entrepreneur created a system similar to APV but using fewer stationary poles by placing panels on a cable infrastructure in an effort to reduce costs and potential accidents involving farm machinery. APV systems are being tested in another part of Germany and in several other countries.

Greg Barron-Gafford, associate professor in the School of Geography and Development at the University of Arizona, has worked on a solar “agrivoltaic” pilot project — basically, the American version of APV — for two years. Tucson public schools with existing solar canopies are being used, as well as the university’s Biosphere 2 research and public education center. Focused initially on reducing the heat island effect of solar panels, the project morphed into one testing crop yields under panels. 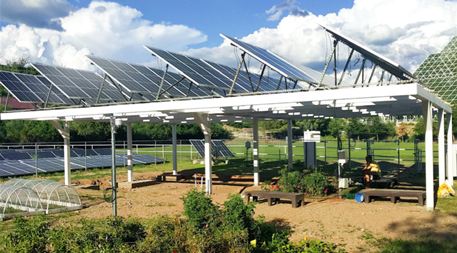 At an arid Arizona research site, crops produce under solar panels needed half as much water as those grown in the open. Photo courtesy of Greg Barron-Gafford

A first run at a salsa garden of cilantro, pepper and tomato “was awesome,” Barron-Gafford says. Crops grown underneath the panels required only half the water of those growing out in the open and grew well in the microclimate beneath the panels. “The plants seem to love the modulated temperatures,” he says.

Panels protect the plants from frost, allowing a longer season for avocados, cilantro, peppers, tomatoes and mangos. In late spring researchers began harvesting a winter crop of carrots, kale, chard and lemongrass. “It’s really been something to watch,” he says.

The experiment found other advantages to the panels as well. The skin temperature of people harvesting crops underneath the panels was 25 degrees cooler than those working out in in the sun, no small matter in a state with scorching summers. And some claim the shade-grown produce tastes better than conventionally grown crops.

Barron-Gafford would like to try the dual-use concept out in collaboration with a community-supported agriculture (CSA) farm that would involve at least 10 acres of cropland under solar panels, he says. The extra cost of adding a solar canopy over crops could be paid for by the 5 percent gain in power production seen in panels in Arizona, reduced maintenance and premium pricing for solar-grown produce.

Despite the promising results of pilot dual-farm projects the idea of a future where American farms will be covered by solar canopies is not likely anytime soon. Rob Davis is director for the Center for Pollinators in Energy at the nonprofit Fresh Energy in St. Paul. The huge scaffolds holding solar panels cost a great deal of money, he says, and one bad turn by a farm tractor driver hitting a post could bring down hundreds of thousands of dollars of solar panels.

“There are a lot of different ways to design solar arrays that provide significant benefits to agriculture.” – Rob Davis

In places where agricultural land is tight and electricity prices high, such as Europe, the economics might play out in favor of dual-use farms. In the United States, however, farmland remains relatively plentiful and acres of canopies are unlikely to be feasible unless energy and agricultural markets change, he says.

“There are a lot of different ways to design solar arrays that provide significant benefits to agriculture,” Davis says. “One of those ways that is certainly the most cost effective — and continues the accelerated rate of large scale solar needed to address climate change — is creating pollinator habitat in and around solar projects.”

Native plants have their own challenges, such as the perception of higher up-front planting costs partly mitigated by less required maintenance. Not all a solar farms’ neighbors are in love with natives, either, due to their sometimes less-than-tidy appearance. Yet Davis argues American farmers are on board with more native habitats because without pollinators their livelihoods could be at risk.

“They understand the need to keep pollinators alive and in abundance” to seed the fruits and vegetables they grow, to maximize yields and to avoid more regulation, he adds. “This opportunity unlocks private sector dollars and deploys solar energy capital in investing in high quality pollinator habitat that is urgently needed in agriculture.”

Editor’s note: Frank Jossi is Minnesota correspondent for Midwest Energy News, an editorially independent publication of Fresh Energy. Rob Davis, who is quoted in the article, is the director of Fresh Energy’s Center for Pollinators in Energy.

Article reprinted with permission from ensia

A Blockchain Crash Course: How It Can Enable the Clean, Smart Grid

Millennials Choose to Rent Instead of Buy: What’s the Environmental Impact?