Increasing energy investment could cut premature deaths by half – report 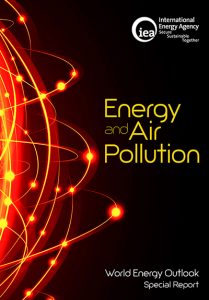 IEA strategy based on existing energy technologies and policies can cut 50% of pollutant emissions, the fourth-largest threat to human health, by 2040

London, 27 June – Each year an estimated 6.5 million deaths are linked to air pollution with the number set to increase significantly in coming decades unless the energy sector takes greater action to curb emissions.

Air pollution is a problem felt around the world, particularly the poorest in society. No country is immune as a staggering 80% of cities that monitor pollution levels fail to meet the air quality standards set by the World Health Organization.

Premature deaths from outdoor air pollution are projected to rise from 3 million today to 4.5 million by 2040, concentrated mainly in developing Asia. Meanwhile, premature deaths from household air pollution will decline from 3.5 million to 3 million over the same period, although they continue to be heavily linked to poverty and an inability to access modern energy. 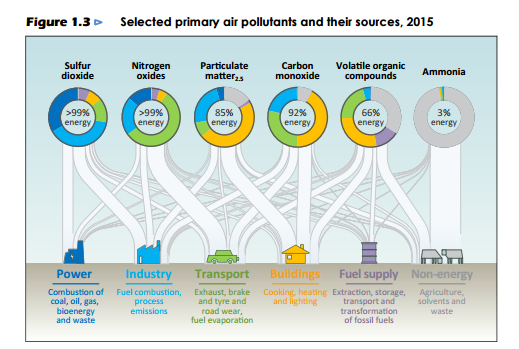 Energy production and use – mostly from unregulated, poorly regulated or inefficient fuel combustion – are the most important man-made sources of key air pollutant emissions: 85% of particulate matter and almost all of the sulfur oxides and nitrogen oxides.

Millions of tonnes of these pollutants are released into the atmosphere each year, from factories, power plants, cars, trucks, as well as the 2.7 billion people still relying on polluting stoves and fuels for cooking (mainly wood, charcoal and other biomass).

In the central outlook of the WEO special report, growing attention to this issue and an accelerating energy transition post-COP21 puts global emissions of these pollutants on a slowly declining trend to 2040.

However, the problem is far from solved and global changes mask strong regional differences: emissions continue to fall in industrialised countries. In China, recent signs of decline are consolidated. But emissions generally rise in India, Southeast Asia and Africa, as expected growth in energy demand dwarfs policy efforts related to air quality.

“Clean air is a basic human right that most of the world’s population lacks,” said IEA Executive Director Fatih Birol. “No country – rich or poor – can claim that the task of tackling air pollution is complete.”

“But governments are far from powerless to act and need to act now. Proven energy policies and technologies can deliver major cuts in air pollution around the world and bring health benefits, provide broader access to energy and improve sustainability,” he added.

The regulations will contribute significantly to reducing emissions that contribute to smog and acid rain including 2,000 kilotonnes of nitrogen oxide emission reductions in the first 19 years. These reductions are equivalent to taking all passenger cars and trucks in Canada off the road for about 12 years.

These regulations will also mean healthier communities for Canadians. It is estimated that the regulations will prevent hundreds of premature deaths, approx. 350,000 days with asthma, and more than 1 million days of activity restricted by poor air quality by 2035. 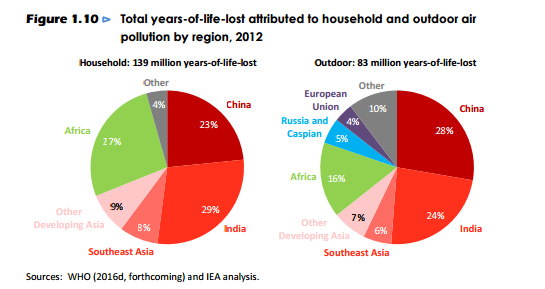 A Clean Air Scenario demonstrates how energy policy choices backed by just a 7% increase in total energy investment through 2040 produce a sharp improvement in health.

The IEA strategy for cleaner air requires the implementation of a number of proven policies. Actions to deliver access to clean cooking facilities to an additional 1.8 billion people by 2040 are essential to reducing household emissions in developing countries, while emissions controls and fuel switching are crucial in the power sector, as is increasing energy efficiency in industry and emissions standards that are strictly enforced for road transport.

Overall, the extra impetus to the energy transition means that global energy demand is 13% lower in 2040 than otherwise expected and, of the energy that is combusted, three-quarters is subject to advanced pollution controls, compared with only around 45% today.

“We need to revise our approach to energy development so that communities are not forced to sacrifice clean air in return for economic growth,” said Dr Birol. “Implementing the IEA strategy in the Clean Air Scenario can push energy-related pollution levels into a steep decline in all countries. It can also deliver universal access to modern energy, a rapid peak and decline in global greenhouse-gas emissions and lower fossil-fuel import bills in many countries.”

The World Energy Outlook Special Report on Energy and Air Pollution is available for free download on the IEA website.

More details on Canada’s new emissions standards will be available when the regulations are published in the Canada Gazette, Part II, on June 29, 2016.